Louisville Restaurants We had a chance to eat at four Louisville restaurants (excluding the pick-up meals at the Derby). Two of these were on Restaurant Row (Bardstown Road) and two were downtown. We can’t say that we were especially impressed by any of the four. However the food here was waybbetter than the food we […] 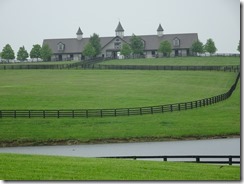 The area between Louisville and Lexington Kentucky (in which Frankfort is roughly in the center) is more than history. It is also the center of Kentucky Bluegrass county—home to more than 450 horse farms, more than 90 Saddlebred farms (on which show horses are raised and trained) and over 250,000 horses. These farms produce some […] 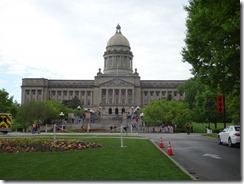 Frankfort Kentucky, which is located about halfway between Louisville and Lexington, was founded in 1786 and established as the state capitol (as a compromise between the two surrounding cities) in 1792. The city’s oldest neighborhood, which was laid out shortly after the founding, still contains about 40 registered historic buildings. While a number are of […]