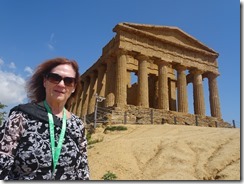 Agrigento Our interest in going to Agrigento was primarily because it was close to the Valley of the Temples. The old town of this moderately-sized, southern Sicilian city has some interesting medieval streets and 13th century churches such as its Duomo, Santo Spirito and Santa Maria del Greci (the later of which was built on […]