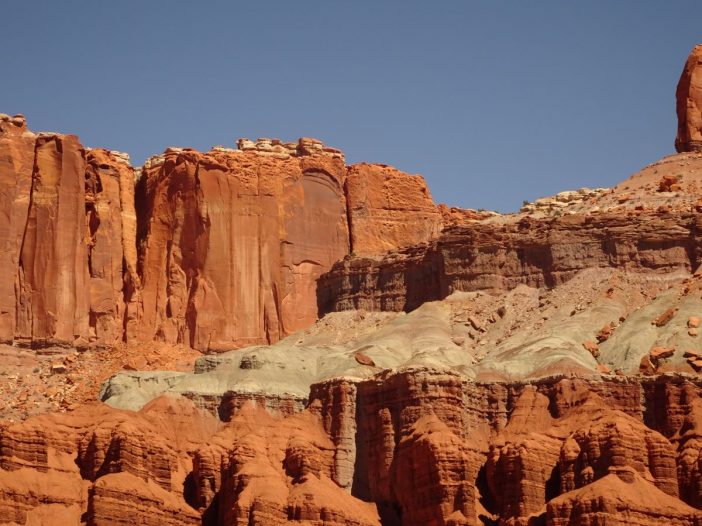 Capitol Reef National Park is in south-central Utah in red rock country. It was named for a combination of the eroded, white Navajo sandstone dome that was thought to resemble the U.S. Capitol Dome and the solid wall of steep, red rock barrier that explorers described as a reef of rock. We made a brief stop while we were in the area.

Capitol Reef National Park’s most iconic feature is a Waterpocket Fold. This “wrinkle” in the earth is a geologic monocline that extends almost 100 miles. It was formed from the process of deposition, uplifting, fracturing, and erosion. It holds rainwater and supports life in the area. The park is also known for its striking concentration of huge cliffs, domes, and monoliths, many of which are brilliantly multi-colored with layers and blocks of:

The Visitor Center describes the park’s plant and animal life, the millennia of paleo-Indian and modern tribes (who left petroglyphs and pictograms), John Fremont’s initial 1853 exploration of the area, and the establishment of the small (a maximum of ten families at a time) Morman farming community of Fruita in 1880. Remnants of town include the one-room schoolhouse and community center, the blacksmith shop, one home, and the fruit and nut tree orchard that sustained the community.

We made another very brief first-time visit intended primarily to determine if we should spend more time at the park on our next visit. Unfortunately, the visitor center was closed the one day of the week we were there. Nor could we find any maps to follow. So we explored on our own.

The large, 2 million-acre site is divided into three regions:

This combination represents and highlights most of the geological features that characterized the entire region from the Grand Canyon to Bryce National Parks. It has multiple, river-carved canyons, multicolored mesas and spires, arches and natural bridges, not to speak of great biological diversity, multiple archeological sites, fossils, petrified wood, remains of prehistoric dwellings, and petroglyphs.