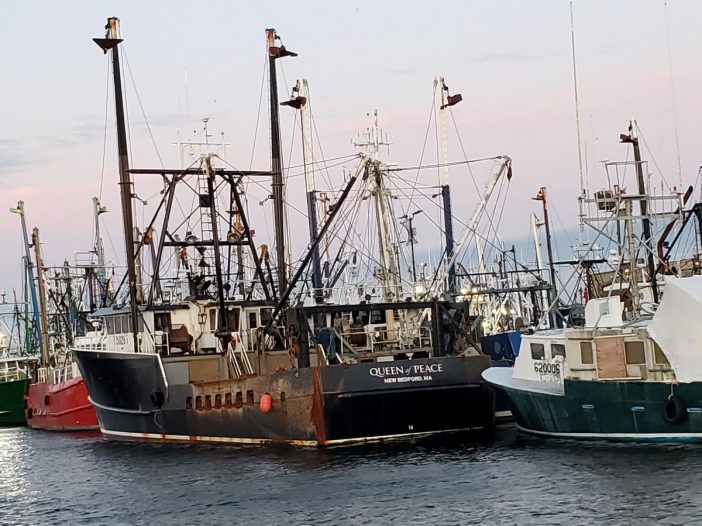 New Bedford Massachusetts was settled initially by Wampanoag tribes. English Quaker colonists bought the land in 1652 and established a colonial settlement that would later become the city. Although it was originally an agricultural and fishing community, its location and harbor made it well suited to capitalize on the 19th-century thirst for whale oil, which was the cleanest, brightest burning fuel for lamps. By the mid-19th century, New Bedford controlled over half the nation’s whale oil industry. While the income from whale oil was heavily concentrated in the hands of a relatively small number of whaling ship owners, agents, and merchants, their wealth made New Bedford the highest per capita income city in the country. Unfortunately, the wealth was not shared with the Wampanoag, or the Cape Verdean, Azorean, Irish, and West African immigrants (and later in the century, the Portuguese and other immigrants who crewed many of the ships.

From Whale Oil to Water Power to Seafood

Whale oil, however, was effectively eliminated from the market by the discovery of oil in Pennsylvania and the availability of refined petroleum products. The industry had all but disappeared by WWI. By this time, forever, factory owners had discovered the power generation capabilities of New Bedford’s rivers and turned it into the largest producer of fine cotton in the country, employing more than 35,000 people. This industry was also eliminated by the 1930s by the emergence of inexpensive Southern labor.

By this time, however, the city had rediscovered the sea and the bounty of George’s Bank. It became the country’s primary source of flatfish and especially scallops. It now accounts for over half the domestic scallop catch and despite its small tonnage, the high cost of scallops gives the city the highest gross income from seafood of any port in the country.

The city is also developing a tourist industry, primarily on the basis of its history as a whaling center (primarily the New Bedford Whaling National Historical Park and the huge New Bedford Whaling Museum). Its summer festival schedule is also a big tourist draw. Thes annual feast of the Blessed Sacrament alone bringing more than 100,000 people into the city over a single weekend.

We planned our trip into the New Bedford area poorly. On our May 2022 visit we ran into very chilly weather. Worse yet, we were there on a Monday. Apparently Mondays–nor for that matter Tuesdays nor Wednesdays—are good days to visit New Bedford in the spring, or probably winter or fall. Or maybe it was still a hangover from Covid. Other than restaurants and hotels, nothing was open. Neither the whaling historic site nor museum, the glass museum, art galleries nor most of those downtown stores which are not already vacant were open.

Left with few other options, we made our own self-guided walking tour of the city. Passing and learning about sites including:

Seaman’s Chapel was built in 1832 and immortalized in Herman Melville’s Moby Dick and the movie of the same name. Interestingly, the book and movie added an embellishment that was not in the chapel—a pulpit in the shape of a ship’s bow. This was rectified when they added this to the actual chapel in 1961.

Rotch-Jones-Duff House is a 23-room mansion built in 1834 by wealthy whaling merchant William Rotch, Jr. The renovated and decorated home and its surrounding gardens are now operated as a museum on what was then the ultra-fashionable stretch of County Road on and around which are several other restored (although not as museums) whaling-age mansions.

Nathan and Polly Johnson House was owned by an African-American and Wampanoag Indian couple. The house became an important stop on the underground railway. One of their guests was a young, escaped slave who gave himself a freedman’s name of Frederick Bailey. The Johnsons took a particular interest in Bailey, arranged for his education, and prompted him to change his name to Frederick Douglas. The rest, as they say, really is history.

James Arnold Mansion is a lovely Victorian mansion that was built by a couple who created beautiful gardens which they welcomed people to visit. Today it is the home of the New Bedford Museum of Glass. It appropriately commemorates the city’s history as the “Art Glass Headquarters of the Country” during the Victorian era during which New Bedford created a number of popular decorative lines including Rose Amber glass, Crown Milano, Royal Flemish, Burmese, and Lava glass. The museum surveys the history of glass from ancient times to the present day. It displays all vintage of glass from around the world and houses a huge glass research library.

New Bedford Whaling Museum which was closed when we were in town, educates visitors on whales and the impact of whaling in the area.