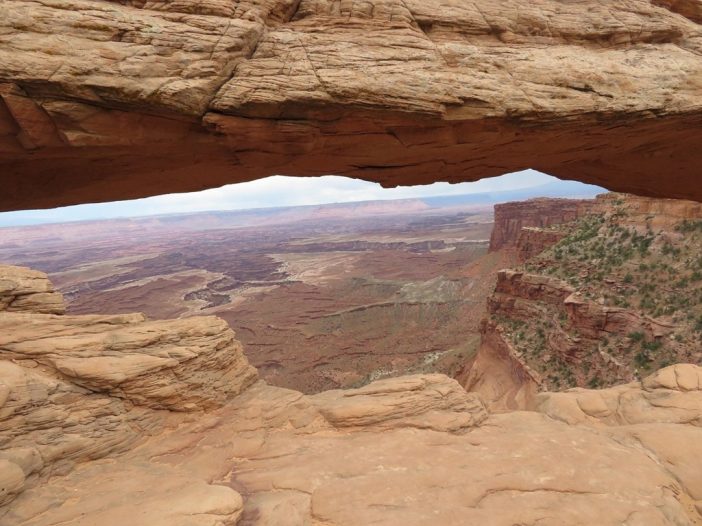 Butts, mesas, red rocks. The Utah monument corner region in southeastern Utah has it all. It s numerous state parks and national monuments in the area are well worth a visit. Come explore with us the ones that we did visit.

Goosenecks State Park provides a viewpoint where you can see an “entrenched meander” similar to Arizona’s Horseshoe Bend. This series of “S”-curves are in the San Juan River that flows about 1,000 feet below.

Natural Bridges National Monument is about 50 miles northwest of the southeast border of Utah. Reaching this area from the south requires a long road of constant switchbacks until you get to the top of the mesa on which the monument is located.

Unlike the arches at Arches National Park which are formed by wind and erosion, the natural bridges are formed by streams that cut through canyon walls. The park highlights three of the largest natural bridges in the world: Siparu, Kachina, and Owachomo (which is no longer over water as the water has been rerouted).

The park also has a small set of cliff dwellings, the so-called Horse collar Ruins. The ruins are unusual in that they contain both circular and square kivas which are associated with distant tribes.

You can view most of the sites from overlooks that require walks of 0.3 to 0.6 miles in each direction, mostly unpaved, undulating, and uneven but without significant changes in elevation. But since you are looking down at the stone bridge, you see only similarly colored stone and trees (rather than sky) beneath the span. This can make them difficult to distinguish from the surrounding rock. When you do see them, they are impressive. While we only did the overlooks for Kachima and Owachomo bridges, we did take the steep (500 foot), 1.2-mile roundtrip down to Sipapu Bridge which was well worth the effort. The ruins, however, can be viewed only from the viewpoint from where they are virtually impossible to discern without binoculars.

Bears Ears National Monument is so named because its twin peaks look like the ears of a bear. The area’s amazing viewpoints overlook sandstone canyons, mesas, and forested buttes.

Newspaper Rock is an amazing site located at the entrance of the Needles section of Canyonlands National Park. The highlight is a 200 square foot wall of primarily Ancestral Puebloan (aka Anasazi) and Ute petroglyphs that have been chiseled and pecked into the stone over a period of more than 2,000 years. Everything from animals to stylized people with horns or antlers and various circular designs. Amazing definition and clarity considering the age of many of these glyphs.

The large (more than 500 square miles) Canyonlands Park is divided into three separate districts, each area is divided by the merging of the Colorado and Green Rivers. We visited the two most popular and most easily accessible districts—Needles and Island in the Sky (skipping The Maze which is a more remote third district).

The Needles District is characterized by deserts, deep canyons, and a large meadow broken up by dozens of red sandstone canyons, spires, and mushroom-shaped rocks. Layers of sedimentary rock (especially sandstone) and igneous rock (from magma that rose and hardened beneath multiple sedimentary layers) originally were formed under the sea. Different features like spires, mushrooms, and arches formed. The Colorado River’s large water volume (which ranges from 1,000 to 100,000 cubic feet) carved deep canyons here.

The park’s sites unfold at a river and canyon view at the Green River Overlook at three interpretive, bare rock walks that range from about .5 to 3 miles, each highlighting different aspects of the park’s geology one that focused on its human history.

This 3-mile trail has a number of lovely canton views and rock formations that contrast from the distant igneous mountains from the multi-layered sedimentary rock (from the red and white colors of the sandstone to the gray and purple of limestone). The foliage here grows in incredibly thin soil and with only about 9 inches of rain per year—usually in a few torrential downpours. The various type of formations were created in different ways. For example, the pothole point trail explained how while the potholes look like dry dirt and perhaps some green, communities of cyanobacteria, mosses, algae, lichens and fungi grow in their biological soil crusts. Within these potholes, shrimp and toad eggs can endure months of bone dry conditions. They only regenerate and hatch within hours after a storm. And vegetation can take root in little little erosion cracks in the potholes.

This trail is generally historical. It explains how people have gravitated to alcoves that have little springs flowing through the rocks for the last 6,000 years and the remnants they left behind. These remnants include a still sparsely furnished cowboy camp that was used as late as the first quarter of the 20th century. It also has great examples of mushroom-like formations that are created as softer under layers of rock erode beneath a slower-eroding hard rock cap.

Although located about 30 driving miles from and 1,600 feet above the actual district, the overlook provides a 360-degree view over the vast landscape of mesas, buttes, and canyons.

Island in the Sky

Island in the Sky is the high mesa on which the park is located. Most of the views are down this mesa to a plateau that is roughly 1,000 feet below the 6,000-foot mesa and down to the Colorado River which has carved meandering canyons about another 1,000 feet below the plateau. Needless to say, this results in incredible panoramic views throughout this district of the park. We stopped at most of the viewpoints and took most of the shorter (two miles or less) hikes. Among the more interesting are:

The origin of this two-mile-wide, several hundred-foot dome is unknown. One theory is that it is a rebound of a collapsed salt dome. Another theory that has gained more recent credence that allowed scientists to explore the fracture patterns to the rock below the dome is that is from the impact of a large meteor. The overlook and the views from the 1.8-mile hike along the rim of the mesa yield phenomenal views of the plateau and the network of river-driven canyons that run through the plateau.

This butte requires a steep ascent and roughly a 1-mile scramble across bare rock to a tree-covered knob and/or allows you to cross over to climb a couple of additional bare rock domes.

This south-facing overlooking provides a view to the canyons and river about 2,000 feet below.

Grand View Point and the 2-mile trail along the mesa’s edge provide spectacular panoramic views. At 6,200 feet above sea level, one can see across the huge plateau about 1,200 feet below. It overlooks the deep canyons and reaches the horizon dominated by the snow-capped La Sal Mountains which, unlike most of the surrounding region, are igneous, rather than the sedimentary rock.

A short, 0.5 mile hike leads to one of the park’s few arches. This large, dramatic arch at the edge of a cliff provides a stunning view and an opportunity to take a scenic, albeit dangerous walk across it.

We started our exploration of the Utah Monument Corner region from Monticello Utah. The area does not have a lot of options for lodging or food but, as usual, we tried to find the best options.

We stayed at the Inn at the Canyons. The outside of the building and the paint and carpet etc have been updated. But parts of the room show its age. We had to turn off the AC because it was so loud and cycled every 3 minutes and disturbed our sleep. The bed was OK but the plugs by one side of the bed did not work. An additional plug on the top of the light over the bed did allow a plugin. The breakfast was very basic but it was adequate. They had a machine that made pancakes, also waffle maker, a couple of sugared cereals, bran flakes, hard boiled egg and some breads. Soundproofing was poor as you could heard doors slaming, hallway noise and the murmur of the conversations from the rooms next to you. The wifi slowed to a craw during prime times. But you don’t have a lot of choices in the area.

Our dinner was about a mile from the hotel at Ja-Roen Thai Sushi, a take-out oriented restaurant which also has minimal table service. While we began on a down note with very tough chicken satay, things got significantly better with the tempura shrimp and even better with the shrimp pad thai. And since it was near a church, it only could serve non-alcoholic beverages.

While our stay in Monticello was okay, we aren’t likely to rush back to Monticello UT.