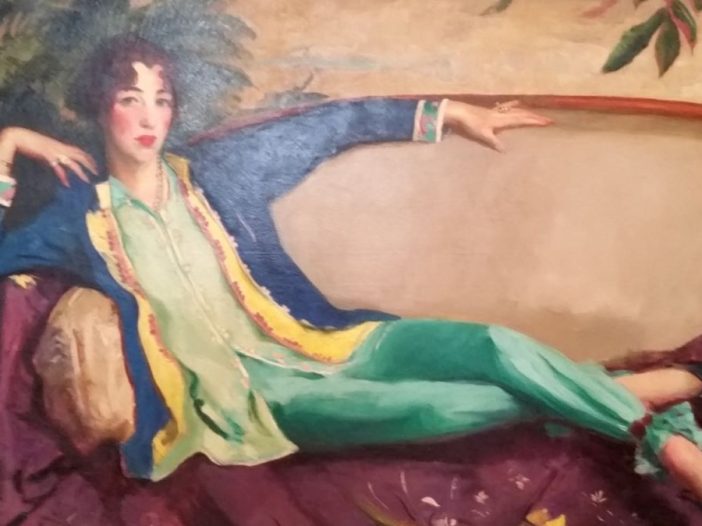 The Whitney Museum of American Art was founded in 1930 by Gertrude Vanderbilt Whitney. In 2015, it moved to its current beautiful building in New York City meatpacking district. We were lucky enough to get tickets on the opening day. Since then, we try to stop by every time we are in town to see its permanent and special exhibits. This blog combines multiple visits to the museum, the latest being in 2022.

The Whitney has close to 30,000 works in its large permanent collection of 20th and 21st-century contemporary American art. Its collection focuses on living artists. While it rotates its permanent collection exhibition, we often see a compilation of works from virtually all major genres since the beginning of the 20th century. These included works from George Bellows, Georgia O’Keefe, Edward Hopper, Man Ray, Franz Kline, Willem de Kooning, Claus Oldenburg, Ray Lichtenstein, Louise Nevelson, Alexander Calder, Cindy Sherman, and a series of Jacob Lawrence’s poignant WWII remembrances.

The top floor has a large Alexander Calder exhibition with representative examples of all the types of fun mobiles, stabiles, and wall-mounted sculptures with which most of us are familiar, plus a few pieces that we would have never recognized as being from Calder.

2022: At the Dawn of a New Age: Early 20th Century American Modernism

Art, like industry, was about experimentation during the early part of the 20th century. Much of this experimentation, beginning in the teens, but especially in the 30s’ came in the form of abstraction. Some, such as William Zorach, Albert Bloch and Pamela Smith (as with her haunting, The Wave), abstracted figurative images.

Increasingly, a number of artists minimized or even shunned figuration in favor of geometric-inspired patterns like those of Manierto Dawson, and especially of using colors and forms to represent emotions and ideas that could not be adequately expressed in words.

Meanwhile, pioneers including, Arthur Dove, Marsden Hartley, and Georiga O’Keefe in New York and Chiura Obata (with his images inspired by Yosemite) and Yun Gee (both from San Francisco) all helped pioneer the use of pure color and form to express emotions.

While it begins with early to mid-century realist paintings, such as George Bellow’s classic representations of the Dempsey-Firpo fight and Thomas Hart Benton’s portrayal of evangelical religion, and Robert Henri’s lounging portrait of the artist and Whitney Founder, Gertrude Vanderbilt Whitney.

The turn of the 20th century, however, was a time of progress and national optimism. It was an era in which the country was rapidly transforming from an agricultural to an industrial economy. Public schools were being developed and in which more and more children were receiving secondary education. Artists including Charles Demuth, Elsie Driggs, and Charles Schooler celebrated this progress and the industry that made it possible, producing art that glorified factories such as Ford’s huge River Rouge Plant and indicia of modernity, such as in Joseph Stella’s soaring representation of the Brooklyn Bridge. Florine Steltheimer’s 1918 New York/Liberty, meanwhile, ushers in a highly geometric form of realism. George Ault on the other hand portrays a “mood” in works such as in his desolate image of Hudson Street—a lonely and isolated mood that Edward Hopper refines and dare one say, perfects in several of his works through the mid-century.

At the other end of the spectrum is Alexander Calder, whose playful, joyous works anchor both corners of the exhibit. First with a diorama of his circus big top and a display of some of the twisted wire performers and animals that he created near the beginning of his long career. And above the display, an old movie of one of the circus performances that Calder staged with these characters, where he staged processions by pulling complex wheeled devices that provided the energy for people on the vehicles to move, staged trapeze performances, lion tamers, and others. Then, at the other end of the floor, examples of some of his playful, late-stage stabiles and mobiles.

In between, a gallery-by-gallery progression through early-to-mid/late-20th century abstraction, progressing from Dove, O’Keefe, Marin, et al, through selected works of mid-century Abstract Expressions including Kline, Krasner, de Kooning, Ed Clark, and others, to Pop (Warhol, Ruscha, Oldenburg, Nevelson and so on).

This 80th, normally bi-annual event (disrupted during the pandemic) includes works by 75 selected American artists. Since we didn’t have time to focus on all, we began a guided tour to get an introduction and high-level overview of the exhibition before independently surveying the works on each floor and focusing on those in which we had the greatest interest. While some of the art was self-explanatory, most required a depth of interpretation that the interpretive panels (which focused primarily on the background of the artist and the materials used) did not provide and that we were incapable of inferring. We, therefore, focused on a relative handful to which we were most attracted and that appeared to be most interesting.

The works were largely a product of their time. Many portrayed the disruption, isolation, and uncertainty associated with the pandemic, the Black Lives Matter Movement, the shock of the George Floyd murder, and police violence, and the uncertain fate of the union in the face of social and political polarization. Although some provided very explicit messages, others did so obliquely or not at all. Some were figurative and quite literal; others were highly abstract and subject to varied interpretations.

The first thing one notices is that the first floor of the exhibit is dark and confined. The other floor is light, airy, and open. Some, but by no means all the works on these floors corresponded to their spaces.  The entry of each floor is marked by large, multi-panel works. Two panels of a dense, confining, cross-hatched architectural design triptych that marks the entrance to the dark, confined floor, and two Ellen Gallagher (Draught of Fishes) panels (again of a tryptic) with bright palladium elements as an entry to the open floor.

Among other works that we found to be of greatest interest were:

In 2021, The Whitney had a Jasper Johns Retrospective special exhibit, which occupied the entire first floor. The exhibit was only one-half of a large-scale retrospective on the art of Jasper Johns. The other half was in the Philadelphia Museum of Art. The huge exhibition provides highlights of a 70-year career (and counting) and its many themes and transitions.

Johns arrived in New York from his native South Carolina in the late 1950s. He quickly became embedded in a society of free-thinking, gay artists including Robert Rauschenberg (with whom he became both artistically and romantically involved), and composer John Cage and dancer Merce Cunningham (both of whom he collaborated artistically).

By the early 1960s, he destroyed most of his previous work vowing to develop his own style and remain independent of other artistic norms. While most avant-garde artists at that time were exploring inner emotions and perceptions, Johns began producing cool, impersonal representations of familiar objects (such as letters, numbers, targets, and the American flag) with his own interpretations often in black, white, and shades of gray. For example, he painted the flag right-side-up and upside down and a target with a row of sculpted human faces above which could be covered up (seemingly suggesting that we could people by stripping them of their individuality and viewing them as targets.

His work included representations of beer cans and other everyday objects in a day in which his Abstract Expressionist contemporaries were representing concepts and feelings in abstract forms. He was credited with helping give rise to new genres of art such as Pop, Minimalism, and Conceptualism. During this time he also began transposing images and experimenting with mirroring or doubling images, such as by producing two or more identical or minimally different ways (techniques he would employ throughout his career).

In the early 60s, Rauschenberg broke up with him and another of his gay friends killed himself after being violently rejected by someone he had propositioned. John’s work turned dark, both figuratively and literally in his use of darker palates. He later returned to his earlier subjects, adding another familiar image to his repertoire—the map of America and began expanding his palate to include many more colors. But once again he did it in his own way.

His 1964 large, important, transitional work, According to What was a multimedia work that incorporated multiple subjects and references. He also expanded more into doubled paintings, revisited a number of earlier themes, and returned part-time to South Carolina which seemed to open a nostalgic vein. He started painting people he had known and even incorporating the floorplan of the house in which he grew up in one of his pieces.

In 1982, he introduced another signature series of Saveran Monotypes (images of coffee cans in which he placed his brushes). He made modifications to the printing of images or the orientation of the image and used double or mirrored images on a single print.

His 1983 Thoughts incorporated a number of historical references and his 1986 Seasons series represented stages of his life. He made selective returns to his earlier grayscale pieces and his 1979 Dancers on a Plane marked a return to his crosshatches. The 80s and 90s also saw a number of pieces that represented fragmented and distorted body parts and the introduction of a mysterious shadow person into a number of his works.

By the 2000s he was using many more symbolic associations by:

In 2020 (the first year of Covid-19) he started looking at health, mortality, and our/his role in the universe with his painting that incorporates a detailed medical drawing into a work that appears to depict the stars.

In the last two decades, he also returned to sculptures. For example, he created new representations of Ballantine beer cans that were the subject of some of his early drawings with one that had been opened (and presumably drunken) and another unopened.

The last gallery in the exhibit was dedicated to a recent series of small scale-wax sculptures that reprised his periodic focus on numerals— apparently by cutting wax models that were used in a previous large-scale work into smaller blocks in different metallic colors.

Another special exhibit mostly pulled together pieces from Whitney’s permanent collection to examine how artists were merging traditional crafts materials (such as pottery, wood, wire, fiber, quilting, and even beads) into fine arts pieces that are intended for display rather than functional use. And how these materials are being used in works that are intended to deliver messages around themes including, identity, color, sexual orientation, racism, pop culture, and many more.

Although the exhibit included a number of beautiful and powerful works, we—not to speak of everybody else in the gallery—were enthralled by Liza Lou’s incredible, full-size sculpture Kitchen. She created a detailed representation of a roughly 1950/60s-era kitchen where every surface is covered with beads. The work took five years to complete. It includes details such as cereal boxes, dish detergent bottles, dirty dishes piled in the sinks, and a pie ready to come out of the oven. It is meant to indicate an extravagant slice of life and an indictment of the sexism that suggests that women still must shoulder an inordinate burden of housework and that such work is supposed to be pleasurable.

While the Whitney and dozens of other museums are filled with abstract works of art, they overwhelmingly represent the work of men.  Although a few women such as Lee Krasner and Louise Nevelson have broken through to become widely recognized, they are few and far between. This small exhibition provides notable examples of works by a handful of women who deserved greater recognition and commercial acceptance.