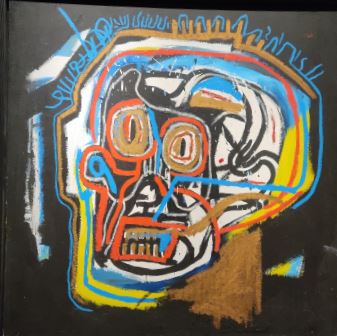 It shows his evolution from an underground street artist to one who enjoyed international acclaim–acclaim that was more in Europe and Asia than in his native America during his lifetime and for several years after his untimely death.

Jean-Michel Basquiat was born in December 1960 to a Haitian father and Puerto Rican mother. Videos with his sisters, friends, agents, and others who knew him talked about his relatively happy childhood. He was a curious, playful child who had a rich fantasy life and, as displayed with examples, was the illustrator of his school newspaper. Early on he was aware of racism. The exhibit told of a particular childhood episode where he and his sisters were in a predominantly white neighborhood. He persuaded his sisters to join him in chanting and yelling ”I’m black and I’m proud” over and over until an adult persuaded him to stop.

The family life is portrayed through displays of documents, childhood drawings and sketchbooks, photos, home videos, and even recreations of his family’s home living room and dining room.

While the exhibit portrays work on paper, wood, fabric, and canvas from across his career, it focuses largely on 1982 to 1984 which was characterized as the period during which he did his best work. This period coincided with the time when he had his own studio (which is also displayed, including examples of new and partially done works and videos of him painting) and had his first shows in New York, Los Angeles, and Germany. The exhibit also includes all manner of his personal effects, including sketchbooks and all types of personal effects—from toys to African art.

The exhibition was engulfed in music—especially rock and jazz—that served as an inspiration for his work. The exhibition displayed but did not specifically try to explain his evolving style or the meanings of his works. But it did reveal that his frequent use of crowns related to his view of the important roles played by African Kings and Queens and by his conviction of his own importance to the art world.

A number of his paintings revealed some of his own personal black heroes including sports figures and musicians and his particular reverence for jazz-great Charlie Parker.

It also explained his view of police harassment and violence against blacks and especially the role of black policemen.

The exhibit ended with Basquiat’s infatuation with the club scene and how it energized him. The final gallery of the show with had two large murals that he designed for one of his favorite nightclubs, the Palladium.

Although the exhibition provided a great opportunity to see a number of the artist’s works that are not generally available for viewing, we would have appreciated more discussion of the evolution and the meanings of the art. Moreover, it clearly sanitized his life. He was portrayed in an image that the family undoubtedly wants to perpetuate, rather than an objective assessment. Even with this, it was, at least for us, well worth the cost and the time.