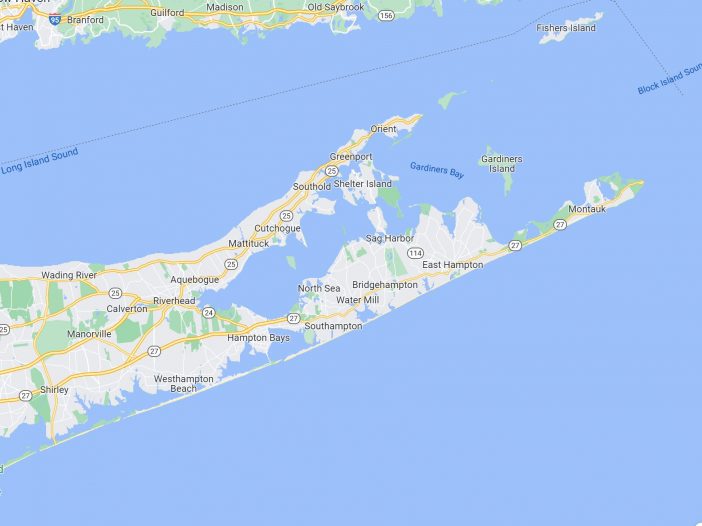 Southampton and East Hampton collectively compose “The Hamptons”, which are located on Long Island’s South Fork. Unlike the North Fork, the cooler temperatures and less hospitable soils stemmed the South Fork’s development as a major agricultural center. Instead, its beeches, combined with its cooler summer temperatures drew tourists—especially those looking to escape the stifling New York City summers.

Upscale tourists began buying several smaller parcels of land to build huge, multi-million dollar estates. The 1870 launch of train service from NYC to Southampton accelerated this trend as did the mid-20th century expansion of highways that allowed travel between New York and the Hamptons in as little as 90 minutes.  Today it is known as an expensive, albeit lovely, area. We recently visited the area to gawk at the “homes” that are way beyond our means.

East Hampton became one of the first English settlements in what is now New York State in 1648. It thrived as a whaling center and potato farm in the 19th century. By the 20th century, it had become a second (or third, fourth, and fifth) home for the rich and famous of New York, and by the mid-century, Hollywood and Washington. We snuck peaks at a few of these mansions through the ubiquitous 10-foot hedges on streets including Gin and Meadow Lanes. Less unobstructed views of the backs of the mansions can generally be had from the public beaches. We also strolled the town’s primary commercial streets of Main Street and Newton Lane filled with boutiques (primarily women’s clothing), galleries (most of which had not yet opened as of mid-May), and real estate offices. And if you have an extra $35 million sitting around, you might want to scope up the lovely looking 11,000 sq. ft., 9 bedrooms, 11 bathrooms which was being advertised during our visit. Tempting…..

East Hampton is particularly impressive for its preservation and restoration of many of its historic buildings. Like many South Fork towns, it has preserved some of its windmills. The town also bought, preserved, restored, and furnished a number of historic homes, and commercial and public buildings. These include the Beecher/Hand 1680 Mulford Farm (a colonial-era saltbox home that is on the National Register of Historic Places, the early 18th century Gustav Buek home, which is beautifully furnished in 19th-century antiques, the circa 1717 Town Church, multiple 17th and 18th-century windmills and the 1784 Clinton Academy, a co-ed academy built with community contributions that was the first such academy chartered by the State’s Board of Regents (and hosted an art display when we visited).

Southampton was first settled in 1640 by the English. Its beaches, scenery, and train service made it the first South Fork town to attract large numbers of summer visitors and vacationers. These people increasingly built their own homes and huge estates (did we say huge?), such as those between the beach and Gin and Meadow Lanes. Its primary retail streets of Main Street and Jobs Lane are now lined with expensive specialty shops (especially women’s clothes and accessories), art galleries, and restaurants. Unfortunately, its two primary art centers, the Phillips Southampton Gallery and the Southampton Art Center were closed when we visited, although we were still able to stroll through the Art Center’s small sculpture garden.

Sagaponack is a village in the east end of Southhampton. It is the most expensive town in the area, with the average home in 2022 reportedly priced at $7.5 million. You can see a number of these places from the beaches or from the streets including Sag Main Beach Crestview Lane and Sandune Court.

Sag Harbor is protected from the sea by its position between the two Forks. It is Long Island’s largest, most strategic port and is one of the first two official ports of entry into the country. Its sheltered port and easy access to the North Atlantic then established it one of the largest of the country’s whaling ports. This resulted in a historic district of homes ranging from basic saltboxes to elaborate captain and ship owners’ houses. The harbor, which is now the site of the town’s 1760-era windmill, is still active and still hosts large, ocean-going ships. But now, the ships are huge yachts.

Montauk is the easternmost town in New York State. In the late 1920s, the developer of Miami Beach purchased most of the land here and planned to create the Miami Beach of the north. Although he was able to start his planned development, the 1929 stock market crash stopped the completion of his plans. The town was moved 3 miles south after a 1938 hurricane turned the area into an island. In the 1960s, Montauk’s beaches became an increasingly popular tourist destination. Montauk today remains a popular tourist destination and is home to the largest commercial and recreational fishing fleet in New York State.

We drove through other towns in the area but did not stop to explore them. If you have the time, you may want to check out Watermill, Bridgehampton, Wainscott, and Amagansett.

While we were only able to peek at the exterior of the Hampton’s summer cottages, we remembered that Long Island’s North Fork also had some interesting remnants of the previous gilded age. And unlike the Hamptons’ private homes, you can tour some of them.

While driving along the coast through towns including Huntington, East Norwich, Oyster Bay, and Rosyln on a previous trip, we saw a number of grand homes from the early 1900s. We stopped at only two:

While both of these are certainly worthwhile stops, they are just two of the more than 25 North Shore historic sites, including about a dozen mansions that are open to the public.