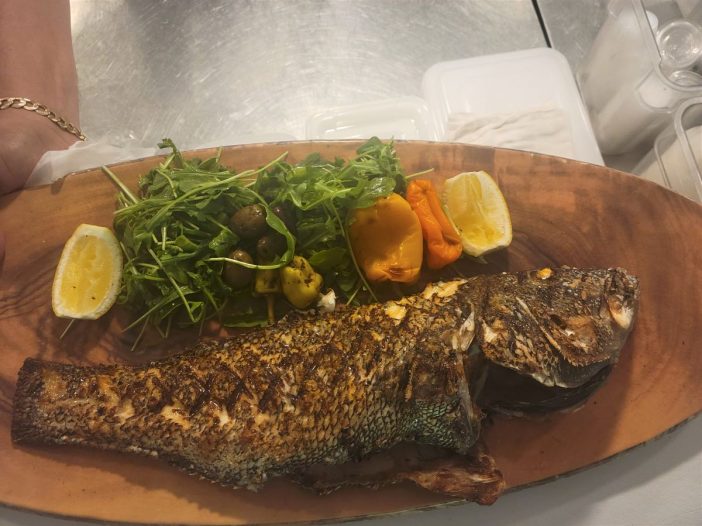 We don’t claim to have in-depth knowledge of the best Long Island restaurants as we’ve only been there a few times and each time were only there for a few days. But we always try to research and seek out the best places to eat. Here is what we found.

Calissa Hamptons (Watermill) is a Greek restaurant that had a wonderful selection of Greek wines and simply prepared (olive oil salt and lemon), super-fresh seafood. We had a delicious meal beginning with saganaki which was not quite as warm as we would have preferred, with a nice crisp crust and a delicious blend of local honey, sesame, and fig jam, followed by a huge, two-pound black seabass freshly caught off Montauk. Since this was far more than we could eat, we were forced to pass on a number of other intriguing dishes. However, we did take advantage of the restaurant’s impressive (albeit somewhat expensive) collection of Greek wines—including several dozen Santorini Assyrtikos and chose a crisp, full-flavored 2019 Tselepos Canava Chrissou Old Vine. It was a wonderful if somewhat expensive meal.

75 Main (Southampton). Our dinner began with littlenecks steamed in Pinot Gris with calabrese salami, tomatoes, garlic, and cilantro. We then moved on to two moderately tasty entrees. The grilled swordfish was quite nice but somewhat diminished by BBQ sauce and cam with corn on the cob and roasted fingerling potatoes. The second entre was a disappointing rigatoni Bolognese with chianti, braised veal, beef, tomatoes, and parmesan. We chose a bottle of 2018 14 Hands Merlot which we recently tasted at the Yakima Valley winery.

The Plaza Café (Southampton). We split two very good dishes and had one of the most helpful servers we have ever run across. We began with tuna poke “nachos”. The raw cubes of ahi had mango salsa, mashed wasabi-avocado, and Asian crema over a bed of wonton chips. The sautéed local golden tilefish with chorizo, local littlenecks, fingerlings, and roast-garlic clam broth was just as good. Our server, meanwhile, was instrumental in helping us select a bottle of 2019 Macari “Katherine’s Field Sauvignon Blanc.

American Hotel Restaurant (Sag Harbor). We shared a lunch of a lobster BLT sandwich that was piled high with lobster and a generous portion of bacon with tarragon aioli accompanied by cole slaw and potato salad. As we were there during soft shell crab season, we then ordered the special of two large, sautéed softshell crabs with capers, vegetables, mashed potatoes, and cherry tomato coulis. We enjoyed both dishes while people-watching from our sidewalk-side table on the restaurant’s front porch.

The Seafood Shop (East Hampton). In yet another example of the potential hazards of shoulder season travel, we were looking for one final lobster roll before leaving the Hamptons. While we found many places that normally offered lobster rolls, every place we found between Southampton and East Hampton was closed (on a mid-May Wednesday). Our relentless quest final paid off at East Hampton’s inelegantly, but descriptively-named Seafood Shop which offers a very large selection of fresh, very nice-looking seafood. It also offers a relatively small menu of prepared dishes that can be eaten at outside picnic tables. Our need for a final roll was nicely quenched by a small, but very good lobster salad roll and, to reward ourselves for success in tracking and catching our elusive prey, we added a pound of huge, meaty steamers in a very tasty broth.  While it wasn’t a gourmet meal, we were pleased with both dishes.

Claudio’s Waterfront (Greenport). We stopped for an appetizer of steamed clams in an ale broth with jalapeños, butter, garlic, and cream and planned to move on to another place for our ain course. But the bar was so lovely, the bartender so engaging and the clams and broth so good, that we filled up on a second order.

We were unable to visit a number of other highly recommended restaurants. Among them are The Lobster Roll (Southhampton), Taste of Venice (Cutchogue), Grana Trattoria (Jamesport), Braun’s Seafood (Cutchogue), A Lure Chowder House (Southold), Southold Fish Market (Southold) and The Frisky Oyster (Greenport)