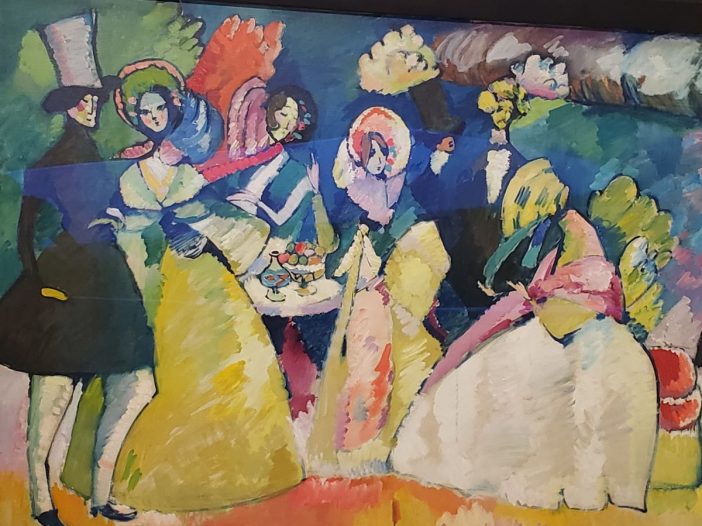 New York City’s Guggenheim Museum is housed in a Frank Lloyd Wright inverted-ziggurat design that is as impressive as the art that it holds. The spiral ramp leading to a skylight has been named as a National Historic Landmark as well as a UNESCO site. While we love the architecture, we also love visiting its exhibitions. In May 2022, the museum was showcasing a Wassily Kandinsky Retrospective as well as a Cindy Sheman-like self-portraiture of Gillian Wearing.

In 1899, the abstractionist pioneer move from Russia to Munich to briefly study art before leaving school to explore plein air painting with his artistic partner Gabriele Munter. And since his family was wealthy, he could pursue his interests largely as he wished.

As with most early abstract painters, much of Kandinsky’s early, Neo-Impressionistic work was figurative, although much of it was displayed with the non-naturally vibrant coloration of the Fauves. He then moved to Art Nouveaux style. Soon after he experimented with portraying traditional Russian costumes as wood prints, which temporarily became his primary media.

By 2010 he had begun to lean toward Expressionism and away from strict figuration to imagery, especially of horses and riders as symbols for symbols of hope for spiritual evolution. His theoretical leadership in this area led him to become a leader of the German Blue Rider movement composed of similar thinking artists and musicians.

By the 1910s he moved increasingly toward more abstract images. He used less naturalistic brilliant colors, more delineated forms, flatter perspectives, and in some works, white borders to express what he referred to as the “harmony of silence”. He worked increasingly in watercolors, his images became more encoded and his style more and more abstract—albeit with clear allusions to land, water, and sky. By the end of his career in the later 20s and 30s, his work, as seems to be the case with many artists became increasingly philosophical and spiritual.

Gillian Wearing developed her career largely around masks—particularly those that she herself wore. This is particularly true in her family album series in which she creates and wears masks and clothes and assumes poses to resemble family members in photographs and videos.

By the 2010s, about a decade into her career, she began adapting the personas of and showing herself with artists she admired. A separate part of the exhibit shows several styles of her more recent works including the creation of sculptures of everyday heroes, pictures of people exposing their hopes, and videos of disguised people confessing some of their deepest secrets.