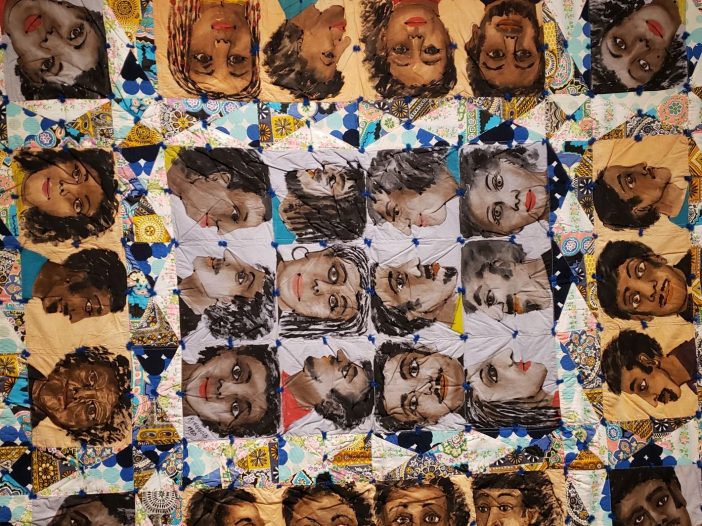 New York City’s New Museum of Contemporary Art is not a museum that has a collection of art. Instead, it pulls together exhibitions of contemporary art that it hopes will create a dialog between an artist and the public.

In May 2022, we visited the museum for the first time, primarily to see its Faith Ringgold exhibit. Ringgold has spent a career portraying the complexity of the American experience, especially around racial and gender identity issues, through figurative works that blur the distinction between art and craft. The exhibition includes paintings, fabric-based soft sculptures, and story quilts. It traces her career through a display of more than 100 works from a twenty-year-long project (out of her 50-year career) called the “French Collection”, the series for which she is best known.

The museum introduces visitors to Ringgold and her work with panels that provide an overview of the African-American woman’s challenges of getting her work shown in mid-20th century America and how even African-American male artists would not accept her. While the early works from her so-called American Collection (see below) were oil on stretched canvas panels and other traditional bases, she gradually switched to quilts and soft sculptures made largely of cloth. She packed them into a van and traveled the country to give impromptu exhibitions and performances that discussed American racism and the particular challenges of women.

Her early work starts with her largely oil-on-canvas “Tar Beach Series” where she traces her childhood dreams and aspirations through her seemingly happy childhood. Tar-covered roofs of Harlem apartment buildings served as “beaches”, where children laid and played on the roofs during the day and in which families gathered on the roofs for dinner and to socialize with friends and neighbors in the evening. Many of the works portray her as a child floating above the roofs and the nearby skyline with idyllic dreams of life and her early dreams of the future.

The exhibit transitions to the early, again, primarily oil-on-canvas works of her long, multi-faceted American Collection that portrays the country’s racism and the fear and alienation that it engenders in its victims portraying simplified figures. She expressed this particularly poignantly through a series that begins by portraying some of the subtleties of racism. For example, men are portrayed in pyramidal groupings with white men on top or with white men in front. Or Blacks holding their hands over mouths as if to restrain them from speaking about their situations.

A few large murals portray the 1967’s long, hot summer of racial violence. Subtle representations portray bloody scenes of Whites subjugating and stabbing Blacks. She created smaller works in support of numerous Black and feminist causes: from her revulsion she felt around the Attica massacre to her support of Angela Davis and her lobbying for a Black wing at the Metropolitan Museum. This led her to increasingly embrace and identify with her own African heritage, including with three pictures—one that portrays her as a very pregnant African woman in a loincloth cutting her way through a dense jungle with a machete, followed by one of each of her two similarly daughters, largely hidden in the deep brush.  Her Black Light Series, inspired by early Congolese textile paintings in the 1980s led to her first printed quilts that tell stories, again largely of racism and through a combination of simplified images and text.

Most of the remainder of the exhibition focuses primarily on her quilts and soft, fabric sculptures, many of which highlight the large, generally heroic, but unrecognized roles of Black women in U.S. history—some with subtlety, and many much more explicitly. A number of these American Collection quilts and sculptures, as displayed on the museum’s third floor portrayed the African-American struggle and icons from Dr. Martin Luther King to Aretha Franklin. This was the collection that she took around America, displaying and staging performances around.

The fourth floor, meanwhile, is dedicated to the dozen large-scale quilts for which the exhibition was named. These quilts, portray a number of ground-breaking African-American women of the 19th and early 20th century, from Sojourner Truth and Harriett Tubman to Josephine Baker, as well as a woman called Willa Marie (presumably Ringgold’s alter-ego) in French settings, often with prominent late-19th and early 20th-century French artists. One shows African-American women with or being painted by artists including Picasso, Monet, Van Gogh, and others in their studios or, in the case of Monet, on the grounds of Giverney—often surrounded by representations of other of the artists’ work. One of Matisse, meanwhile, shows a black women artist painting a group portrait of several famous African-American women in a Matisse-like setting, with Matisse standing off to the side, watching.

It was an impressive show of the little-seen works of a pioneering and persevering artist that it many ways, represents the critical, but the largely unrecognized role of the women that Ringgold portrays in her art.

The museum, meanwhile, also has two other, very small displays of two other artists’ work: