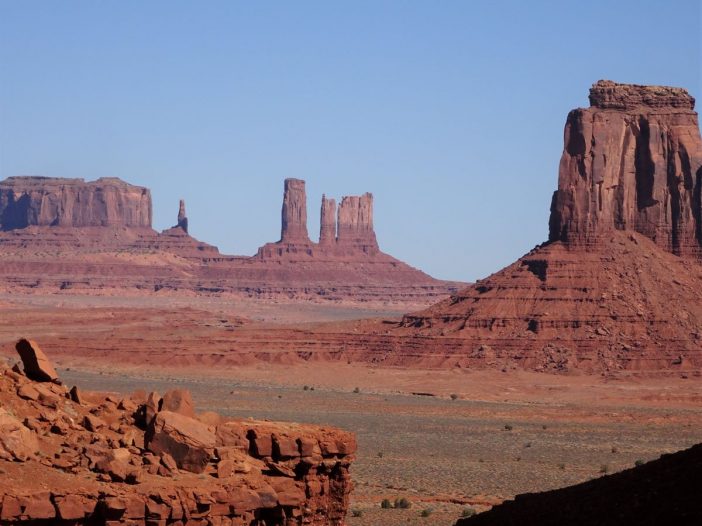 Kayenta Arizona is part of the Navajo Nation. With a population of about 5,000, it doesn’t have much to draw one by itself. But it is a convenient overnight spot for visiting two awesome sites. To the northeast is Monument Valley Navajo, Tribal Park. To the southwest is Navajo National Monument.

Beautiful Monument Valley is approximately 19 miles northeast of Kayenta. The valley spans the northern tip of Arizona and the southern part of Utah. Fifty million years of erosion created dramatically sculpted red sandstone monoliths. The Western movies of the 1950s and ‘60s burned this beauty into the American consciousness. Many monuments are named after the director (John Ford) and his hand-picked star (john Wayne) who made many of the movies. And more recent movies such as Back to the Future II also used the area as a backdrop. The scenery has three primary structures that reflect different levels of erosion:

Mesas. These large, flattop, red sandstone structures tower up to 1,000 feet above the valley floor. Examples include the valley’s Mitchell, Spearhead, and Rain God Mesas.

Buttes. While they are generally shaped similarly to mesas, they are much smaller and have more pronounced features that may have separated from the main structure. East and West Mitten Bluffs, Merrick Butte, and Camel Butte are the most scenic of these.

Spires. Their slender towers may have separated from the edge of mesas or buttes as the softer rock between the adjoined structures. The elegant Three Sisters almost appear to have danced away from its parent, Elephant Butte. Other freestanding spires are all that remain from what had been a mesa or a butte that has long since eroded into sand. Among the most dramatic examples of these are Totem Pole and The Thumb.

Although you can see most of these structures for free from Route 163, pay $20 to enter and drive along the 17-mile dirt loop road. You get much closer to the structures and you can see them from multiple perspectives. The loop provides many opportunities to get out of your car and explore the structures from a respectful distance. But you can only get out to hike in one spot: Wildcat Trail which goes around West Mitten Butte. The loop road also provides a few stops that provide broad panoramic views.

The Navajo National Monument is on the opposite side of Kayenta, about 30 miles southwest.

The Hopi, San Juan Southern Paiute, Zuni, and Navajo tribes once lived, farmed, and hunted in this spring-fed valley. The site preserves their ancestral Navajo cliff homes. Although the dwellings have not been occupied since 1,300 CE, they are supposed to be very well preserved. The only way to get up close to the alcoves in which the dwellings are built is via one 3-5 hour guided hike per day at 6:00 AM.

But fear not. You can also see them via the 1.3-mile round-trip Sandal Trail to the Betatakin Cliff Dwelling overlook. The disadvantage is that they are still a quarter-mile away and are only visible through your personal binoculars or those that are conveniently mounted at the outlook. The area has two other self-guided walks which only provide a nature walk of the valley and a view of the cliffs–not of the dwellings themselves.

Interpretive signs along the path explained the lives of the roughly 125 Ancestral Puebloans (Anasazi) who lived here at the community’s height, speculated that they may have left after only 50 years due to the beginning of another 20-year drought cycles, social pressures, or any of a number of other reasons. They explained the reasons for building in south-facing alcoves (warmed by winter sun and cooled by summer shade), the crops they farmed (primarily corn, beans, and squash), and what they traded for (cotton, turquoise, shells, and feathers) and how some became herders when Spanish missionaries brought horses, sheep, and goats.  Signs also discussed many of the trees and plants the tribes used and the ingenious uses they made of them.

There were also fossils of dinosaur footprints and models of two specialized wood and mud structures that were used: A sweathouse, which is essentially a dry sauna that was used for bathing in a water-stressed environment, and a “Hogan”, a small mud hut that is supported by three sticks that can be easily carried.

We were only here for one night and tried to find the best eating place in the area. Our expectations were limited when we walked into the Reuben Heflen Restaurant and saw its atmosphere and limited menu. But don’t judge a book by its cover. The black bean soup topped with crema, fried pork rinds, and green onions was rich and tasty.  So too was Top of the Mesa, a half-pound burger with cured ham, Maplewood bacon, and cheddar cheese.  While our first one arrived overcooked, the replacement was perfect. The only menu disappointment was that they didn’t have the Navajo sunday that was on the menu. And as it was on Navajo land, there is no alcohol.