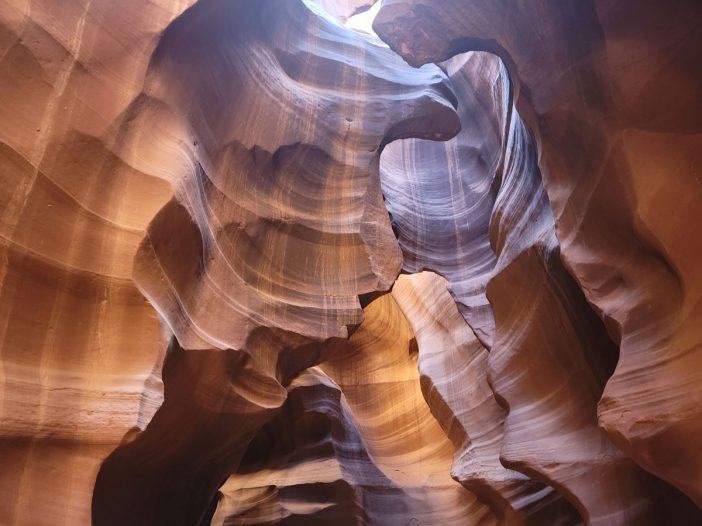 Page Arizona is a 7,000-person city that was originally built to house workers on the Glen Canyon Dam. While one may not think it is a high-priority tourist location, there is more than initially meets the eye.  It is:

A visit to this incredibly picturesque canyon is one of the highlights of this area. The park is actually divided into two separate slot canyons that are connected by a common wash so that water that flows through the Upper Canyon will eventually flow through the Lower Canyon on its way to Lake Powell. (At least that water which does not evaporate on its journey.

After a flash flood killed some hikers, one can only access the canyons by booking a Navajo-led tour (as it is on Navajo land). But first, you have some decisions to make: which or both of the canyons to tour, and when to do so.

Both are slot canyons that consist of the same two layers of sandstone, the older, grayer Kayenta and the younger, pinker Navajo. Both also have the same type of swirl patterns (formed by wind blowing sands across dunes that were later submerged and compressed by the sea before rising with the Colorado plateau), the same dark vertical streaks (caused by water flowing through faults, and the same pattern of uneven erosion (due to soft layers eroding more rapidly than harder layers). Both were also formed by the same water flows that occur only during strong monsoon storms (from mid-June to mid-October). We selected the upper canyon. It has:

After selecting the cave, you must decide on the season and the time of the visit. We chose the tour which would get us into the canyon midday when the light shines directly into the lip and reaches the floor—the only tour of the day that is priced at $120 rather than $100 for each of the others.

At the entrance, Leo, our wonderful guide, pointed out the footholds the Anasazi created to create granaries, and the pick-hole pictographs of the men he suggested probably created the granary.

The cave itself was almost as awesome as the Peter Lick photo (“The Phantom”) from which we first learned of the canyon. The main difference is that we could not discern the subtlety of the colors or view them as crisply as can photographers with tripods and filters. We could still experience the twists and turns carved by the monsoon floods in their search for the path of least resistance, the awesome colors of the light patterns as you move from chamber to chamber, and of course, the effect of the sunlight streaming from the narrow ceiling slits—an effect that Leo accentuated by tossing sand into the air and instructing us to snap photos just as the sand fell to the ground and the dust lingered in the light beam. All the way through, he guided us as to how to take the best shots and volunteered to take pictures with our own phones and cameras. Since it was a cave tour, he also had to point out the formations that looked like bears, eagles, and other animals. He also discussed and was happy to answer questions about the geology, the San Juan Southern Paiute (the so-called Basketweavers”), the Anasazi, and the Navajo who had settled in this area since from more than 1,000 years ago.

Directly above the dam, the visitor center provides not only a close-up view of the dam, the bridge, and the maze of powerlines and towers but also provides a history of everything from the underlying geology, to the communities and lives of the Native Americans and the construction and ongoing management of the dam.

From the bottom of the deepest canyon to the tops of most of the tallest of the region’s non-volcanic mountains, the Colorado plateau was created at or below sea level by tens of millions of years of sedimentation, blowing sand dunes. The lower Kayenta sandstone layer was created about 190 million years ago by undersea sedimentation and pressure while the younger (about 180 million years), higher level of Navajo Sandstone was created primarily by the blowing of sand from dunes. Younger layers include Entrada sandstone (165 million years ago from the inland sea that covered the area) and Gray Shale (about 90 million years ago) from the compaction of mud and sandstone. These layers, the ways they were uplifted about 4,000 feet by subduction of the Pacific Plate beneath the North American plate about 5 million years ago, and the subsequent erosion of the soft rock by millions of years of water and weather account for the regions’ fascinating layering of rocks, the shifting waves of different layers and the unique combination of colors.

The Native Americans who initially settles in this area always struggled with the limited availability of water and periodic droughts. But water issues became much more pressing and controversial when tens of thousands of new ranchers and farmers began to settle in the region in the late 19th century and more land was developed and irrigated. In 1902 the federal government established the Reclamation Service (later the Bureau of Reclamation) to regulate the Colorado River water system as a means of ensuring equitable access. The 1922 Colorado River Compact and a US-Mexican treaty greatly expanded the regulation by allocating water among the states and that which flowed to Mexico.

While the Hoover Dam was instrumental in regulating water flow, controlling floods, storing water for human use, and generating electricity for the Lower Colorado, the Upper Valley needed the same type of services—especially after a new flood of people arrived. After three years of planning and preparation (including the creation of the town of Page to house workers, the digging of diversion tunnels, the installation of electrical lines, and so forth), the 2.5 year construction process began. By most measurements—the amount of concrete, water capacity, electricity generation, etc., Glen Canyon is slightly smaller than Hoover. Both, however, are smaller than the Grand Coulee Dam and all three are dwarfed by the scale of China’s Three Gorges dam.

In 1869, The Powell Expedition was contracted to explore and survey the Green and Colorado Rivers and made the first recorded passage of white men through the Grand Canyon. John Powell, a geology professor, and his ten-man team managed to pilot three wooden boats through dozens of treacherous rapids that could have easily pulverized such fragile craft.

Despite the uncertainty of navigating these unknown rivers without a map, the loss of boats and supplies, several near-drownings, and the abandonment of the mission by several in the crew, all survived. Most of the men, in fact, reveled in the adventure, the warm waters, and the beauty of the canyons. They completed the journey in less than three months and even returned for a second expedition several years later. Powell led this team all with one arm after his right arm was amputated after being shot in the Civil war. Ten years after these expeditions he was named the second Director of the U.S. Geological Survey.

Horseshoe Bend is a section of the river called an entrenched meander.  Like many other rivers, the Colorado meanders and often makes wide bends while seeking the path of least resistance. When the Colorado Plateau uplifted, this section of the river became trapped in its riverbed and was unable to meander outside it. The river eventually cut through the uplifted sandstone and created a 1,000 foot deep gorge in the shape of a horseshoe. One of the most popular of the river’s tourist spots other than the Grand Canyon, it is accessible by a 1.5 mile in-and out path to an overlook.

Lake Powell and Other Natural Attractions

The massive, 186 square mile lake that was formed by the Glen Canyon dam has a capacity of 27 million acre-feet of water (enough to cover the country of Austria with a foot of water). It is the second-largest reservoir in the county after Lake Mead (which was created by the Hoover Dam). In addition to providing water to millions of people, not so speak of animals and crops, it is also the heart of the Glen Canyon National Recreation Area. While it normally provides boating, swimming, and fishing opportunities for tens of thousands of people per year, the severe drought combined with rapidly growing demands on the lake’s water has caused it to fall to its lowest level since 1969.

We saw this in person by driving along Lakeshore Drive and by a stop at the Antelope Point Marina. Lakeshore Drive normally provides a view over miles of water. Yet it was reduced to several connected pools surrounded by wide expanses of dry land. The view from the Marina was even more dramatic—a long dock stretching hundreds of feet from the shore to dry land as far as the eye can see.

A number of areas’ other sights were less impacted by the lack of water. Examples include:

Although Page is not especially known for its restaurants, we did have two relatively good meals.