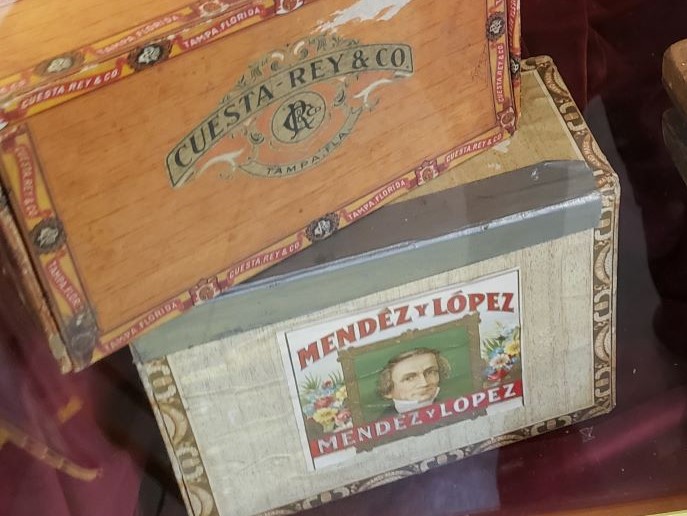 Tampa Florida is one of the main cities surrounding the Tampa Bay on Florida’s west coast. St. Petersburg and Clearwater are the other major cities on the Bay. We typically focus on St. Petersburg, with its Dali Museum, Chihuly Glass Center, and dozens of galleries and studios when we are in the area. On this trip, we decided to explore Tampa.

A Brief History of Tampa

In the 18th and 19th centuries, Tampa Bay was home to Native Americans, pirates, snakes, mosquitos, and little else. As with most of central and southern Florida, the emergence of the railroad in the late 19th century helped to develop the area. It began to take off in the 1890s and early 20th century as a cigar-making center that employed Cuban, Spanish, and Italian settlers and with the emergence of tourism.

Over the last half century it has become a prosperous port, cruise, beach, and tourist center. While the city is now home to many museums and tourist attractions.

The Tampa Riverwalk is a 2.6-mile pedestrian promenade that traces the Hillsborough River around downtown. It is lined by the river on one side and parks, museums, and other attractions on the other. The Public Market at the northern terminus of the walk is filled with food stalls, craft shops, a restaurant, and indoor and outdoor seating. It leads into a large park (with artificial grass) and follows the river past a kayak/paddleboard rental facility, playgrounds, dog parks, a skating rink, museums, a sports arena, water taxi stops, a history center, a growing number of hotels and condos and at the other end, the aquarium. The walk is packed with interpretive signs that discuss the area’s ecology and history. One sign discussed the first scheduled airline flight in January 1914 (21 miles from St. Pete to Tampa) which carried a single passenger (Tampa’s mayor) and mail. Another talks about the role of McGill Air Force Base in aviation and the city’s history.

Henry B. Plant Museum is located just off the Riverwalk. It is a remnant of the birth of modern Tampa. It occupies part of a huge, elaborate, Victorian structure with domes, minarets, cupulas, a wrap-around porch, and gingerbread details. The building was opened in 1891 as the Tampa Bay Hotel,  the region’s first ultra-luxury hotel. Since 1933, the non-museum part of the building has served as the base for the University of Tampa.

Henry Plant played the same type of role on Florida’s West Coast that Henry Flagler played on its East Coast. While Plant and Flagler both built eight, luxury destination hotels along their Florida lines, Plant owned and managed about 2.5 times the amount of track in Florida (not to speak of tracks throughout the southern U.S.). Moreover, while Flager’s fortune came primarily from his partnership with John D. Rockefeller, Plant was a self-made billionaire. He bought dozens of bankrupt southern airlines after the Civil War, standardized their tracks and rolling stock, and connected them to northern railways. For example, a route from New York carried Pullman cars and privately-owned luxury coaches 1,200 miles from New York to Tampa in about 46 hours. And, as the case with Flagler, he build elaborate, destination hotels along the state’s Caribbean coast to attract wealthy Gilded Age tourists.

The 1884 completion of the railroad was instrumental not only in bringing tourists, but also in carrying fresh food (which would spoil on the slow, rough journey over the region’s split-timber, log roads) and, most importantly, in allowing large quantities of goods to be shipped quickly and cheaply over long distances. This made it possible to sell the region’s oranges and fish into other markets and attract other industries to the Tampa area.

Plant, however, was not satisfied with creating a railway. He also created the region’s first deep-water port and created a steamship company to carry passengers and goods between Tampa and Caribbean and Latin American countries. The rail/steamship lines were instrumental not only in attracting wealthy, gilded-age tourists to the city and to the south, but also in building a diversified economy: most importantly by attracting Cuban and Key West cigar companies to build factories in Tampa. (See below for a discussion of Tampa’s Ybor City cigar-manufacturing district.)

This transformed a small, isolated, 720-person fishing and orange-growing village into one of Florida’s largest cities and into a gateway to Latin America and the Caribbean. So, when the U.S. declared war on Spain in 1898, Plant persuaded President McKinley to select Tampa as the headquarters for the U.S.’s Cuba campaign. And, since the Tampa Bay Hotel was the only large, good hotel in the region, it became home to Army officers (including Teddy Roosevelt and the other Rough Rider officers) and the press corps that covered the war.

While the war was a boom for Plant’s railroads, steamship lines, and hotels, his primary goal was to attract wealthy tourists. Plant spared no expense in creating a destination that would attract the rich and famous of the gilded age. The elaborate Victorian structure was the first all-electric hotel. It had more than 500 rooms (which were rented for $5 per night), each with its own fireplace, hot and cold running water, and 11-foot windows that could be opened from the top and the bottom.

The hotel included a huge casino (an entertainment rather than gambling venue) that booked the biggest-name entertainers in the country by night, and whose floor was removed to expose a large indoor swimming pool during the day. Premier chefs from New York’s best restaurants staffed the dining room. The common areas and rooms had oriental carpets and contained expensive, elaborate European and Asian furniture, accessories, and art.

And since railroad developers received free land for each mile of rail built, Plant had plenty of land (a total of almost one million acres) upon which to build large ornate gardens (planted with exotic tropical plants and roamed freely by peacocks), 18-hole golf courses, and hunting preserves around his luxury hotels.

The hotel did well in its initial years, especially during the Spanish-American War. It rewarded not only Plant but also his workers, who were paid well and cared for by the Plant System Relief and Hospital Department. Its fortunes, however, had slumped with a decline in tourism at the end of the century and the hotel began to fall into disrepair. The 1926 collapse of the Florida land boom and especially the Depression marked its death knell.

However, the hotel had become a city landmark and the city bought it for a small fraction of the cost to build it. It leased most of the building and land to the University of Tampa and the remainder to a foundation. Both have restored the structure and a number of its rooms. The foundation recovered and restored some of the furniture, furnishing, and artwork which now grace its restored hallway and guestrooms. For better or worse, the rooms have been extensively decorated with period Christmas decorations (as we were there during the holiday season) which makes it somewhat difficult to picture how they normally appear.

Still, it was a nice glimpse into how the wealthy traveled in past times.

This nicely renovated, historic cigar-making community northeast of downtown is now the hub of the city’s thriving nightlife and music scene. It is easy to get to on the streetcar. The Ybor City Museum State Park is a good starting point with its exhibits about the influence of Cuba on Tampa and about the founding of Ybor City. It is located in an old bakery that still has the original ovens that the bakery used. The Centro Ybor Museum also provides a nice overview of the area’s history.

Ybor City was founded in 1886 when Cuban cigar manufacturer Vincente Martinez Ybor recognized that the recently completed railroad would allow him to ship fresh cigars from Tampa to the prosperous, industrialized northern states.

He established the first and largest of the city’s cigar factories in a building that is now the headquarters of the Church of Scientology. Dozens of other large and small cigar factories followed in his footsteps. Haya cigars became the first company to produce cigars using the treasured “Havana clear” tobacco (light-colored leaves that produce the mildest, tastiest, and most treasured cigars). By 1919, the area produced more than 1 million cigars per year and was the “Cigar Capital of the World”. It attracted Cuban, Sicilian, Spanish, and increasingly other immigrants to the area such as by offering them:

The factories also encouraged the formation of health clubs, which offered comprehensive health care for low weekly fees as well as the formation of social clubs to foster more camaraderie. And, to connect immigrants to their roots, they urged other immigrants to establish stores that carried ethnic foods and products as well as restaurants and bars that offered traditional entertainment.

The cigar industry grew so rapidly that by 1909, cigars accounted for 80 percent of all U.S. advertising expenditures and accounted for 30 percent of the state’s total manufacturing value. The industry, however, began to decline with the introduction of cigarettes around WWI and large-scale production had all but disappeared by WWII.

While the neighborhood fell into disrepair and buildings were demolished from the 1940s through the 1960s, it began to slowly recover. Historic buildings were renovated and repurposed and Ybor City was designated a National Historic Landmark District. The population has recovered, homes were repurchased and renovated, many of the social clubs and krewes (such as El Centro Espanol and L’Unione Italiana) have been rejuvenated, and dozens of small, family-owned cigar factories have been reestablished. The refurbished Seventh Avenue, in particular, has been transformed into Tampa’s primary entertainment district. It is populated by bars, inexpensive restaurants, and tattoo parlors that draw huge crowds (especially on weekends) and remain open till 3:00 AM. Dozens of bars (such as Gaspar’s Grotto, which reprises Tampa’s past with furnishings that recall the days of Jose Gaspar, the region’s most notorious pirate from the late 18th and early 19th century) and indoor and outdoor cigar bars (especially the ever-popular King Corona Cigar Company) draw huge weekend night crowds.

Check Out These Additional Tampa Stops

Additional Tampa sites and stops include:

After failing in our two-month-long effort to get reservations at the city’s famed Bern’s Steakhouse, we ended up at: