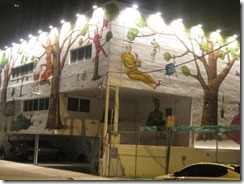 The contemporary Miami art scene is expanding. This is particularly true in the Design District, which has galleries interspersed among, and in some cases integrated into furniture and home furnishing showrooms, fashion boutiques, and restaurants. Then there is Wynwood.

The Changing Face of Wynwood

Wynwood is a former warehouse district in Miami that was generally reborn out of a shell of low-end shoe stores and auto body shops. Real estate developer Tony Goldman, the same man who also pioneered urban revitalization projects such as Miami Beach’s South Beach and New York City’s SoHo, spurred the neighborhood’s turnaround. He opened the area’s first full-service restaurant called Joey’s. He also created Wynwood Walls in 2009, a series of courtyards for which he commissioned some of the country’s leading graffiti artists to create murals.

We first visited Wynwood in 2012. At that time, it was filled with dozens of galleries that showed work from undiscovered and less publicized artists and those who were working in new styles and media.

We also found crafts stores, some very unusual stores (such as a popup Asif Farooq’s “gun store” which sold cardboard representations of all types of guns), restaurants, bars, and coffee houses all of which attracted visitors. Building owners across the neighborhood commissioned other graffiti artists to create murals for their own buildings.

The entire area—the walls, the restaurants and the galleries—had develop into one of the most unique and vibrant communities in the country.

On our 2022 return visit we wanted to revisit the pioneering Walls and to see how the rapidly evolving neighborhood has changed. And has it changed. We could barely find a wall, a construction barrier, sidewalk, or telephone pole that wasn’t emblazoned with street work. And we are not talking of normal tagging! Today these are signed, professional-style graphics that are commissioned by property owners, a neighborhood association, or the city.

Wynwood and neighboring communities such as Midtown, are seeing new retail, office, and residential construction. Several of these buildings have either commissioned art or have incorporated artistic elements into the building’s design.

Meanwhile, the studios and small galleries that began to appear somewhere around 2015, had been priced out of the market by hundreds of restaurants and boutiques that now lines the streets. Gentrification accelerated: for better or worse!

One can see a great deal of the continually changing Wynwood Walls from the street. But getting up close and fully exploring them required a timed (but free) ticket to enter the walls area. As we didn’t think of getting tickets in advance, we had to admire the changing walls from the outside.

In addition to the Walls and the street art, we also visited  two of the neighborhood’s fascinating arts-focused “museums”:

At this very comprehensive and interesting museum, a knowledgable and enthusiastic manager gave us a tour and provided us with new insight into the world of grafitti. The museum starts with display of graffiti artist’s tools of the trade: a wall of paint spray cans in colors, many of which are long gone out of production. Our guide told us how difficult it was to create graffiti with such spray cans as they were not meant for “artwork”

We then moved on to exhibits original sketches and photographed images of original 1960s’-era graffiti. “Artists” were called vandals, and were lambasted in newspaper articles, arrested and put in jail. There were dozens of photos of graffiti-filled New York City subway cars.

Then to the first of three custom rooms where selected, commissioned graffiti artists are given rein to design as they wish. (The walls are repainted white after several months and other artists are brought in to create their own rooms.) Back to the chronology in the 1980s when some graffiti came to be viewed as art and some graffiti artists began to get paid commissions. Some began to produce graffiti works on canvas, have it sold in galleries, and have art shows dedicated to their work (think Jean-Michel Basquiat and Keith Herring).

By the 1990s and 2000s, graffiti art was showing up in the finest museums and galleries. In some instances, it was selling for hundreds of thousands or even millions of dollars. The museum had displays of commissioned grafitti on on all types of apparel, skateboards, toys and even furniture. And of course it had a graffiti art bookshop and a chance to but graffiti art toys, coffee cups, skateboards and sketches for prices up to about $5,000. For more serious purchasers, a couple of doors away is the museum’s private, invitation-only gallery that offers more pricey art.

Whether you admire or hate grafitti, it was a very educational experience.

The SelfiMuseum is one of a group of roughly 70 such affiliated organizations in a growing number of cities across the south. It features roughly 30 ever-changing themes and rooms in which members can stage their own imaginative selfies in any of a number of different settings. These scenes range from a wall of donuts, angel wings, a bathroom with a big clawfoot tub and hundreds of transparent plastic balls, mirrored rooms, a room covered in flush pink fur and many, many others. Of course we had to take a few pictures.