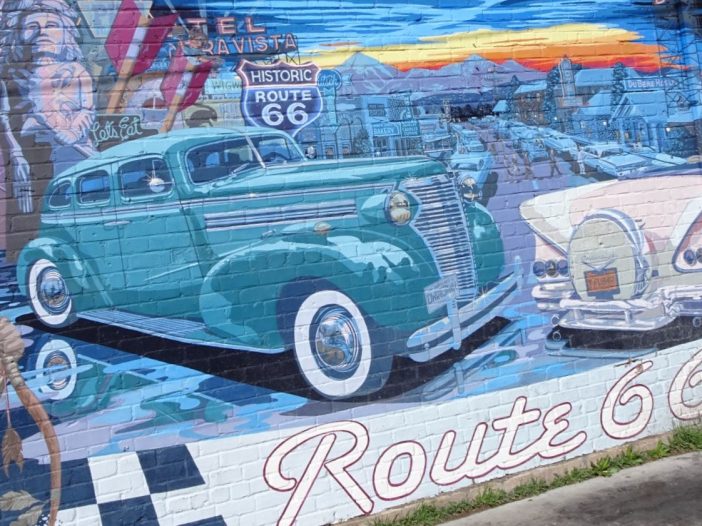 Flagstaff Arizona was first settled in 1876 around cattle and sheep ranching and logging. It was named after a flagstaff that served as a beacon for settlers. Its real growth came when a railroad reached the city in 1882. The train depot became the de facto town center around which its most historic buildings–including the railway station radiated. Between this area and the Northern Arizona University campus, the 65,000-person city now has the largest number of restored late 19th- and early 20th-century sandstone buildings in the country.

The city’s next big growth phase came from tourism due to its proximity to the Grand Canyon, the late 1920s with the completion of the current railway depot and of Route 66, and in the completion of the scenic Route 89A, which links the city (which was incorporated in 1928) with other tourist hubs of Jerome, Sedona, and Oak Creek Park.

It is easy to walk around Flagstaff. The historic train station has been renovated and now serves as the visitor center. Here you can pick up maps and start several self-guided walking tours. We walked two tours: the downtown historic buildings, and the mural of and buildings from along the old Route 66. Another self-guided tour takes you to the stops from The Green Book (which listed hotels and restaurants in which African-Americans would be safe in pre-Civil Rights days).

Route 66 Tour begins at the rail station and follows the original alignment of the famous “Mother Road” Route 66. It swerves through the Southside Historic walk—beginning with Flagstaff’s Route 66 mural. Then comes a number of classic Route 66 motels: a number of which have 20-40-foot metal towers supporting neon signs. And what car route would it be without a gas station/garage or a Craftsman-style church.

Other historic stops included the “Old Main” (the oldest building on the Northern Arizona University campus), a couple of the university’s original sandstone dormitories, and a monument to the 32 Navajo “Code Talkers” who were instrumental in creating and communicating in a code that the Nazis were unable to break.

We spent a fascinating evening at the Lowell Observatory. This is where the legendary astronomer and his colleagues discovered Pluto and created the foundation of the theory for a continually expanding universe. The mountaintop observatory, away from the lights of the city, also offers evening tours and a chance to peruse the planets and constellations from its telescopes. It is a fun and fascinating way to spend an evening.

We planned to spend an evening with live country music at the Museum Club, a huge log cabin bar with a huge collection of historic pictures, western artifacts, rifles, stuffed animals, and so forth. Alas, we were in town on Tuesday. Instead of country music (which was only on Saturday night), Tuesday was its $0.10 per glass beer night that draws college students looking for a cheap drunk–which wasn’t our style. We found a very good, age-appropriate alternative at the lovely Weatherford Hotel. The live blues band started with blues and evolved to Buffalo Springfield, Sly and the Family Stone, and the Rolling Stone. Even better than the song selection, the wonderful guest lead guitarist/singer had a voice between Janice Joplin and Bonnie Raitt. The wonderful band had all of us either dancing or rockin’ in their seats. It made for an enjoyable way to end an evening.

A short, 15-minute drive from Flagstaff takes you to Walnut Canyon National Monument.  A one-mile round trip path takes you down (not to speak of back up) 368 steps to an 800-year-old cooperative abandoned Sinagua community. The Sinagua people built comfortable cliff homes halfway down the roughly 800-foot-deep gorge into ledges beneath overhangs. Here they were protected then from the sun and the elements as well as from more violent tribes. They survived in this arid environment by farming and hunting the land atop the cliffs and by storing water from the spring runoff. Their challenging, yet copasetic life lasted until rainfall slowed and temperatures fell. As a result, community members began to leave in favor of larger, less isolated communities further south.

All was calm around 1000 CE. Villages peppered the area, crops grew as well as could be expected in the semi-arid environment and game was generally plentiful. Then sometime between 1040 and 1100 CE, a series of earthquakes shook the area and sulfurous gasses began to emerge. Many people and villages moved. Those that remained within several miles of Sunset would be immediately destroyed and killed in about 1040 by a giant “Curtain of Fire” when a violent pyroclastic eruption spewed thousands of tons of molten lava and gasses some 1,000 feet into the air. Cinders fell back around the explosive vent to form a cinder cone and an ash cloud rose an estimated 2.8 miles into the air, eventually covering 1,800 square miles to varying depths depending on the distance from the eruption.

A few years after the initial eruptions, lava began flowing from surrounding vents creating two new lava flows: The Bonito Flow covered about 2 square miles to the west of the original volcanic vent with jagged lava about 100 feet deep: the Sana flow a bit less to the northeast of the volcanic vent.

While this was the most recent of the region’s eruptions, it was far from the only one. Volcanologists estimate there were more than 600 eruptions over 1,800 years prior to the Sunset eruption. Most had been long-since forgotten except for the mountains that they formed. This too is beginning to occur in the areas immediately surrounding sunset. Although the cider cone remains barren, isolated grasses, bushes, and trees have begun to pop up in the center of the Bonito and Sana flows. Larger patches of grass mark some nearby ash mounds. Indeed, while cinders and ash will kill most vegetation, layers of about 1-3 inches can benefit vegetation and crops over the next several years by adding a layer of mulch that keeps the underlying soil warmer and moister than it would have otherwise been. Deeper accumulations, however, take much longer to recover.

The combination of volcanic aftereffects dramatically reduced crop yields and hunting opportunities for tens to 100 miles beyond the pyroclastic devastation, forcing thousands of people to abandon their villages. Those just beyond these regions would probably have been helped.

And this was all from a moderate eruption that expelled about 0.12 cubic miles of lava—only moderately more than that of Mount St. Helens, about half that of Kiluhea, and only about 1/10th that of Vesuvius.