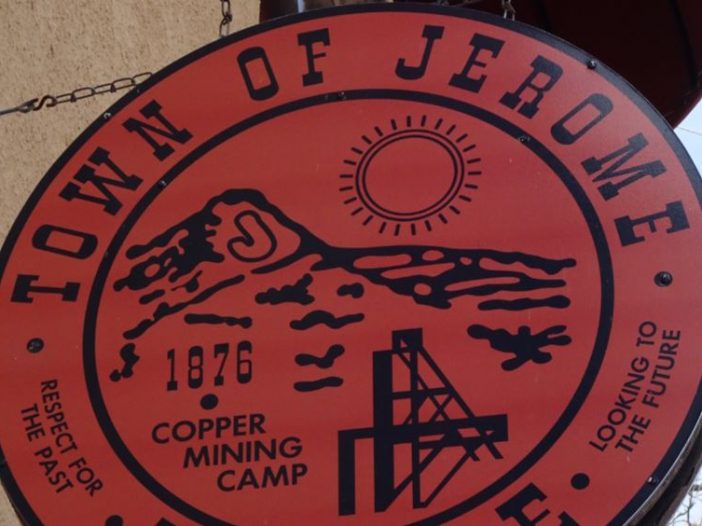 Jerome Arizona is awkwardly located between Sedona and Prescott Arizona in the Verde Valley. It is on the side of an incredibly steep, and incredibly scenic location. The area was rich in copper ore. When a Jesuit missionary “discovered” the area in 1582, he noted that the Indians had excavated a copper mine. In 1883, a New York businessman financed the creation of a mining company that resulted in a boom town that exploded to more than 15,000 people. The community became known as “The Wickedest Town in the West”.

When the mine closed in 1953, Jerome became a veritable ghost town. It has since been renovated and resurrected into a thriving tourist town filled with galleries, studios, boutiques, and museums. Although it still has some ruins, it also has several wine tasting rooms that we discuss in our blog on the Verde Valley Wine Trail.

We spent several hours in the now 5,500-person city, admiring the 19th– and early-20th century-buildings, views over the valley, exploring the pottery and several galleries, admiring the renovated 1896-era saloon, and visiting a couple of the city’s growing number of wine tasting rooms. Then came a pleasant and tasty lunch at Clinkscale (see below) before heading to Cottonwood, the de facto tourist center of the Verde Valley wine industry.

Jerome is a small town with a lot of tourists. Parking can be difficult. While you can sometimes find a paid spot in town, if you drive just a few blocks more, you can often find free parking (some with shade too) just up the road.

A one-mile drive takes you to Gold King Mine, an abandoned gold mine around which a small, roughly 30-person town sprouted. When the mine was abandoned in the mid-20th century, so was the town. Although we didn’t go into the generally family-oriented site (petting farm, gold panning, and so forth), we did see some of the rusted equipment, vehicles, and buildings from the highway and the dirt road that leads to the town.

As this was a day trip, we only had one meal. The Clinkscale . Our very good lunch consisted of a basil-grilled chicken sandwich with brie, arugula, mushrooms, and basil aioli on a baguette plus a delicious, but sinfully rich elote, which is a Mexican dish of corn, crema, cotija cheese, and lime which we ate on tortilla chips.

On a previous trip, we also had a decent lunch at Bobby D’s BBQ where we had a rack of ribs, with sides of onion rings, baked beans, and cornbread.