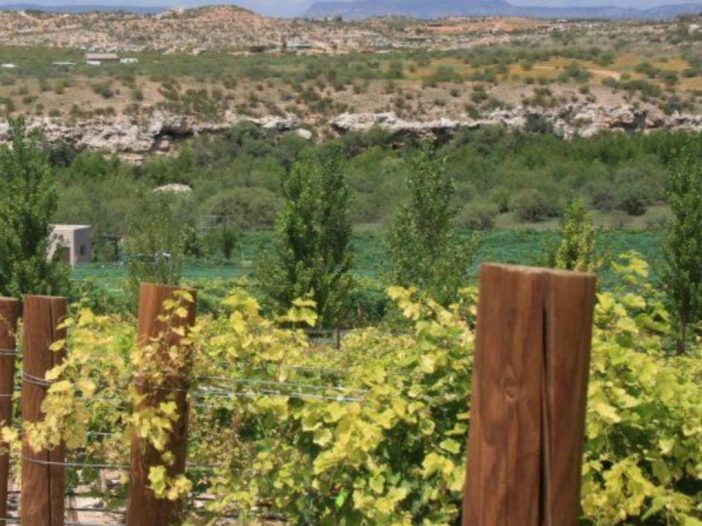 The Verde Valley was a sleepy part of Arizona, often overlooked by travelers on their way from Phoenix to Sedona. When we first visited this area in 2013, we put it on our radar as an area to watch develop. And develop it has. In 2021 it was designated as the Verde Valley Wine AVA, the state’s third AVA (after Sonoita-Elgin and Willcox). The growth of tourists exploring the Verde Valley wine trail has ushered in a revival for communities such as Cottonwood, Clarkdale, and Cornville in addition to well-established tourist magnets Jerome and Sedona.

Although Willcox is still the primary source of grapes for most of the Verde Valley wineries, Verde is already producing some high-quality grapes and its production is likely to increase significantly as recent plantings begin to produce quality grapes and more vines are planted. It, after all, boasts high elevations averaging about 4,000 feet and a large diurnal temperature shift between mid-day and night. The area receives moderate summer rainfall although wind-driven monsoon rainstorms do have the potential of devastating yields (not to speak of grower’s livelihoods) if they come just before or during harvest (typically August and early September for whites and mid-September into early October or reds).

The AVA is relatively small compared to better-known growing regions in the US. The Verde Valley AVA has about 100 acres of vines and is home to over 20 wineries. The free-draining soils are volcanic and sandy loam with layers of calcium-rich soils bring a nice minerality to the wines.

Combine this with the established tourist appeal of Jerome and Sedona as well as the huge range of fitness, wellness, culinary and accommodation options available in Sedona, and you have the foundation of a wine region that could challenge the popularity of regions in California, Oregon, New York, Virginia, and other more established AVAs.

On our 2022 visit, we revisited several wineries that we first explored in 2013 and found some new favorites. Our only regret is that many of the wineries have small productions with limited distribution outside of Arizona. And there is only so much wine we can ship home.

Arizona grapes are featured in most of the Jerome wine tasting rooms.

Cottonwood is the largest city and center of commerce for the Verde Valley. Soldiers first explored it in 1874 and the town was settled shortly thereafter. The previously sleepy, often ignored city recently found itself at the center of Arizona’s newest wine Verde Valley region, and is now in the process of rebranding itself as a wine venue and tourist center. Its main street is lined with tasting rooms, restaurants, and increasingly tourist-oriented shops. After a brief survey of the three-block stretch of Old Town, we focused our energies on a few of the most highly recommended tasting rooms.

We visited three wineries on Page Springs Road in Cornville, just south of Sedona: Oak Creek, Javelina Leap and Page Springs. Although we enjoyed the guest facilities and some of the wines at all three, Page Springs Cellars was the most interesting of the three, not only to us, but to the dozens of patrons who chose to spend Friday afternoon at Page Springs. The winery, which makes about ten different wines, is particularly strong in Rhone varietals. Nothing terribly sophisticated, but very drinkable, with reasonable pricing. But if you want to sample their wines, you pretty much have to visit the winery, which, like the other area wineries, sells virtually their entire productions to their wine club members.

Although Sedona falls slightly outside the confines of the Valley Verde AVA, we’d be wrong to not include it here as it is front and center of the Valley Verde Wine Trail. It was home to the valley’s first vineyard which was planted by Heinrich Schuerman in 1884.  Although the city does not currently have any planted commercial vines, it does have a few of its own wineries and tasting rooms. These include at least one winery, Winery 912, which sources grapes from Willcox, and several tasting rooms such as the Art of Wine, Vina Zona, Decanter and Vino di Sedona which features wines from Verde Valley and from across Arizona.

More importantly, Sedona is the valley’s primary city. It gets 3 million visitors per year and generates $1 billion in revenue. The vast majority of wine visitors stay here and most Valley Verde Wine Trail tours depart from Sedona. Sedona has the vast majority of the valley’s hotels, timeshares, restaurants, and spas, not to speak of hiking trails, stores, galleries, and vortexes. It is effectively the cornerstone of the entire valley and only a half-hour from the Cottonwood and Cornville grape growing region and wineries.

We have had multiple dinners and lunches in the Verde Valley. Dinners were: