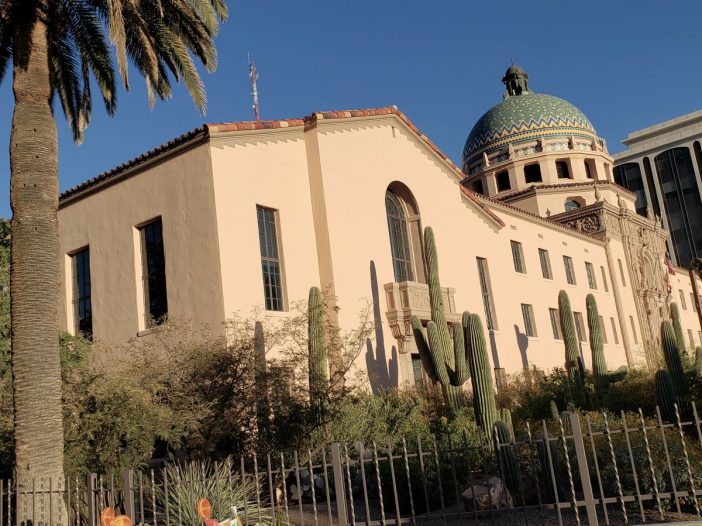 Tucson Arizona is at the base of the Catalina Mountains. As the state’s second largest city, it has something over 500,000 people. It is also the home of the University of Arizona.

The city is a giant sprawl. Our primary interest was in and around the old town and El Presidio Historic District. Interesting sites include:

Beyond the Central City

Although the city’s historic district was certainly interesting, we spent most of our time in areas an hour or two outside the city.

This museum and botanic garden show the diversity of the Sonoran Desert, considered the “lushest desert on Earth”.

The museum is a treasure. We began by following an established route that passes several displays that highlight the region’s diversity. Docents staffed each stop, provided overview presentations, and answered questions. The stops included places where visitors can see animals in natural-like settings. These included black bears, mountain lions, gray wolves, white-tail deer, turkeys, and of course, boar-like javelinas (which are actually peccaries rather than pigs and have molars strong enough to crush the needles of their favorite food, prickly pear cacti). The museum even has models (and a docent explaining) the footprints and scat of each of these smaller animals. A wide range of smaller indigenous animals is displayed in indoor galleries which docents recommended we do after the trail.

The museum’s primary focus, however, was on desert grasslands and how these ecosystems can change dramatically depending on elevation. For example, the “islands of forest” in the desert showed how islands of oak and pine woodlands can develop in areas between 4,500 and 7,000 feet in elevation where water is not too far from the surface.

The Desert Loop Trail is a roughly half-mile loop off the main trail that provides a guided walk through a natural landscape and describes many of the resident plants. A few examples include many types of cacti including:

Then there is one of the most unusual cacti, a saguaro called the Crested Saguaro. It begins growing laterally and develops large crests that can be up to six feet long and take on weird shapes (including folds that appear almost like a human brain).

While most of the visible cacti appear to be alive and well, many species—especially the saguaro—are threatened by warming, declining rainfall, and especially the depletion of water tables due to overuse. Their numbers have declined precipitously over the last 10 to 20 years and we saw the remnants of many wood-like skeletal remains.

The desert walk’s interpretive panels and docents also identify and explain the unique survival adaptations of dozens of other local desert plants. Examples include:

Colorful wildflowers were scattered among the brown sandy soil and the green cacti during our springtime visit.

From this natural setting we moved into a series of beautifully planted cacti gardens which displayed, identified, and briefly discussed hundreds of species, many of which do not natively occur in the museum’s desert environment. It also has an agave garden with more than 200 agave and other succulent species (cacti represent only one branch of the much larger family of succulents). It described how agave accumulates sugars over many years and how they flower and spread their seeds only once, after which they immediately die. It is, therefore, just before flowering when cultivators harvest them for use in tequila and mescal. Current cultivation focuses primarily on the plant’s core or pina, While Native Americans also used the core to make alcoholic beverages, they made much greater use of the total plant. For example, they used the plant’s fibers to make mats and sandals and used its chemicals to ward off animals, make poison arrow tips and stun fish to make them easier to catch..

Other sections of the landscape were dedicated to specific types of animals that are most instrumental in pollinating the area’s cacti.

Other sections and galleries are dedicated to displaying the origin and use of the region’s minerals and gemstones and to the lifecycles and roles of the area’s smaller animals including invertebrates, reptiles (including rattle- and coral snakes and hila monsters, the country’s only venomous lizard), amphibians, birds, fish and other riparian creatures such as river otters and beavers. It describes each of the area’s various ecosystems (including the dramatic temperature, humidity, and vegetation differences as you progress a couple of hundred feet in elevation from desert grasslands to the succulent desert to higher chaparral environments and especially underground, where many insects, reptiles, amphibians, and small mammals shelter. One was even dedicated to prehistoric Arizona and the Sonorasaurus dinosaur which was native to the Sonoran region.

For those brave enough, guests can wander through a cacti labyrinth.

Given the museum’s remote location and the time required to explore it, we, along with many others, needed a meal break. We stopped at the Ironwood Café which offered a choice of burgers, pizzas, tacos, agave bowls, salads, and nachos. Our taco salad and nachos were both huge dishes that were loaded with a wide choice of toppings.

The Saguaro National Park was somewhat of a cactus overload after spending five hours at the Arizona-Sonora Desert Museum. Plus the park did not have a significant visitor center exhibit to orient visitors. Still, we enjoyed exploring the park by taking several relatively short walking trails and by driving (with frequent stops) around the scenic and educational Bajada Driving Loop.

Interpretive signs, and the few rangers that were available, explained and provided virtually unlimited opportunities to see all types of cacti, but especially the huge saguaros—along with interpretive panels throughout the park. We learned that there are more than 200 species of animals and 600 types of plants in the Sonoran desert and that saguaros are the largest indigenous cacti.

These giant plants, which typically reach only the size of a thumb (above ground) in their first seven years of growth, can live and continually grow to reach 50-60 feet in height and weigh more than seven tons at full maturity of about 200 years. By that time, if not sooner, they die of some combination of freezing, wind, lightning, disease, or vandalism.

As they have soft, rather than woody stems, they are considered plants, not trees. Fully mature plants may produce and release more than 2 million seeds over their lifespans. However, the odds of the seeds rooting are plummeting every year. Due to a combination of higher temperatures, reduced rainfall, and the proliferation of invasive grasses (especially buffalograss) the park has about 70 percent fewer saguaros in the park than 15 years ago. Those that do survive can grow rapidly, especially after large rainfalls during which their vast, shallow root systems soak up huge volumes of water. Their ribbed exteriors act like stretch pants, expanding their girth by up to 25 percent as the water is absorbed into the plant’s fleshy interior. Those that die end up as eerie woody skeletons standing among the giants.

Although we are used to seeing elegant saguaros with tall center stalks and elegant arms that turn up to the sun, relatively few have these arms. First, it takes about 100 years of growth for arms to begin to grow. Those that do grow arms can have anywhere between one and ten or more. And arms dramatically increase their odds of siring subsequent generations since flowers (which bloom for only 24 hours) only grow on the tips of the plant. One arm translates into one flower, hence fewer seeds. Multiple arms can generate up to 22 million seeds over a full lifespan. Nor do all these arms grow upward. Some grow more horizontally. And as they age—just like many species of plants and animals, their support weakens, and body parts (arms in the case of saguaro) slump.

Although the saguaro’s thick skin and sharp spine protect the plant from many dangers, hungry mammals may work around the defenses when food and water is limited. Some like javelinas have such powerful molars that can crush and swallow the spines. Meanwhile, multiple types insects and a few species of birds (especially Gila woodpeckers) bore holes into the plant to create nests. So many that the giant cacti are sometimes referred to as “saguaro hotels”.

And then there are humans. While American Indians have generally treated these giants with respect, harvesting the fruit (such as to make jams, jellies, and wines), today’s poachers exercise no such restraint. They harvest entire plants and sell them on the black market as lawn ornaments.

Here are some other interesting facts that we picked up from the park:

Kingfisher Bar and Grill where we began with a nice Caesar salad (with extra anchovies, of course), followed by somewhat decent, but not especially tasty steamed littleneck clams and the best dish of the evening, grilled whole Ruby trout with charred tomato vinaigrette, bacon, green apple, red onion, and Israeli couscous and spinach. We had two miscues with wine, with the restaurant being out of our first two choices, but were satisfied with our third choice of 2018 WillaKenzie Willamette Valley pinot noir.

Jonathan’s Cork, for two entrees—grilled, pistachio-crusted lamb chops (six large ribs) with creole mustard cream sauce and garlic mashed potatoes, and grilled with a pepper sauce (which overpowered the meat) and wild rice pilaf. Both dishes were okay (other than the pepper sauce which could be easily removed, but nothing was particularly memorable. Wine, another pinot—this from Sonoma Coast—a 2015 Hanzell Sebella which opened up very nicely.

Flying V Bar and Grill We had 2 entrees here, both were overcooked the first time. The second try was much better and the restaurant more than compensated for the inconvenience. Tom’s veal chop (hibiscus and honey glaze), was perfectly done and came with wild rice and turnips. Joyce’s Alaskan halibut was good—but the sautéed wild mushrooms that came with it were better than the fish. Our wine was a 2017 Rex Hill Willamette Valley Pinot Noir. Our dessert was a nice flourless chocolate cake with chocolate ganache, raspberries, and whipped cream.

We stayed at the Hilton Home2Suites in downtown Tucson. Although it seemed to be a new building the soundproofing was not great. You could hear outside noise such as dogs and trash pickup as well as inside noise such as the people walking around above you, and TVs from nearby rooms. The room itself was decent although we will never understand why they put the bed so close to the blowing air conditioner window unit. Like most suite hotels, the room had a microwave, refrigerator, and coffee machine in the room. The complimentary breakfast was standard eggs and sausage.  While they charged $15 a night to park, meters out front of the hotel were plentiful and free between 5 pm and 8 am and $1 an hour outside of those times with a 2-hour limit. If there is a next time, we will try a different place.