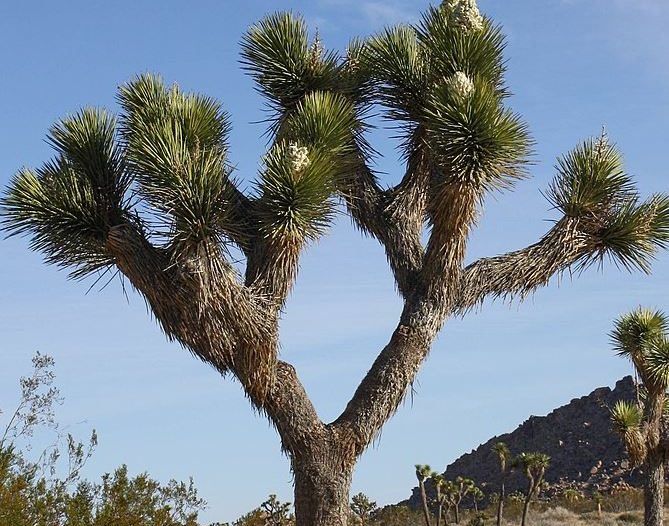 The Mojave and the Colorado desert ecosystems come together in California’s south-eastern Joshua Tree National Park. The park is huge–slightly larger than the state of Rhode Island. Whether you like hiking, camping, rock climbing, biking, birding, horseback riding or just enjoying nature, the park has a lot to offer.

The park has several entrances and a lot of variety. The best approach is to enter from the northwest (Joshua Tree entrance) in the higher-altitude, moderately cooler, and wetter Mojave section of the park. This is also the area where most of the Joshua Trees are. You can then drive through to the lower-elevation, hotter, drier Colorado Desert section to the south (Cottonwood entrance at Twentynine Palms). Along the way, stop and explore the amazing dessert variety. Unfortunately, we had a car issue on this trip. Due to the lack of time, we were only able to explore the area around the Cottonwood entrance.

The Colorado Dessert portion is in the eastern section of the park. We had time for a short hike that went through an oasis, where subterranean faults created cracks to allow groundwater to seep to the surface, created a virtual Garden of Eden (at least compared with the rest of the park). It had towering California palms, Blue Palo Verde, Smoke trees, and ocotillo. It also had small cacti and a few tiny desert wildflowers, each with its own unique strategy for surviving in this brutal environment. Also present was the ubiquitous mesquite. The Cahuilla Indians made this the stable of their diet by drying the beans and grounding them into flour.

Although we missed the Joshua trees in the park, we have seen and learned about them on a previous visit.

Although they are called trees, Joshua trees are not trees but yucca palms or palm tree yuccas. Although they are especially prominent in Joshua Tree National Park, they are found throughout southwestern U.S. grasslands. In the world of dessert plants, they are very fast growing at about 1.5 inches per year. They have lifespans of several hundred, and in some cases, more than 1,000 years. Definite dating of the trees is difficult as their trucks consist of thousands of small fibers and lack the annual growth rings that define the age of most other trees. Their growth rates and age, however, depend on the amount of rain that falls in occasional torrential storms and the ability of their deep (about 36 foot) roots can draw upon between storms.

Some believe that early 19th-century Mormons named these often top-heavy trees after the biblical figure Joshua. They believed the limbs of the trees were guiding them westward. Another story is that the limbs looked like they were in prayer. No one is really sure.

The native people weaved the leaves into baskets and sandals. They ate the flower buds and seeds.

Joshua Trees can grow either from seed or from underground rhizomes that spread around a parent tree. Their 5″-10″ dark evergreen leaves are shaped like sharp, serrated bayonets, and grow in spirals from the stem. Spring rains may bring clusters of white-green flowers on long stalks at branch tips.