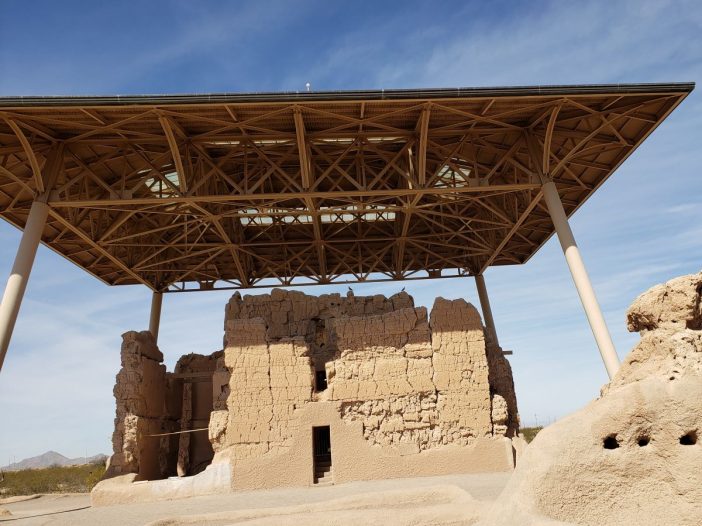 Coolidge Arizona would not normally be a destination but it was on our route between Tucson and Phoenix. Since we were in the area, we couldn’t resist stopping at The Casa Grande Ruins National Monument. The monument was established as the country’s first national architectural reserve in 1892.

Casa Grande was the largest building in this 1,000+-person, 12th-century Hohokom agricultural community. A Spanish Missionary named it Casa Grande or Great House as he thought it similar to a Spanish palace and assumed it to have been some form of palace or temple. In reality, nobody knows its origin or use.

Although many specifics are unknown, we think we know some things. The town was a trading, social, sports, and ceremonial site for several surrounding villages that drew water from the Gila River (which was drained dry by the 1920s). The town was built in the early 14th century. The Great House had four floors and holes that aligned with the summer solstice and with equinoxes.

The center of the town contained a ball court and a large central plaza, in addition to the Great House. It was surrounded by concentric rings of many other buildings (most of which are thought to have been private dwellings shared by extended families). Trash disposal and burial sites were located outside the town. The inhabitants developed an extensive network to irrigate crops including corn, squash, beans, and cotton.

The town was abandoned within about 100 years after Casa Grande was built. Nobody knows why it was abandoned. Most, however, expect it had something to do either with severe weather or a population that had overtaxed the water supply.