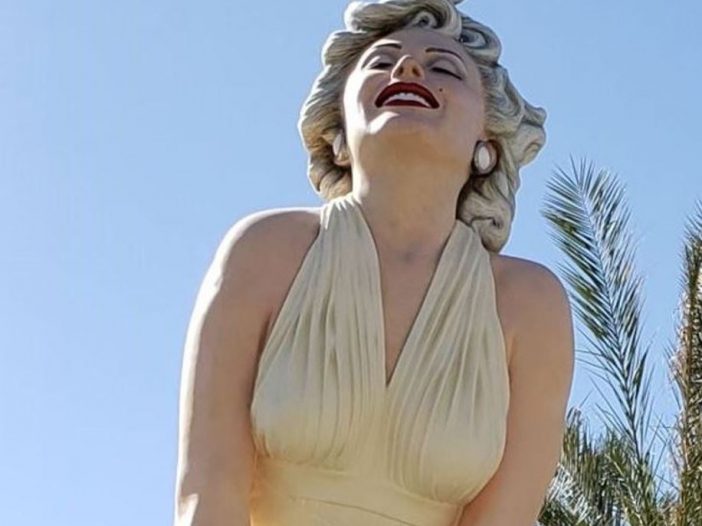 Palm Spring California was the home of and still has the county’s largest concentration of the overwhelming majority of so-called Mid-Century Modern buildings. Most of these buildings were built from the mid-1940s through the 1960s. The style was used for both residential and commercial buildings. It is generally characterized by wide, low footprints, large open spaces, floor-to-ceiling windows, and a focus on bringing the outdoors in.

Homes of the Rich and Famous

Not surprisingly, many of the largest and most luxurious Palm Springs homes were built by Hollywood executives and especially stars (many of whose contracts required them to remain within two hours of Los Angeles should they be required for an emergency shoot). The names of the homeowners bring back memories of Hollywood and entertainment royalty from the 1940s and 1950s. Think Bob Hope, Cary Grant, Kirk Douglass, Steve McQueen, Liberace, Elizabeth Taylor, Zsa Zsa Gabor, Dinah Shore, and Marilyn Monroe.

And speaking of Marilyn Monroe, her famous subway grate photo is commemorated in a 26-foot statue in the center of town.

Palm Springs was also Ground Zero for most of the Rat Pack. Dean Martin, Peter Lawford (with his inlaws Jack and Bobby Kennedy as quasi-frequent guests), and Chairman of the Board Frank Sinatra, all had homes there. And while Elvis didn’t own a home in Palm Springs, he did rent a home during the first year of his marriage to Priscilla—and threw wild parties.

The most famous mid-century modern home of all, however, or at least the one that is most architecturally significant, was owned not by Hollywood royalty but by a Pittsburg department store owner, Edgar Kaufman. He is more frequently associated with another famous, architectural gem—Frank Lloyd Wright’s Fallingwater.

Kaufman, in fact, originally asked Wright to design his Palm Springs winter home. Wright generally did not turn down a commission. However, when he was asked to design Kaufman’s desert home, Wright claimed that he didn’t understand desert design and turned it down. This was surprising since he had created the incredible Taliesin West a decade before and another noteworthy Palm Springs building the Oasis Hotel two decades before.

Instead, Kaufman hired Richard Neutra, who had previously worked for Wright at Taliesin East. After seeing the home, Wright did another unusual thing: he complement another architect and congratulated Neutra on the project. Kaufmann meanwhile, has the distinction of having commissioned two of the most architecturally important homes in the world: the masterpieces of both Prairie Style and Mid-Century Modern.

Neutra became the most prominent of mid-century modern architects, despite designing few other Palm Beach homes.

Among other prominent mid-modern masters who designed some of the most renowned Palm Springs homes of the genre were:

The city also has a number of mid-century modern planned neighborhoods. While the Alexander Construction Company’s Steel House neighborhood did not come to full fruition, a number of others did. The largest and best known of these is Las Palmas Estates (by architect William Krisel), which is home to the greatest concentration of, and many of the most renowned of these homes including the Edis, Kaufmann, Dinah Shore, and the House of Tomorrow. Other communities include Racquet Club Road Estates (with the Grace Miller House—also be Neutra), Twin Palm Estates, and El Rancho Vista Estates.

A number of notable commercial buildings also are in the mid-century modern style. Among the most acclaimed are:

As our time was limited here—not to speak of the hot 90-degree mid-day temperatures—we limited ourselves to only one, relatively short hike: The Araby Trail.

This 4-mile up and back hike climbs 800 feet into the mountains, where it intersects with three other trails. The two-hour hike took us steadily up (with one significant downhill stretch near the beginning) with continual views of the valley, surrounding mountains, and the homes above—with one pretty patch of wildflowers. About a third of the way up, we spotted Bob and Dolores Hope’s large concrete eyebrow home peering over a ridge, complete with a large round water tank, pool, tennis court, and putting green. The trail had continual lovely views over the arid, brush-covered mountains and valley to the top of our trail, which provided an even more panoramic view.

And no visit to an area is without meals. We had 4 meals during our 2 days in Palm Springs.

We also had two lunches: