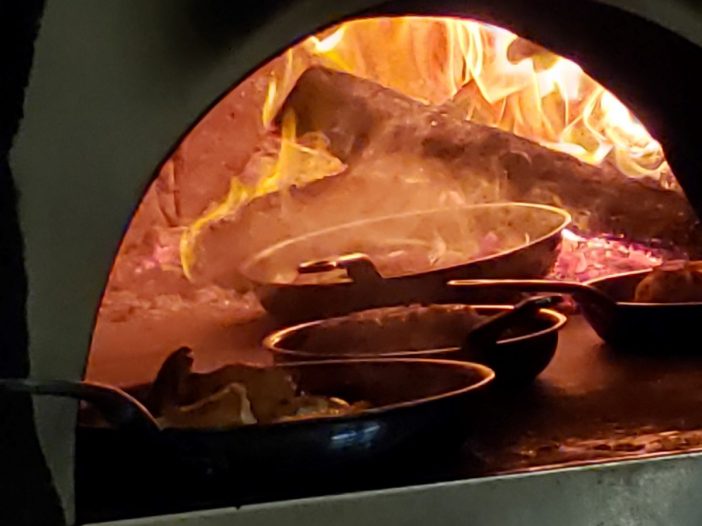 Any time we visit a city, we always explore some of the city’s newest culinary experiences. Los Angeles is no exception.

We always enjoy walking through (and often stopping to pick up food at) the city’s large, wonderful Grand Central Market. It is fun to explore the dozens of small vendors. They offer everything from a choice of dozens of different types of dried peppers, meats, and bread to small restaurant stands specializing in dishes such as tacos, fried chicken, ramen, juices, eggs, and donuts. It is hard not to stop to pick up a snack or a meal.

Then, at the other end of the food spectrum, we like to eat at restaurants by some of the state’s most heralded chefs, from a casual lunch restaurant created by California Cuisine pioneer Alice Waters to former French Laundry chef de cuisine Timothy Hollingsworth—both of which just happen to be housed in museums that we visited.

Here are our thoughts on places where we have eaten.

Otium, from former French Laundry sous chef Timothy Hollingsworth, is a dinner-only restaurant at downtown L.A.’s Broad Museum. We had an entire meal of small, but very rich dishes, beginning with two orders of naan with two spreads—one a wonderful chicken liver mousse and the other a very rich, but less interesting bone marrow reduction. We then had two orders of larger, densely packed duck croquettes that were a bit dry on their own but delicious when eaten with the accompanying poached prunes and parsnip puree. Although we planned to order an additional small dish or at least a dessert, we were done in by the incredibly good, but super-rich spinach bucatini with bacon, clams, parmesan, and confit egg yolk. Our wine was somewhat acidic, but still nice 2019 Brickhouse “Le Dijonaise” Pinot Noir from Willamette Valley’s Ribbon Ridge AVA from the extensive wine list. Almost as impressive as the food and wine list was the open kitchen which you are welcome to walk through, ask questions, and take pictures. If only we could have even considered one of their huge, incredibly delicious-looking 64 oz (or even 32 oz) tomahawk steaks.

Drago Centro is an Italian restaurant that friends recommended. Tom enjoyed his perfectly cooked roasted lamb loin with eggplant puree and roasted potatoes and vegetables.  Joyce’s clams and mussels steamed in tomato, white wine and garlic were too small and spicy for her. Tom found them acceptable but far from the best we have had. The server recommended a 2018 Fontoda Chianti Classico as they were out of the Riserva we had ordered. The wine was young, but quite nice after decanting and swirling. We were both very disappointed by the cannoli with ricotta and pistachio cream dessert. While it was OK, we have no interest in returning.

Lulu is a new restaurant (2022) at the Hammer Museum. California cooking legend Alice Waters conceived and created the restaurant as a place that procured food from nearby farms that grow foods using methods that combat the climate crisis. Joyce had a tasty, but not especially interesting dish of Tunisian meatballs with spiced tomato sauce, couscous and chickpeas. Tom had a very nice, three-course lunch that began with gem lettuce with anchovy dressing and parmesan. A small, but very good fish and mussel stew in saffron broth with rouille toast followed. His meal was finished with an almond cake with strawberries.

Fanny’s is another new (2022) restaurant. It was named for actress Fanny Brice and is located at the Academy Museum of Motion Pictures. Our lunch was decent, although not especially distinctive albacore crudo (burger) with coconut brittle and Thai bird chili on a brioche bun. Joyce’s first choice of a ham and brie sandwich was sold out. Her fallback was a burger with provolone. She was dismayed by the dried, heavily charred surface (which Tom rather enjoyed) but found the interior to be passable, albeit not very tasty. Overall, we were quite disappointed.

Pez Cantina. We were in the mood for a Mexican preparation of fresh seafood. Unfortunately, the concept at Pez Cantina was more interesting than the preparation. We were disappointed with our two main lunch courses of fried oyster tacos with cabbage pico de gallo and salsa negro and fried yellowtail grilled Mexican sandwich with cabbage pico de gallo. Both were over-breaded. The yellowtail was mushy and the oysters lacked taste. However, we did enjoy the guacamole and our flan and leche cake dessert with raspberry and blueberry compote and chocolate sauce.

Sea Salt Fish Grill. We began our lunch here with a nice, if somewhat greasy frito misto mixture of shrimp, calamari, fish, and zucchini with marinara sauce. Our main courses of Ecuadorian shrimp and grits with merguez sausage ragout, and wild Ecuadorian swordfish with zucchini and brown butter sauce with capers, were quite good. So too was the service.

Angelini Osteria is a wonderful, casual Italian restaurant in West Hollywood. We began with a very crisp flatbread and complimentary pasta salad with onion and red and yellow peppers. Our main dishes were grilled lamb chops (three large ribs) and a huge portion of beautifully seasoned grilled octopus, both served with greens. Very nice.

Catch LA is also in West Hollywood. We especially enjoyed one of the signature dishes: Truffle sashimi, consisting of both tuna and hamachi with chili oil, ponzu, caviar, and black truffle. Less enjoyable was the Alaskan king crab hand roll. Our main dish, another specialty, was somewhere in between. It contained the meat equivalent of a 2.5 lb. lobster but, instead of all of the work of dealing with the body, it came as five split tails and three claws. It was a very civilized way to eat lobster. It was served Cantonese style with sake, oyster sauce, scallions, and garlic. While quite nice, we felt the oyster sauce was a bit too pronounced for the delicate lobster. Our wine was a nice Domaine Vocoret Chablis.

Kimpton Everly Hotel in Hollywood. The first surprise was that parking was very expensive and the valets could not identify any alternative. Great! Usually, there are options around, but apparently not here. We reluctantly parked with the valet as it was late and we were tired. In our room, we found the normal comfortable bed, yoga mat, and bathrobes (thank goodness they no longer do those god-awful tiger robes). We discovered the next morning that we had to request to have a coffee maker in the room. Seriously? For a pricy hotel room and we had to request a coffee maker? Whatever. The best part was that we could see the Hollywood sign from our window. Bottom line: way overpriced even if it was competitive. Next time, we stay in another area.

Sheraton Grand 711 South Hope Street. The lounge was still closed in 2022 due to covid but with our elite status, we were given breakfast vouchers. Elevators are the fancy ones that identify which elevator to get on based on the floor you are going to. The room was comfortable. Robes provided. We had a room with a patio. While the view was ugly, you could go outside if you wanted. The bed had a pillow top on it and felt like it was older, but it was still comfortable. A light pole by the bed had outlets on it but they didn’t work. Comfortable and good location. We would stay here again.