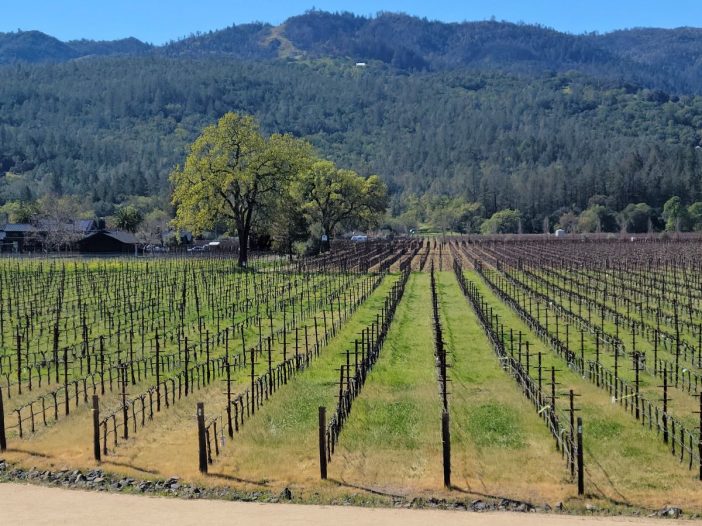 Premiere Napa Valley (PNV) is Napa Valley’s primary showcase for futures auction of barrels of its most recent vintage wines. The event attracts wine professionals and those from the wine trade and media from around the world. It also attracts us. It gives us a chance to taste and report on vintages that we will be seeing in the future.

Some tastings are organized by appellations. Others are organized by a specific winemaker and others have no particular theme that we can discern. We sometimes ran into the same wine or winery in multiple locations. But regardless of where we taste the wines, PNV provides a unique opportunity to pre-taste hundreds of extraordinary wines. Some of these are new releases of wines that are available to the public. And then there are the special PNV wines which are very small production lots created from a winery’s best blocks. These are offered at Saturday’s Vintage Perspective Auction which is the valley’s largest charitable fund-raising event.

It is impossible to go to every tasting, but we hit quite of few of them. Most of the prices for the Premier wines have not yet been determined and most are produced in very small quantities. While final pricing may be out of our league, it didn’t stop us from identifying our favorites. Of course, our tastes may bear no resemblance to yours. But rather than trying to describe our perceptions of the particular aromas, tastes, and textures we get from each of the roughly 1,000 wines that we taste over the two days, we generally highlight those we believe have the best potential of aging into our preferred taste style: generally those with darker berry fruit, leather, and tobacco tones and softer, more fine-grained tannins.

The following wines are those that we believe have the best potential for evolving into complex, elegant wines that we feel deserve following up with over the next several years.

Characterized by its well-draining, crushed volcanic, gravelly soil and long sun exposure, the six square mile Rutherford area provides an ideal growing area for many grape varietals. Given the economics, however, it is dominated by Cabernet Sauvignon, distantly followed by Sauvignon Blanc and a dozen other varietals. This tasting represented 16 wineries. Among our favorites were the following.

This 1,000-foothill above the eastern Napa Valley floor is home to some of the most prized (not to speak of expensive) Napa Cabernet Sauvignons. This year’s tasting was smaller with only five wineries participating. But the tasting yielded a few wonderful, albeit expensive ($200+) Cabernet Sauvignons that were among our favorites of the week. These were:

An always impressive tasting made even better by the snacks (charcuterie, steak sliders, pork belly skewers, and more) prepared by Brix restaurant, where the tasting is held. Among our favored Oakville wines where

And, special mention for one of the more compelling bargains we found at the tastings we experienced:

This tasting, at which a dozen wineries were represented, included finds such as:

Our favorite Napa appellation poured several of the AVA’s premier Cabernet Sauvignon, along with a couple of Sauvignon Blancs. Among our favorites included:

About 20 smaller, family-owned wineries participated in this tasting. As always, we found a number of very worthy PNV and other wines.

One of the newest of Napa Valley’s 16 AVAs, this cool region produces a range of subtle wines including:

Unfortunately, since there are so many tastings that are spread across the valley and held at the same or overlapping times, we were not able to attend all those that we had wished. The most egregious of these “misses” was that of Mt. Veeder wineries. Other, smaller, typically single-winery tastings we had to skip included Grgich Hill, Chimney Rock whites, Trefethen, Acumen and Spotteswoode. maybe next year–pandemic or other disruptions notwithstanding.

This said we did get to a few other winery-specific PNV tastings.

A number of wineries also offer special tastings of their PNV wine in addition to some of their other premium wine, typically accompanied by snacks, entertainment and, in a few cases, full lunches. Among these tastings were:

Although we would have liked a chance to do a number of other such tastings, there were so many large, multi-producer tastings spread over the two primary tasting days that we didn’t have time for more.

Since we were in Napa, we allowed enough time for a few of our own tastings at longstanding favorite wineries and a few with which we were less familiar. These included: