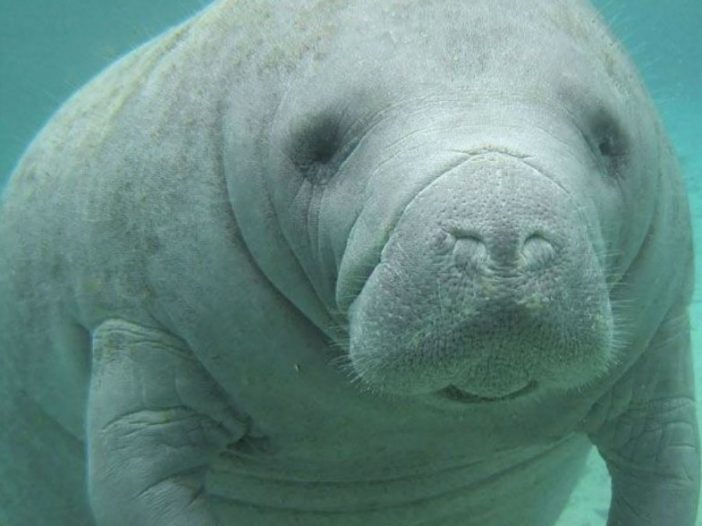 Crystal River Florida is a coastal city in the western part of the state. It is home to the Crystal River National Wildlife Refuge, where manatees shelter year-round. And manatees were what drew us here. Manatees can also be seen at the nearby Homosassa River, which is generally less crowded with snorkelers and kayakers than the nearby Crystal River. The tour company will go to whichever location has the best opportunity to snorkel with the creatures. We have twice taken snorkel trips out of Crystal River with the tour group Snorkeling with Manatees.

Manatees are large marine mammals that are also known as gentle sea cows. They average ten feet in length and average 1,000 pounds. A few grow to over 12 feet and 3,500 pounds. Man has not been kind to these gentle giants that look like huge, gray potatoes (with a few hairs) with dragging a paddle. Despite several laws protecting these creatures, most have been scarred, and several killed by boat propellers. Meanwhile, climate change and algae blooms (from pesticides and other chemical runoff) are killing the seagrass on which these mammals feed. Conservationists are replanting sea beds with eelgrass and on the East Coast, even harvesting seagrass from other areas and dumping it in feeding areas.

While manatees usually live along ocean or bay shorelines, they cannot survive in water colder than about 68 degrees. During winter, therefore, they often come into freshwater rivers whose waters are warmed by natural springs (such as those in Crystal River) that maintain year-round water temperatures of 72 degrees, or in waters that are warmed by water from shoreline nuclear power plants.

How to Snorkel with the Manatees

The first time we snorkeled with the manatees here, we were allowed to pet and scratch (under their bellies and under their fins) our fill of manatees. Things have changed since that trip 10 years ago. This time the day started off with a mandatory 30-minute orientation before getting in the water. You are no longer allowed to touch them. You are instructed on how to—and especially how not to—interact with the typical shy, but human-accustomed creatures. You then suit up in a wet suit, both to keep you warm and to help you float above the manatees.

Then it is time for the big event.

Up Close with Manatees

We took a pontoon boat to spots at which manatees were feeding or resting. As we gently slipped into the river so as not to disturb them, our guide handed us noodle floating devices, which are also mandatory to keep us floating above the manatees. Our six-person cruise (the maximum on boats from the company we chose) made two manatees stops:

We then made one additional stop over one of the roughly 100 underwater vents into which underground springs flow into the river. Our guide dove down (no easy trick in a full wetsuit without weights) roughly 10 feet into the vent before surfacing. While we mostly saw small fish at the site, we did see a couple of good-sized large-mouth bass and a few red snappers who, like the manatees, temporarily left their native saltwater habitat for a bit of warmth.

Despite its name, Crystal River is not always crystal. On both trips, some spots were so murky that we couldn’t see anything more than an arm’s length from our faces. But in other spots, we had a better view.

Another location where one can see manatees is nearby Three Sister Springs, where three underwater springs come together to feed the Crystal River. Our tour guide made a stop there on our first trip to the area. The water was so clear that you could see perfectly from one bank to the other, and see fish from 20 feet away. We were lucky to see a mother manatee and her roughly two-year-old calf who had left the sanctuary (where divers are not allowed) and join us in the river. Seeing manatees in clear water was a qualitatively different experience. Overall, however, the combination of both experiences was much greater than either one on its own.