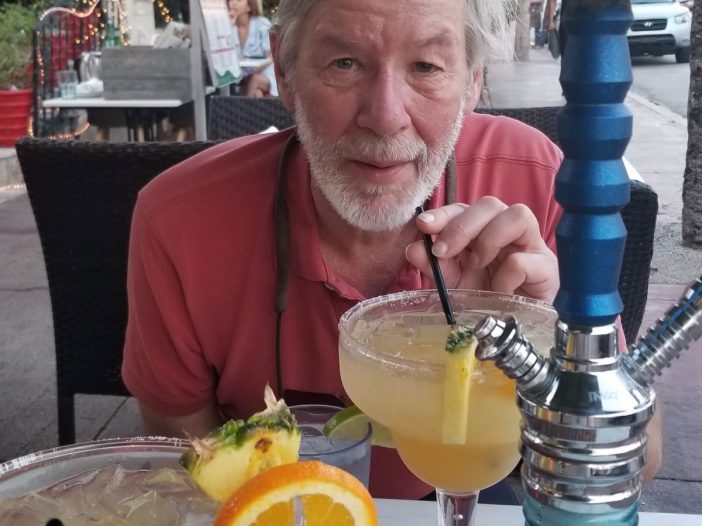 This is a compilation of our many Miami Florida restaurant dining experiences (sorted alphabetically) updated in 2022. Unfortunately, we had to remove many of the places we had previously enjoyed as they are now permanently closed.

2012. Don’t expect the Ritz. Simply prepared, fresh off-the-boat seafood in a fish market that opens onto a casual restaurant with picnic tables, bench seats and an open-walled back deck. But the food, the service and the view over the Miami River are great. We shared a dozen oysters, she crab bisque, stone crab claws, grouper sandwich and grouper salad. All were very good. The servers were  knowledgeable and more than accommodating. What more could anyone look for in a casual seafood restaurant?

2022. On our return visit, Tom ordered his fourth (and probably last) straight day of stone crab while Joyce had grilled shrimp. The crab was more expensive sue to supply issues, but just as sweet. Joyce was somewhat less enthused with her shrimp, especially in comparison to what she had the previous day at Islamorada Fish Company. We also noted that they had a much more limited selection of wines. Still, this continues to be a must-stop place anytime we are in Miami.

2019. Tom has a passion for stone crab. Each time we go to Florida, he has to have his fill. Joe’s Stone Crab (the cafe versus the more formal restaurant) offers reasonably priced stone crab at an informal setting. Tom was very happy with his stone crab claws. We also had two other, much less satisfying dishes: fried oysters (small and over-fried) and grouper sandwich. We also ordered a side of creamed spinach. You could choose with or without garlic. We choose without garlic and realized how much garlic added to creamed spinach.

2016. While it is in the same building as the old-line, very stuffy Joe’s Stone Crab Restaurant, it is a world apart. This place is light, cheery, friendly and non-pretentious. It has a large selection of very fresh, raw and lightly steamed seafood, salads, soups and sandwiches and every size crab claw, from large through jumbo. You order the food at a counter, select wine from a rack (at retail, rather than restaurant prices) and sit either at a table or a counter.

We split a sinfully thick and creamy stone crab bisque, a large order of stone crab claws, lobster mac ‘n cheese and a salad, along with a bottle of Four Graces’ Pinot Gris. And since we can never have too much of a good thing, we returned a second time on this trip. Tom again had crab claws (selects), Joyce a tuna burger and we shared another bottle of Four Graces. Pricing is very reasonable and food and service is great.

2014. We have boycotted Joe’s Stone Crab for over a decade since the stuffy main restaurant forced Tom to wear pants over his shorts on a hot Florida afternoon for lunch. Times change and so has Joe’s. Looking into the restaurant we saw people with shorts on (lunch time). Still we went next door to the Take-Away, which was a totally different animal–less expensive and much, much more casual. It is lined with food cases where you can view and order a range of light dishes and a retail wine store at which you can buy bottles at very reasonable retail prices to drink with your meal and at counter or tables. We sat at the bar to order and when we asked for two glasses of Four Graces Pinot Gris, our friendly server told us that we could get a bottle for the same price as two reasonably priced glasses. It worked for us and went very well with Tom’s large stone crab claws, Joyce’s lobster roll and some of the tastiest herbed onion rings we have ever had. One experience and we were converts. A great spot to enjoy the local delicacy. Good price, good service and good food.

2022 – Another return visit. While we continue to be impressed by the architecture, the design and the view, we were less impressed by the food this time than on either of our previous visits. We shared two dishes and of course, a bottle of wine. The dishes were grilled octopus spiced with a cumin-based sauce with crispy Peruvian potatoes and a Peruvian yellow pepper dipping sauce and a seafood pasta with shrimp, clams, calamari, tomato confit, and a lobster bisque base. While both dishes (especially the pasta dish) were okay, we found them to be non-distinctive—not what we expected from our previous visits or the prices. Our wine, one of the few reds for below $100, was a decent 2018 Gran Moraine Yamhill-Carlton Pinot Noir from Willamette Valley.

2019. We made a return visit to this wonderful restaurant located atop a parking garage. The beautifully-designed space offers a panoramic view of the city. The restaurant provides consistently good contemporary food. We began with seared foie gras (not as good as that from Pied de Terre) with leeks and candied almonds, followed by a wonderful miso-glazed Chilean sea bass with ratatouille. Our wine was a 2015 Gran Moraine Willamette Valley Pinot Noir. The service was so attentive that it was almost too fast. Once again we were quite pleased.

2012. This was an incredible treat. Joyce’s brother, who manages a large airport parking garage, was with us on this trip. We surprised him by taking him to a restaurant atop the most famous parking garage in the country–Miami Beach’s 1111 Lincoln Avenue Garage (see our Celebrating Miami Architecture blog).

For those who are interested, the parking garage, designed by Herzog & Miller, is a treat. The restaurant is even more interesting, not to speak of having much better food. Exit the elevator and walk into a lobby that leads to a large outside dining space (where we ate) and a fully glass-enclosed dining room. Our table, on the railing and with a lovely skyline view, was perfect. The service and the food were just as good. We shared three appetizers (cold smoked scallop crudo, crab cuasa croquette and sautéed foie gras with grapes, pineapple mango chutney, and hazelnuts) and two entrees, a perfectly done grilled veal chop with lemon confit, parsnip purée and dried fruit sauce and Chilean sea bass with maple-glazed eggplant, hearts of palm, and soy butter. This was accompanied by cocktails, a nice wine, very good service and a wonderful view. A great time had by all.

2019. This modern French restaurant specializes in Quebec foie gras. We indulged in two of its four different preparations of foie gras. Our favorite, hands-down, was pan-seared with mango and passion fruit reduction. The more unique, but less tasty preparation—called bon-bons—was wrapped in a ball of spaghetti-cut potato and deep fried.

We followed this with two entrees, both of which were fine, but less than memorable. These were a sautéed lobster with spiced lobster reduction sauce and a vegetable medley, and Venison Dianne with vegetables. On our server’s recommendations, we had glasses of Loberger Alsace gewürztraminer (rather than sauterne) with the foie gras and, in an attempt to bridge our two very different entrees, a Chateauneuf de Pape. The service was very friendly and personalized. The food, meanwhile, (other than the seared fois gras) was less than memorable and the wine suggestions competent.

2022. Prime 112 is an upscale steakhouse with a broad range of dishes to suit all tastes. Our very good dinner consisted of sesame-crusted Hawaiian Big Eye Tuna with cocoa-ginger rice ball and Wasabi sweet and sour soy sauce; Colorado lamb rack; and scalloped parmesan potatoes. With this, a decent bottle of 2019 Resonance Pinot Noir and with the lamb, a glass of 2018 Hall Cabernet. A very good, if very pricy meal.

2022. MC Kitchen is one of many upscale Design District restaurants where we had three lunch dishes (and too much food). Although we were less excited by the levels of vinegar and citrus in the appropriately-described tuna crudo (with fennel, grapefruit, frisee, crispy quinoa, and ginger-citrus vinaigrette), we were very impressed by two other dishes. The flavors blended very nicely in the Fiocchi pasta with roasted pear, rohiola, grana padrana and taleggio cheeses and white truffle cream. Equally good (although somewhat less refined) was a black mission fig pizzetta with Cipollini marmalade, prosciutto, fontana cheese, and arugula.

The Bazaar by Jose Andres

2014. A handsome, interestingly designed room which offers an unusual combination of traditional tapas (such as Serrano ham and Manchego and shrimp) and innovative tapas such as foie gras terrine encased in cotton candy and cones filled with sea urchin cream) . For the most part, we enjoyed nine different dishes, beginning with the aforementioned foie gras with cotton candy and ending with a deconstructed key lime pie (both more gimmicky than satisfying). Filling in our meal were a number of very good dishes such as Ku Pai Ti (cones filled with shrimp, peanuts and chili sauce), sea urchin with Peruvian purple potatoes, chili foam and Peruvian popcorn; seared scallops with toasted pine nuts in sherry; and a couple of satisfying but less compelling dishes including lamb shank with fried oysters, butternut squash and lamb au jus; South Beach chips (a combination of fried yucca and plantains) with a dipping sauce of yogurt and tamarind. All of this with a bottle of Unica Riserva Rioja, served by a knowledgeable and helpful, but only occasionally present server. Overall, it was a very satisfying dining experience.

2012. At this popular, upscale, Florida seafood chain. Tom ordered stone crab claws.  Joyce had shrimp and crab grits with bacon and corn. While the bacon and corn added nice taste and texture, the crab was very tough to detect and the grits had a bit too much cheese for our tastes. But, with the activity, live music, conversation and a nice bottle of Duckhorn Sauvignon Blanc, all was well.

2012. This southern restaurant’s reputation and fortunes were justly made on the basis of its fried chicken. It was crispy on the outside, juicy on the inside and delicious all the way through. We were equally pleased with our two other dishes: deviled eggs and shrimp and grits with plump prawns, gracefully restrained grits (after the cheese-laden grits we had at Truluck’s) and a deliciously innovative, slightly sweetish, pork-based sauce with crisp shards of Virginia ham. Our server was personable and helpful.

2022. This upscale Japanese-themed izakaya restaurant is located in the lovely Epic Hotel, which is squeezed between the glamorous condos and yachts along the ritziest branch of the Miami River. While the restaurant offers a wide range of interesting sushi, robato grill and tempura dishes, we limited ourselves to four small plates: white miso soup; prawn and black cod dumplings; rock shrimp tempura; and best of all, sea bass sashimi with a slightly spiced olive oil. While the food, service and atmosphere were all very good, izakaya fare is becoming so common that it is hard to find too much unique. That being said, our limited appetites, desire to sample a number of small plates, and attempt at consensus among dishes in which we were both interested, kept us from trying some of the more interesting (such as fried fish roe) and larger (such as the rice and mushroom hot pot) dishes. Although we were severely tempted by the parade of attractive and interesting dishes being brought out to other diners, we decided to restrain ourselves in anticipation of dinner.