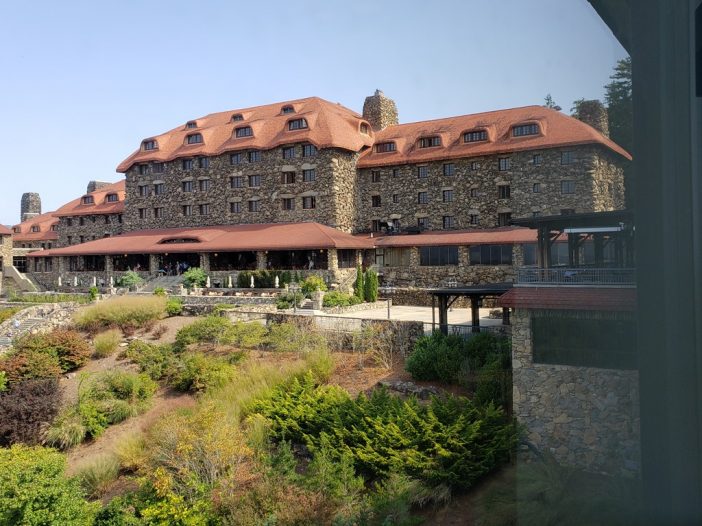 Asheville was little more than a mountain crossroad before 19th-century doctors began to recommend the climate and the mineral springs for people suffering from tuberculosis and other maladies. The region rapidly began attracting wealthy visitors both for health treatments and to enjoy the area’s scenic beauty.

George Vanderbilt, grandson of shipping and railroad magnate Cornelius Vanderbilt, came and ended up building the private Biltmore Estate in 1895. The structure was designed after Loire Valley chateaux, was the largest private home in the country at that time. Its gardens, lawns, and forests, designed by Frederick Law Olmstead, remain timeless. And in case you are wondering, it is a mere 178,926 sq ft. Although privately owned, one can visit the estate and its many buildings and gardens.

Huge estates such as Biltmore require thousands of artisans, craftsmen, laborers, gardeners, foresters, chefs, cooks, butlers, and maids to build and maintain the site. Biltmore also wanted to maintain a pleasant-looking entry to the estate. He, therefore, killed two birds with one stone by creating Biltmore Village, a self-contained, architecturally interesting community to house these workers. Today, these historic buildings house not only Biltmore staff but many others, not to speak of shops, restaurants and this being Asheville, art galleries and breweries.

Meanwhile, Edwin Wiley (E.W.) Grove used part of the fortune he accumulated from selling medicines to build the massive, luxurious Grove Park Inn from stone. It lobby is decorated almost totally in Arts and Crafts school furniture and accessories and is framed between two massive fireplaces that are larger than many homes. The hotel has since been expanded with two huge wings, dramatic landscaping and a lovely golf course, designated a national historic site and acquired by Omni (becoming the Omni Grove Park). Adjoining the resort is Groveland Village, which houses two museums, a restaurant, and a large wonderful gallery. It is lined with outdoor sculptures. An upscale neighborhood of large Georgian and Tudor homes surrounds the Grove.

The community’s growth and optimism led to great popularity among the nations’ most renowned rich and famous—including industrialists like Henry Ford and Thomas Edison, artists including Robert Motherwell and Robert Rauschenberg, intellectuals like Buckminster Fuller, Josef Albers, and all manner of political leaders. Writers were particularly well represented. Thomas Wolfe was born and lived here. F. Scott Fitzgerald partied, here, Edgar Allan Poe wrote here as did O. Henry, who choose to live and be buried in Ashland.

All of this, combined with a growth in the area’s textile and furniture manufacturing industries—not to speak of the 1920s’ stock market boom led to a growth frenzy with debt-financed civic improvements and dozens of showplace commercial and government buildings (many in the then fashionable Art Deco style) including what was then North Carolina’s tallest building, the 13-story Jackson Building and the Grove Arcade, a dramatic, enclosed, Victorian shopping center which occupied an entire city block. This structure attracted a who’s who of luxury and upmarket stores.

Unfortunately, the Depression ended all such expectations and left the region saddled with debt that took decades of frugality to pay off.

This post-Depression frugality, ironically, helped lead to the current resurgence in the city’s fortunes. Since the city didn’t have the resources to demolish and rebuild during the mid-20th century urban renewal frenzy, its historic buildings remained and were later renovated and rejuvenated, contributing to the city’s charm. Many of these, including the First Baptist Church (1927), Buncombe County Courthouse (1928), City Building (1928), Jackson Building (1924), S&W Cafeteria (1928), Bon Marche Building (1927) and Grove Arcade (1929) are included in the city’s Architectural Tours.

The city is about more than the preservation of the old. It is now enjoying something of a second Renaissance that is largely attributable to its location at the terminus of the Blue Ridge Parkway and the entrance to the Great Smoky National Park. This location, combined with the city’s charm, makes it a convenient stopping point. And since there is a ready supply of tourists, a number of businesses have popped up to capitalize. These include not only hotels and restaurants, but also breweries, wineries, distilleries, and bars. Art, however, is probably the city’s most famous of the city’s tourist service. The city has become such an important art community that a number of people come—or stay–primarily because of its art.

The downtown area, especially along Broadway and Biltmore Avenues, contains some of the largest, most notable galleries—places such as Momentum, Ariel, Haan, Benjamin Wall, and the Center for Crafts. These streets are virtually an endless chain of galleries and restaurants—with the Asheville Art Museum right in the middle. Other large, important galleries are located in Biltmore Village (New Morning Gallery and the Southern Highland Craft Guild) and Groveland Village (Groveland Gallery).

Most noteworthy, however, is the River Arts District (RAD), a stretch between the French Broad River and railroad yards that used to house dozens of mills, factories, and warehouses. After a 1916 flood, the buildings sat empty and decaying until the beginning of the city’s 1970’s renaissance when businessman Bill Goacher and his wife acquired a number of properties and began opportunistically renting them at very low prices to local artists who could no longer afford increasing downtown rents. The artists not only established their own studios but also began decorating the buildings by painting murals all over the exterior walls and by hanging their own works in the building’s common areas.

By the 1980s, a few companies began buying the buildings with the express intent of creating studio buildings and offering mentoring and financing services. RAD now consists of about three dozen buildings that house hundreds of artists who work in media ranging from metal to digital photographs, oil painting to leather, and natural fibers to tattoos. Scattered among the studies and galleries are restaurants, cafes, breweries, bars, and music venues that keep the community hopping well into the nights. And speaking of art (not to speak of food), the Omni Grove Park Inn is home to the annual National Gingerbread House Competition.

Dozens of breweries (not to speak of a few wineries and distilleries) are scattered throughout the city, in the River Arts District and especially in the Brewery District along with Coxe, Banks, and Buxton Avenues. Many of these have large outdoor entertainment areas and live music. Interspersed among them are casual restaurants and video game arcades. And speaking of music, the city is known for its live music which can be found in bars, breweries, specialized venues (such as the Isis and Asheville Music Halls and the Orange Peel) and around weekends, in the form of buskers who entertain for tips in parks and street corners.

We were able to sample food at several restaurants during our visit.