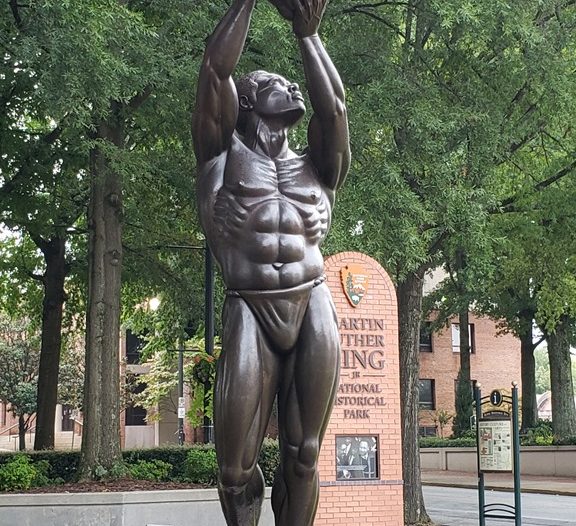 Atlanta is the capital of Georgia. The original indigenous inhabitants were forced out in 1821 and settlers moved into the area the following year. But Atlanta didn’t grow until 1836 when the state built the terminus of the Western and Atlantic Railroad here. The city rapidly grew as multiple railroads converged in the area. Atlanta burned to the ground in 1864 during Sherman’s march to the sea. However, it rose from the ashes and quickly became an important commercial center of the south.

Martin Luther King Jr., David Abernathy, and others organized the civil rights movement in the 1950s and 60s from the Atlanta area. Atlanta upgraded much of its infrastructure for its hosting of the 1996 Summer Olympics. Today its diverse economy includes aerospace, transportation, medical services, and film and television production.

It is also the home of the Jimmy Carter Presidential Library and Museum. The museum contains millions of historical materials and photographs/videos from the Carter presidency. And for those Coca Cola fans, one can tour The World of Coca Cola.

Unfortunately, the Visitor Center and other buildings in the Martin Luther King, Jr. National Historical Park were closed when we visited. That didn’t stop us from visiting some of the park’s buildings and memorials from the outside. Many offered virtual tours of their inside via QR codes. Among the many sites were the:

The MLK birth house and much of the rest of the historical site are located on Auburn Street. Most of the street developed as a middle-class White street in the late 19th and early 20th centuries, other than for a block of working-class shotgun houses (one room wide with a hallway running down the side, by four rooms deep) that the Empire Textile Company built and rented to its laborers. But within two years of the socio-political race riots of 1908, 80 percent of the Whites had left and Blacks, including King’s maternal grandparents, moved in. Except for the one side of the block that working-class Blacks occupied, most of the neighborhood were middle-class professionals. The neighborhood fared quite well through the first half of the century, becoming the richest Black street in America.

MLK’s legacy did not die when he was murdered. While only one granddaughter followed her male ancestors into the ministry, many other of the children and grandchildren continue to be involved in some aspects of the civil and human rights movements.

The National Center for Civil and Human Rights is a museum that focuses on the U.S. Civil Rights Movement and has a smaller section on worldwide human rights.

The U.S. Civil Rights section begins with the story of the South’s Civil Rights struggle by profiling and playing ugly broadcasts of speeches of leading segregationists including Lester Maddox, James Eastland, and George Wallace. It then shows the struggle through a series of interpretive panels and even uglier videos, such as those of Birmingham’s Bull Connor’s police vicious dogs on peaceful protesters, and horse-mounted police on marchers trying to cross the city’s John Pettis Bridge. It explained Jim Crow laws, the Emmitt Till murder, a picture of soldiers escorting a terrified, young Ruby Bridges into a New Orleans White elementary school. It details how these and other atrocities helped mobilize public opinion against the segregationists.

While the museum talked about Atlanta’s racial problems, it emphasized how the city’s more conciliatory approach led to the election of more moderate mayors and councilmen. The city worked with local business leaders (especially Coca-Cola) and Black leaders to enact policies that were not only more conciliatory than most other Southern cities and states, but also those in its own state of Georgia.

The museum explained the success of the integration struggle including:

While these and many other successes didn’t solve the South’s “race problem”, they continually chipped away at some of the most pernicious practices.

Then came the shocking April 4, 1968 assassination of Martin Luther King at Memphis’ Lorraine Motel and the questions that surrounded the role James Earl Ray played.

This same story, or at least parts of it, have been and continue to be told into several other venues that we have been to or have watched, such as at the Lorraine Motel, the Smithsonian Institution’s African-American Museum, and Ken Burn’s PBS Civil Rights documentary. However, we were unfamiliar with some parts of the story.

The museum’s Human Rights section begins with a list and thumbnail overview of human rights movements in countries ranging from China, Russia, and Cuba, to Poland, East Germany, and Tibet, to Argentina, Iran, and the Philippines. And then, of course, there is the United States’ struggles for farm workers, civil and women’s rights.

It then highlights a Wall of Shame: the role of some of the worst offenders of the modern Era. Highlighted mass abusers include Stalin, Hitler, Mao, Augusto Pinochet (Chile), Idi Amin (Uganda), and Pol Pot (Cambodia). It discusses the first systematic efforts to bring violators to justice in the post-WWII Nuremberg Tribunals to the few scattered successes of the World Court. However, the vast majority of abusers have never been called to account. It then highlights countries that currently face the greatest risk of mass murders, including Somalia, Sudan, Afghanistan, Pakistan, and Syria,  A wall-sized global map labels countries as free, partially free, and not free. It was a chilling reminder of the large portion of the world population that lack access to the 30 demonstrable measures of human rights.

And what are the 30 rights? They are divided into three categories:

It specifically highlights the double-edged sword of technology in human rights—a combination of capabilities that can, on one hand, expose abuses and facilitate the ability to organize against oppression; and on the other hand to spy on, harass, censor, and manipulate people via exposure to false information.

The display provides a counterpoint to the Wall of Shame by highlighting the tireless work by several individuals and organizations around the world to expand or prevent the loss of rights. It also highlights a number of current rights struggles that are still being waged in the U.S. including those around LBGTQ, women, racial, voter and public education rights as well as the tradeoffs between national security and human rights.

We also walked through Olympic Park which contains open spaces and mementos of the 1996 Olympics. We found no mention of the Centennial Park bombing in the park, although this may have possibly been in the park’s Visitor Center which was closed during our visit

We didn’t expect much of the Atlanta restaurants. Boy were we wrong. We ate in two restaurants that were the probably the best of our entire trip, and easily match the food of most of the New York and San Francisco restaurants in which we have eaten.

Poor Calvin’s is a midtown restaurant that focuses on generally southern food with a creative Asian twist. All three of our dishes were excellent, as was the very professional, yet very friendly service. Our meal began with lightly battered and fried buttermilk-fried frog legs appetizer that were juicy and tender and served with a Thai curry dipping sauce.

Our two entrees were as well conceived and prepared and even more interesting:

While the wine list was limited, we found a wonderful 2018 Soter North Valley Pinot Noir at about 1.6x retail markup versus the normal 2x restaurant markup. The scotch and bourbon lists were selective, unusual, and for the most part, very reasonably priced. They only offered two brands of single-malt scotches—Macallam and The Balvenie—but for each, they offered at least three kinds ranging from 12 to 35 years. The bourbon list was dominated by very rare Pappy Van Winkles, ranging from 10 to 35 years. Tom chose a 15 year (for a “mere” $80 an ounce) which they served straight up along with a glass with one large ice cube. While it tipped the scales at 107 proof, it was incredibly complex and smooth with a velvety finish. It was a great treat—and on top of the wonderful and reasonably priced meal, was a perfect dining experience. One that we have seldom equaled anywhere in the world. One heck of a surprise and a wonderful way of celebrating the last meal of our trip.

In contrast to Poor Calvin’s, Nam Thai was “merely” excellent. Even its most common dishes at this Thai restaurant have unusual twists. We shared three very interesting and delicious dishes. We began with Thai shrimp and chicken dumplings with Thai chili, crispy garlic, and galangal soy dipping sauce. This was followed by two entrees:

Our only qualm was with the minimalist, less than inspired wine list (which we have found at almost all of the restaurants we have visited south of Washington D.C.We ended up with a passable 2019 Gunlach Bundschu Gewürztraminer.

Ray’s In The City

We also had a rather disappointing (in comparison) pricy lunch at Ray’s In The City. The seafood gumbo was tasty and contained the okra and rice. But we found no evidence of the andouille sausage, oysters, crab, and shrimp that were advertised to be in the gumbo. Meanwhile, the jumbo lump crab cake with creole mustard beurre blanc and roasted corn relish was tasty but had more filler than suggested by the server. The New Orleans BBQ shrimp with BBQ butter topped with crispy leeks was very good even without the dense boursin grits cake.