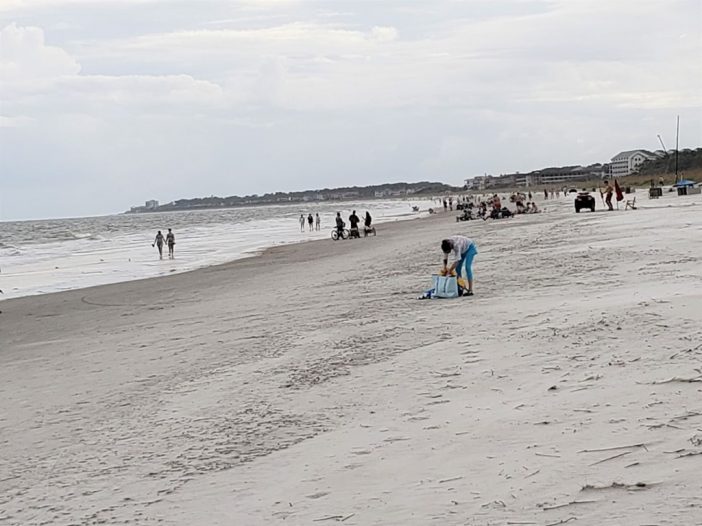 At 69 square miles, Hilton Head South Carolina is the second largest barrier island on the U.S east coast next to Long Island. It has 28,000 acres of land and 2,000 acres of salt marshes. Of greater interest to most tourists, it has 13 miles of beaches, 23 golf courses (plus 22 others nearby), and more than 100 miles of bike and walking paths. Leisure activities abound, including golf, tennis, horseback riding, fishing, crabbing, shrimping, shopping, and water sport opportunities. And then there are always the time-tested days of relaxing around your hotel’s beach, pools, hot tubs, cafes, and bars.

There’s More To Hilton Head Than Beaches and Golf

We have nothing against these activities, but such activities are not a draw for us. Yet, with so many people telling us this was one of their favorite places to go, we decided to spend a day (and night) here for a fast exploration with the idea of returning at a later date to spend more time if we chose to do so.

For this initial trip, we focused on the more educational and cultural side of Hilton Head including its:

We stopped at many of the most suggested parts of the island including:

We spent several hours at the Coastal Discovery Museum, an affiliate of the Smithsonian Institution. This wonderful, expansive (64 acre) multi-faceted facility tells the history and highlights the unique character and ecosystem of the southern barrier island in general and of Hilton Head in particular.

The Discovery House is the museum’s centerpiece. During our visit, two rooms exhibited panels that explain how barrier islands are formed, and how they are continually reformed and eroded by hundreds and thousands of years of longshore waves that hit shorelines at an angle. These waves continually deposit and sweep away sand, sediment, and nutrients from the sea to the land. Periodic hurricanes (and especially that of 1940) re-scramble the contours of the roughly 18,000-year-old island and its ecosystem.

The Flora and animals also continually change. Salt, sand, and winds continually buffet the island’s flora. Animals live in ecosystems that range from salt marshes to sand dunes to forests.

And not to be left out, the island’s people and their cultures have also evolved. Native Americans gave way to early European settlers, plantation owners, and dozens of generations of enslaved Africans and their ancestors. Then came the Federal military’s role in freeing, educating, and providing land to the formerly enslaved people at in the early days of the Civil War.

Panels explained how the relative isolation gave rise to the Gullah culture of African slaves that created their own entirely new language and culture. The English language, customs, and tools reshaped the Gullah, and the occupants adopted and adapted local materials and foods.

The museum also examined the evolution of the island’s plantations, the relative roles of indigo and cotton, and the role of enslaved people. Plantations utilized the “task system” where enslaved people worked on specific tasks. Not only did this increase productivity, but enslaved people could also grow some of their own food, make their own goods, and earn their own money. It discussed the early end of slavery in this area due to the early Federal capture of Hilton Head, Beaufort, and neighboring areas, and how freed slaves had access to education and land ownership. Newly freed men enlisted into the Union army and valiantly fought for their own independence. Reconstruction helped the newly freed people. While reconstruction lasted longer here than in most of the south, even here, Jim Crow laws and vigilantes like the Ku Klux Klan and the Red Shirts managed to strip away many won rights.

In the early 20th century, wealthy northerners bought large pieces of the island for their own personal vacation and hunting grounds. In 1949, Fred Hack and Joseph Frazier formed the Hilton Head Company to acquire about two-thirds of the island initially to cut and sell the lumber. Joseph’s son Charles built the Sea Pine Resort in an effort to balance profit with the preservation of the natural environment. Widespread development was jumpstarted when the first bridge from the mainland to the island was built.

The Discovery House, however, does much more than explain the island’s history. It also has displays of the island’s natural environment and artifacts. It also displays local artists’ work.

Taking it to the Outside

The center also makes good use of the 63 acres surrounding the Discovery House. Its Discovery Lab provides children and adults the opportunity to see and learn about the area’s baby animals. A butterfly garden gives visitors the ability to walk among butterflies. Boardwalks take you out into the tidal flats to see everything from osprey to oysters to fiddler crabs. One can explore gardens of carnivorous plants, camellias, herbs, and grapes, an oyster boardwalk, beehives, farmhouse, animal barns, and much more. The center also sponsors numerous educational presentations, classes, and walks. It has relationships with other educational firms such as those that provide historical and Gullah tours of the island.

This is a wonderful resource for learning about the real Hilton Head islands, beyond the resorts, beaches, and golf courses.

Although the island is known more for its sybaritic pursuits than for its history, it does have a history from more than 1400 years of native American habitation and its 1520 exploration by Spanish conquistadors. Captain William Hilton’s 1663 scouting trip led to the creation of its Sea Island plantations which operated until the plantations were abandoned in the face of an impending Union takeover. After the war, the island’s population fell to about 3,000, and then down to 1,000 by 1940. Growth did not resume until the 1950 introduction of electricity and the 1956 completion of a bridge to the mainland. Thus came the birth of the current tourist incarnation of the island.

We mostly focused on the time period between the creation of the plantations and the mid-20th century—the period when the island’s Gullah culture took root and began to manifest into its current form.

The period of greatest change came during the Civil War and Reconstruction. While the Confederacy built a fort to protect the island’s port, it was captured by the Union and became a magnet for Union troops, missionaries, and thousands of newly freed enslaved people. The island has several sites from this time period that are worth visiting.

And of course, we had to check out some eating places.