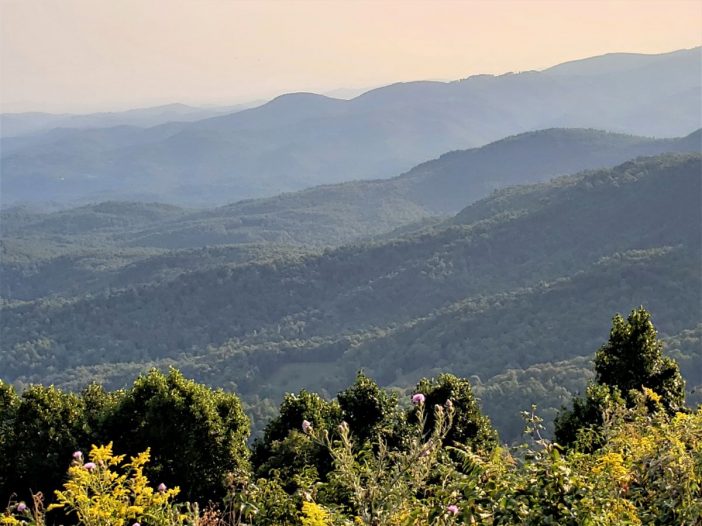 The Civilian Conservation Corps built the roughly 400 miles Blue Ridge Parkway during the Depression. The road connects Virginia’s Shenandoah National Park with the Great Smoky National Park in North Carolina. It takes a long time to drive the entire parkway. Fortunately, it has a lot of entrances and exits, allowing one to travel the miles as quickly or as slowly as you want.

We entered the road in Lexington Virginia making a number of stops in and near the park. We primarily drove along the parkway, but sometimes took local roads and even Interstates where segments of the parkway were temporarily closed or to significantly reduce driving times between stops. Here are some of our most interesting stops.

Built in 1868 under the direction of Robert E. Lee, the chapel is on the campus of Lexington’s Washington and Lee University in Lexington Virginia. The Victorian-style building is strikingly different from the Georgian university. Although the chapel and museum were both closed when we visited due to Covid, it is supposed to preserve Lee’s office as it was at the time of his death. Behind the chapel is the grave of Traveler, Lee’s favorite horse.

This Virginia state park is home to a 215-foot limestone arch that crosses the pretty Cedar Creek. George Washington originally surveyed it. Thomas Jefferson purchased the property and built a guest cabin to allow his guests to enjoy what the neighboring Indians called the Bridge of God. In the 19th century, it was considered one of the premier natural sites in the eastern U.S., along with Niagara Falls. The creek itself is surrounded by tall rock walls, all of which are accessible by going down (and back up) about 150 stairs. The visitor center shows an interesting series of drawings that show the arch’s erosion from 1839 to the present.

Washington was born a slave on the plantation where this monument now stands in Hardy Virginia. He was 9 when the Civil War ended slavery and gave him and his family freedom.  The museum focuses on his relentless quest to get an education. He learned to read on his own. He walked 500 miles to go to Hampton Institute where he served as a janitor to pay for his tuition. He graduated with honors in three years and ended up teaching at Hampton before receiving an offer to become the principal of Alabama’s Tuskegee Normal and Industrial Institute which trained African Americans for work in agriculture and industry. Growing the school required relentless fund-raising and public speaking which brought him national attention. He became an advisor to President Theodore Roosevelt and was recognized with honorary degrees from schools including Harvard and Dartmouth. Exhibits and introductory videos tell his story. The Plantation Trail provides a guided walk through crops, farms, and reconstructed 19th-century buildings. It, however, avoids the famous controversy between Washington’s advocacy of agricultural and industrial training for African-Americans and W.E.B DuBois advocacy of academic education.

The Mabrys built and operated the mill from 1910 to the 1930s when large scale companies eliminated the need for small mills. The mill ground corn and buckwheat. When the rains were sufficient, the mill also powered a circular saw for lumber. The Mabrys also operated a blacksmith shop to produce rims and attachments for wagons and local farms and an onsite woodworking shop to transform their lumber into wheel rims and spokes.

Although the scenic mill is located on a small stream, it required supplemental water delivered through a set of flumes from nearby streams. A number of period buildings and equipment are arranged around the mill and blacksmith and woodworking shops. These included:

The mill also has a restaurant serving local food where we enjoyed—and we do mean enjoyed—two dishes.

Both were very good and provided too much food to eat all for an incredibly reasonably priced ($35 total with including two iced teas, tax and tip). Moreover, the service was fast, efficient, and friendly. It is an excellent lunch spot on the parkway. Expect a wait during busy times.

The Center is home to the Roots of American Music Museum and stages daily performances of Blue Ridge mountain music. The museum traces the history of this music from the amalgam of African banjo, European violin music, bluegrass, gospel, and ballads with traditional Scotch fiddling, German harmonic singing, and African banjo rhythms.

This music was initially spread through a combination of regional religious singling groups, traveling music and minstrel shows, African circuses, and blackface performers. The music spread to a national audience through a combination of low-cost instruments (from volume manufacturing and mail-order sales) and especially phonograph records and radio. It was revolutionized by the invention of American guitars which are relatively easy to create simple background music for singers, but difficult to play well. This all led to the popularity of a number of family and barbershop groups and nationally known performers including Flatt and Scruggs and Charlie Parker.

Although this music was (and continues through a recent revival) to be popular in and of itself, it played a much bigger role as a foundation for dozens of other American music styles including country, jazz, blues, bluegrass, and rock and roll.

The museum plays clips of several types and examples of Blue Ridge mountain music and even allows you to mix your own. During the summer and fall seasons, it also has daily concerts and casual performances from noon to 4:00.

Jeffries Park was a good place to stop for a short, scenic, one-mile walk along the Cascades loop trail It goes along Falls Creek through a mixed hardwood forest and rhododendron groves. It goes down (not to speak of up) several dozen irregular stone steps to two overlooks. While both are lovely, the bottom lookout point is more dramatic with water steaming out over the edges and down the sides of the rocky cliff sides.

Boone is a college town named after Daniel Boone. It was a convenient place for us to stop for the night and to have dinner.  This scenic 17,000-person city is home to Appalachian State University. It has a number of casual restaurants, but we decided to take a 15 minute drive up a mountain to eat at a more upscale restaurant.

Gamekeeper Restaurant specializes in farm-raised, grass-fed game dishes. Its menu includes emu, elk, “anteloaf” (antelope meatloaf) as well as more common meats such as bison, beef tenderloin rack of lamb, and duck breast. For non-meat eaters, it also has a couple of fish dishes. We had grilled fillet of emu with sun-dried tomato jus and grilled hanging tenderloin of bison with horseradish and green onion sour cream. Both came with mashed potatoes and a mix of lightly steamed vegetables (carrots, squash, green beans, cauliflower, and kale). Based on our sommelier’s recommendation, we had a 2019 Rickety Bridge Pinotage from South Africa. Its upfront red fruit with blueberry and spice and subdued tannins went very well with our dishes.

The park is built around a turn of the 20th century estate built by a textile company owner who donated it to the National Park Service upon his death. The 14,000 sq ft house now contains a small local crafts center. The grounds has several miles of scenic trails.

This park is on a 5,946-foot mountain is accessible via a mile road to the summit and trails. When we arrived we discovered that admission was by reservation only (which we did not know about). Even if we could have gotten in, we would have had a hard time justifying the $44 cost for the two of us to drive the 2-mile road and hike the mountain. We passed.

Linville Falls has two major trails, one on either side of the Linville River. Each trail branches off into smaller spurs to different views of the falls. We took both trails and went to five of the six overlook spurs. The longer of the two trails (1.7 miles round trip) had especially pretty views from the Upper Falls. The Chimney view provided lovely views of the gorge and two different waterfalls and the surrounding landscape.

From the trailhead on the other side of the river, we took only one of the two spurs, to the Plunge Basin Overlook, which was probably the second-best view via a shorter (1 mile) spur with more roots, rocks, and steep irregular rock steps to navigate. But it was definitely worth the effort.

The museum provides samples and discusses the history, properties and uses of the state’s rocks and minerals.

With its 6,684-foot summit, Mount Mitchell is the highest east of the Mississippi. It has a museum, interpretive center, and several trails from near the top of the mountain. The visitor center explained the history of the Appalachians (which 250 million years ago, were probably taller than today’s Himalayas), the region’s flora and fauna, and how acid rain and ozone-damaging pollutants such as gasoline and how pesticide fumes are particularly dangerous to high-altitude ecosystems.

Unfortunately, we were not there when rhododendron and wildflowers were in bloom. Still, the parkway views were spectacular.

The Southern Highlands Crafts Guild founded the Fold Art Center in 1890. It is the longest operating crafts shop in the country. We began with a walk-through of this shop that had an impressive array of high-quality crafts genres and media. The upstairs exhibition of works from the permanent collection was even more impressive. It included wood carvings, basketry, natural materials, furniture, rugs, clothing, ceramics, dolls, and Frank Caracci’s complex circus creations. Just as impressive was a temporary exhibition of a wide range of Black and White crafts.

The visitor’s center offers exhibits and a 24-minute film (which was not operating during our visit) that explains the history and construction of the park. The exhibits explain Civilian Conservation Corps and Works Progress Administration’s 52-year construction project. It began during the depression as a means of addressing unemployment (employing 3 million men or 5% of the country’s male population), spurring the development of the Appalachian region, and of making nature and the country’s scenic beauty more accessible to the people.

And this does not even include the dozens of viewpoints along the parkway or the many lovely mountain vistas that can be seen while driving the parkway. Definitely a pretty place to explore. Take your time and enjoy