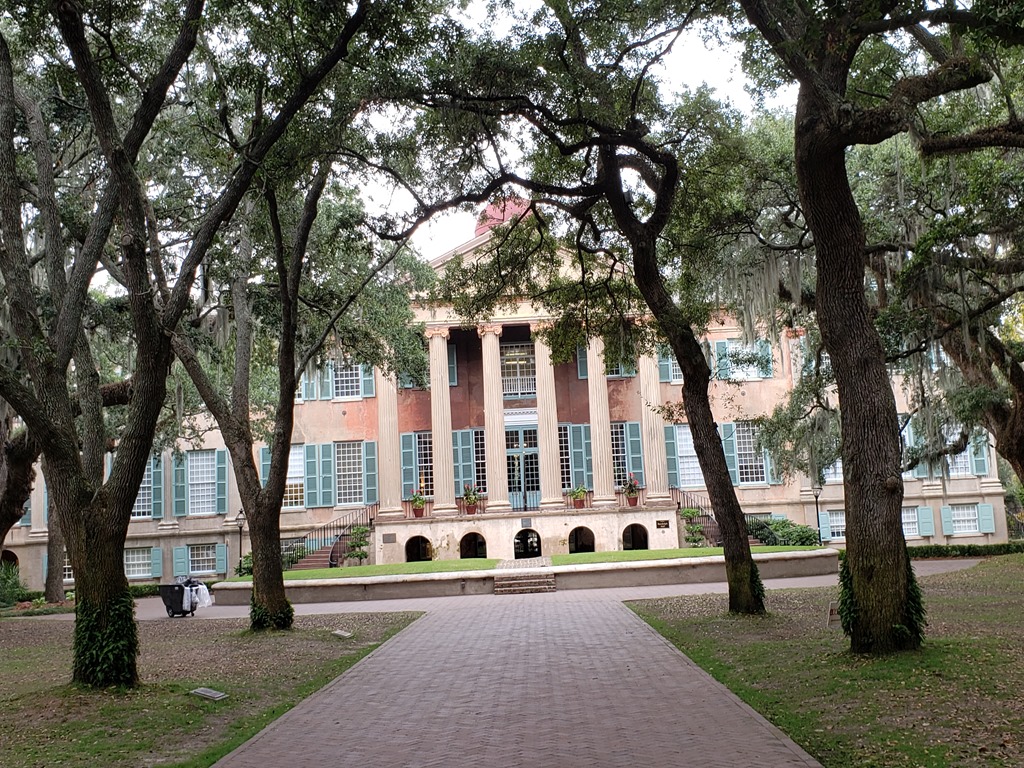 Although we have long been drawn to Charleston’s beauty and history, we have been equally enchanted by many of the city’s restaurants.

SNOB remains one of our favorite restaurants in Charleston. In 2021, we both had 3-course meals so that we could get a wide range of tastes. The appetizer of burrata and prosciutto with arugula salad was hands-down more interesting than the butternut squash bisque. The rack of New Zealand lamb with rosemary reduction and the shrimp and grits were quite good. Also good were the desserts of pot de crème an crème brulee. Our wine was a pleasant 2019 Cotes du Rhone “Petite Ours” from Matthieu Barret.

On a previous trip, we each had 2 dishes. Joyce’s steamed littlenecks clams in white wine sauce were quite salty. While she preferred her shrimp and grits to those she had at Husk, Tom that that the tomato sauce overpowered the delicate taste. He began with a semi-boneless Carolina quail stuffed with lemon-Rosemary sausage and a blueberry gastrique, which he loved. He was also happy that he ventured for the unusual sounding BBQ tuna (with an interesting ham butter, honey-mustard glaze and sauce), topped with fried oysters and green onion.  We finished off with a very nice peach cobbler with vanilla bean ice cream.

We shared three dishes. We began with a scallop ceviche which was not sufficiently marinated nor had enough liquid. Next was the best dish of the evening: creole-fried oysters with herb garlic butter. We ended with cashew-crusted grouper with roasted fingerling potatoes and green beans in a cilantro pesto cream that overwhelmed the delicate fish.

McCready’s is generally viewed as Charleston’s best restaurant. We shared three dishes: cold crab salad with sorrel yuzo pole beans and sour green plums; beef tartare with sous vide egg yolk and white anchovies tarragon sauce topped with onion rings; and seared grouper with smoked Armenian cucumbers, kale, a sauce made from buttermilk whey, topped with a robin acid bathed buttermilk curds. Although each of the dishes was fascinatingly complex and very well executed and presented, we felt that the chef’s extensive use of sour and acid in these dishes to be distracting. Potentially great dishes became very interesting but less than memorable.

Our lunch began with wood-fired bacon hushpuppies with nettles pickled garlic and pepper mayonnaise and pan-roasted cornbread with bacon. While Joyce who is the hushpuppies fan of the family generally enjoyed these, neither of us appreciated the cornbread, which was dry and had little taste, other than the smokiness of the burnt bottom. However, we both enjoyed the entrees: shrimp and Edisto grits with roasted peppers and onions, ham sausage and tomato emulsion; and bone-lickin’ peach BBQ pork ribs with “hoppinjohn” rice, field peas, and kale. Nice low-country cooking.

We tried this popular institution with middling results. The good news is that the she-crab soup (especially after a few drops of Tabasco Sauce), along with our sides of mac n cheese and mashed sweet potato were very good. The fried chicken (which we had in a combination dish with St. Louis ribs with blackstrap molasses BBQ sauce) was also good. The ribs, while pretty good, would have been enhanced with more sauce. The shrimp and cheese grits (with mushrooms, scallions and bacon), however, were a huge disappointment, almost totally lacking in taste. The meal, however, ended on a high note with pecan pie that substituted chopped pecans for much of the syrup, resulting in a dessert that is sweeter than those we are used to but very good. The service was friendly and professional.

We had a mediocre meal at this expensive, supposedly top-ranked seafood restaurant. We started with small, non-descript fried oysters with a very nice combination of sweet corn, blue cheese vinaigrette, and pickled okra. The next dish of tiny mussels in cream, white wine, and garlic was not great, but OK. Then we had a passable sautéed flounder with lump crab, asparagus salad, roasted tomatoes, and chervil. The wine was a crisp 2019 Leflaut de Milly Chablis. For the price, we will not return.

We had two rather disappointing lunch dishes here. The pulled pork sandwich with vinegar BBQ sauce, blue cheese, and pickles on a nice sweet Hawaiian bun was very vinegary. The pimento cheese BLT on wheat toast had too much pimento and not enough BL or T.

We had 2 very good dishes at this local Charleston Village cafe. Both the fried flounder with spinach, and the blueberries and blackberries salad with goat cheese and pecans were delicious.

15 Church Street. While we did not stay at this B&B (it was booked), we had an opportunity to tour the property. This will be the place we want to stay on our next trip. The place is beautifully restored and very comfortable. The on-site owners are delightful and are perfect hosts. Sit on the veranda for happy hour which includes wine, snacks, and draft beer (which changes frequently).

Barksdale Inn is a nicely restored historic place B&B that was a little more rustic. Our large room on the second floor had a fireplace, and a tall 4 poster bed on the second floor. It had an old creaky wooden floor and an old bathtub. Comfortable but not luxurious.

The Vendue is a beautifully remodeled art hotel located in the center of historic Old Town and near many of the cities primary sights and best restaurants. The roof deck has one of the most popular rooftop bars in the city and the common areas are filled with art. When we stayed here, the art theme was titled “Fluent”, which includes works by more than 30 artists, all associated with fluidity of motion. The art is formally shown in daily walking tours.