One of the best ways to get acquainted with a city is to take a walking tour. Not only do the guides take you to the relevant sites, but they also provide an in-depth look into the history. We have taken multiple walking tours of Charleston. This summarizes what we learned about Charleston’s history from our tours.

We have taken this same tour twice–and amazingly, with the same guide, Scott. He gave an excellent overview of Charleston’s fascinating history as we strolled through the city. Although we couldn’t go into buildings during Covid, we did visit inside of them on our first previous tour.

In 1663 English planters from Barbados attempted to settle in the brackish, swampy, inhospitable Charles Towne Landing site, which is about 6.5 miles from current downtown Charleston. While unsuccessful in the attempt, it laid the foundation for a 200-man English settlement (Charles Towne) by loyalists to England’s King James I at a higher, and current site in 1670.

Charles Town was the first English settlement and the seat of government for the nascent colony of South Carolina. But the area had other European settlements. The Spanish had been well established in the Floridas and all the way up to St. Helena (about 80 miles to the south of Charles Towne since 1520). The French controlled most of the area from what is now South Carolina’s western border to and slightly beyond the Mississippi River. These settlements posed security threats. So too were the threats from the area’s Sioux, Cherokee and Iroquois tribes, and from pirates who were intent on raiding the town from the sea. The English settlers were forced to build a wall (a small remnant of which is still visable) around what was then a 64-acre settlement for protection.

Since this colony was intended from the start as a money-making venture (rather than to secure religious freedom) the settlers immediately began looking for opportunities to export goods to England. They began by exporting lumber from the virgin forest that surrounded the city. They also began planting cash crops that they thought would grow in the area. Among their attempts were:

All of these crops were very labor intensive, And since English labor was too expensive and European workers quickly died from the heat and disease, they turned to much less expensive labor that was used to working in the heat and humidity—slaves from Western Africa. Slavery became the foundation of the entire Southern economy in general and of Charles Towne (renamed Charleston in 1783 at the end of the American Revolution). Slaves not only funded the growth of the wealthiest city in the country, but they also built it. They created streets by laying the cobblestones from ballast that came from the 500 ships per year that sailed into the port. They also literally left their fingerprints in virtually all of its buildings in the form of “slave bricks” (porous, handmade bricks that still contain the fingerprints of the slaves who made them).

While plantation owners initially bought slaves through middlemen, they quickly recognized the advantages of “disintermediating” the middlemen. They established formal and informal slave marts all throughout the city and the state, with a mart in virtually every neighborhood and every village. Charleston rapidly became “slave central” for the entire southeast. An estimated 40 percent of all slaves entering the colonies came through Charleston. The combination of indigo, rice, and (later) cotton and slave trading rapidly established Charleston as the richest city in the country.

Scott then discussed how Charleston’s adoption of the “task system” (under which a slave, after completing their assigned tasks, could produce and sell their own produce and products) made its slaves the most productive in the colonies (and later in the country).

By the mid-19th century, however, the abolitionist movement had begun to take hold, including in the south. Harriet Beecher Stowe’s Uncle Tom’s Cabin (which rapidly became the second best-selling book in the world after the Bible) mobilized public opinion. The state made a cosmetic accommodation to the movement in 1856 by limiting the sale of slaves to a limited number of slave marts (one within a four-mile radius). Slaves, however, continued to be sold in the city until February 4, 1865—13 days before the Union’s General Sherman marched into the city.

The tour also explained the physical evolution of the city and the role of some of its oldest and most historic buildings in the city’s history which we discuss in our Charleston’s Historic Landmarks post. The physical evolution of the city occurred over sixteen periods during which the city was expanded by reclaiming land from the sea beginning with cobblestones from ships, through the demolition of the city wall (which the city had outgrown by the 1730s), the rubble from various fires (especially the 1740 fire which destroyed two-thirds of the then wood city), the destruction of the 1776 British siege, the Civil War shelling by 48 Union ships), and then by the 1886 earthquake (estimated at 7.2) that destroyed more than 200 and required the rebuilding of more than 2,000 other buildings.

Since Charleston, and the entire south’s economy was devastated by the Civil War and the elimination of slavery, it did not have the money to repair or reconstruct the city, which ended up effectively stagnating until the New Deal of the 1930s and especially during the 1940s when the World War brought the U.S. Navy to the port.

He explained how this stagnation (not to speak of the reclamation of part of the bay) led to traditional merchant homes (in which shops operated on the ground floor and the owner’s family lived above) that had been located near the docks were reduced to tenements and bordellos, before being rehabilitated into Rainbow Row, one of the city’s most fashionable and expensive neighborhoods in which homes can sell for up to $10 million.

We then saw how traditional slave-owner homes were divided between white residences, slave quarters, and stables, and how many of the latter two have been converted into carriage houses (as on and near Tradd Street) and learned of the destructions wrought by British shells and firebombs through a brief walk past a few of mansions along the Battery.

These were just a few of the many ways our guide used specific sights as a basis for discussing broad historical issues. For example, he used the historic St. Philips Church to discuss the role of the religion in the “Holy City (so called due to its open accommodation of many different regions), the Slave Mart as the backdrop for discussing part of the multi-faceted discussion of slavery and the Nathaniel Russell Home to introduce us to the architecture of the homes and the gardens of some of Charleston’s most wealthy planters. The Dock Street Theater, meanwhile, served as a backdrop to discuss some of the city’s many firsts in the colonies and the country. These firsts included:

We also learned of:

Our tour ended inside St. Michael’s church (built in 1761), where we saw pews that cost the wealthy planters and merchants $500 per year (the equivalent of about $20,000 in current dollars), the one pew that was reserved for dignitaries and the amazing Tiffany windows.

This tour traced the history of the Civil War from the perspective of Charleston. It began with an overview of the nominating process for the 1860 election and the fragmentation in the Democratic Party (between Northern and Southern nominees) that helped ensure the election of the Republican Lincoln as president. Our guide explained how South Carolina immediately responded through a simultaneous resignation of all local federal civil officials, by claiming ownership of the not quite completed Federally-built Fort Sumter, then by shelling the barely manned fort into submission and by becoming the first state to secede.

He pointed out and explained the role of specific buildings in the subsequent war and the alarmist reaction against all blacks (including free blacks, who accounted for about 10 percent of the total) who were feared to be planning a revolt. While the South did win many of the initial eastern U.S. battles against overly cautious Union generals, the south had lost virtually all of the battles to the West (against General Grant) and by 1863, was almost bankrupt. It could not get foreign loans and it failed in its attempt to create a stable, common Confederate currency. Then, in the later years of the war, the city suffered its greatest blows. In 1863, the Union gained control of Charleston Harbor and began a 600-day bombardment that devastated large swaths of the city. By early 1865, General Sherman had captured most of the far south and was challenging the state Capitol of Columbia. The state militia, having to race to its fruitless defense, left Charleston undefended. The Union army freely entered the next day, February 18.

Some things got even worse after the war. Union soldiers looted many of the city’s remaining riches, Northern carpetbaggers imposed strict restrictions on and further looted the south.

Although our guide, clearly knew his history, his sympathies clearly lay with the north, faulting the south for its racism, its radical politics, and its totally unrealistic perception of its own strength and the ease with which it would win the war.

Despite this, he also faulted the North, especially for its duplicity regarding slavery. For example, while many in the North claimed to find the South’s approach to blacks abhorrent, many Northern banks gladly extended lines of credit to Southern banks to fund loans for people to buy slaves and Northern insurance companies wrote insurance countries on the lives of the slaves who served as collateral for the loans. Some Northern states, meanwhile, while condemning slavery, would not permit fleeing blacks to enter their states. Even the Federal government showed some duplicity, as by collecting tariffs on the goods produced by slave labor and taxes on the income of slaveholders.

Overall, it was a very interesting tour. The big problem was that the guide, so intent on providing information that he provided too much. And much of that he did provide, took far too long to explain. In the end, it took more than three hours to convey about two hours’ worth of information. Unfortunately, we would not recommend this tour.

This tour is about the history and culture of the region’s free African-Americans. The tour guide is an area native. During the tour, he teaches participants some of the Gullah language as well as talks about many Gullah customs. Although we had difficulty understanding some of what he was saying due to his accent, we did enjoy learning more about the Charlestown Gullah population. We also stopped at the workshop of Philip Simmons who is an internationally known blacksmith/ornamental gate maker. His ornamental iron works are in homes and in museums all over America. 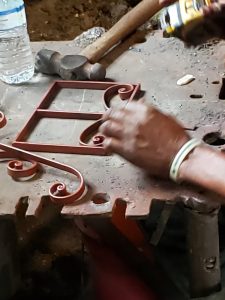