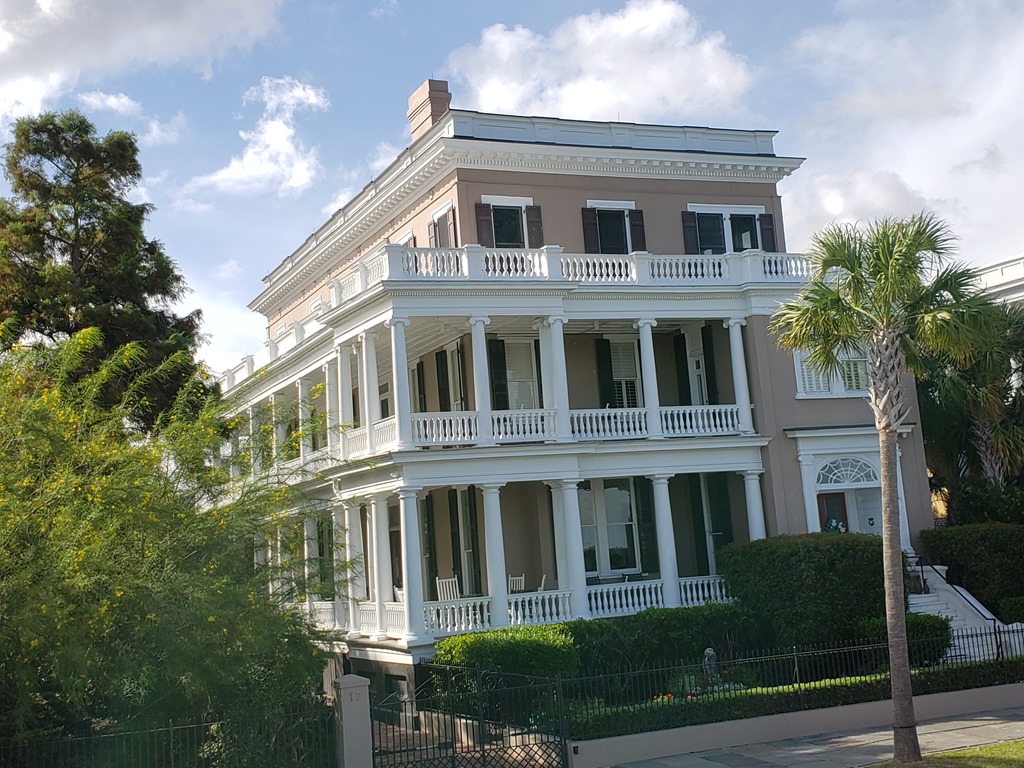 Charleston South Carolina is steeped in beauty and history.  The best way to learn about the city is to take historic tours (which we cover in a separate blog). This blog highlights some of Charlestown South Carolina’s historic sites that one can easily visit on foot.

Charleston virtually oozes history on every block. Among its dozens of historic sites are:

The tour of the building focuses on the late colonial and Revolutionary War periods. It begins with an entertaining, but too long tour of the basement dungeon, which was initially intended as a storeroom. Under the British occupation of the city, it became a prison to house everyone from common criminals to prominent patriots–including some signers of the Declaration of Independence. The first floor contains a formal meeting room and another that houses historical displays. The second floor houses the Great Hall, which housed many of the city’s most important meetings and most formal events. It was the site of the election of South Carolina’s delegates to the Constitutional Convention, of the state’s vote to ratify the Constitution and of the ball honoring the nation’s first president, George Washington.

Although such museums are extremely educational, one can also learn much just by walking the city to see the buildings in which free citizens (the vast majority of whom did not own slaves) lived, and also through tours of some of the mansions of some of the richest families (virtually all of which owned at least domestic slaves). We toured two such mansions.

The Aikens-Rhett House, while restored, is relatively bare except for some of the furniture, portraits, art, and personal possessions of the families who had actually lived in the house–especially of the state governor (who tried to keep South Carolina in the union) and his Confederate officer son-in-law (who married the governor’s daughter). It showed how the original Federalist style had been remodeled to the then fashionable fusion of neo-Classical with Grecian, Gothic, and Rococo designs and objects. The tour begins with an audio-guided walk through the slave quarters (dorm-style with different size rooms depending on the slave’s skills and status), the yards, stables, and garages (with two of the families rather dilapidated carriages), and then into the main house. We saw the double parlor and the dining room where the family entertained (with fragments of original paint and wallpaper), the bedrooms and bathrooms where they lived (including beds, metal-lined tubs and washbasins and so forth). We learned about the two stages in which the home was extended and saw some of the underlying structural elements (including some of the exposed beams and lathing). The tour ended in the family’s art gallery, which was furnished with original art and reproductions (acceptable and fashionable at the time) or classical pieces that the family actually owned. It is a very informative way to learn about the lives of one of the state’s most important families.

The Russell home, in sharp contrast to the Aiken-Rhett house, was restored as closely as possible to the way it looked under the Russell Family. Twenty-two layers of paint were stripped to identify and match the original colors including down to the gold leaf details on the living room molding and the faux lapis lazuli details in the parlor music room. The furniture was duplicated as close as possible from a family inventory, and matched with period antiques of the same description. The foundation worked with the same British company that produced the original carpet to create a matching reproduction (antique carpet of the same pattern is no longer available). Although the ornamentation (especially the music room molding) is exquisite and the antique furniture is beautiful, the elegant, freestanding, self-supporting, cantilevered, three-story, circular staircase is the highlight. And then there is the view over what was, and still is, the largest private garden in downtown Charleston.

We were fortunate to be able to have a private tour by some friends we met on our June cruise of parts of the Alaskan Inland Waterway. Alex, an accomplished amateur travel guide, insisted that we needed to expand our narrow perspective of the city. So he took us on a walking tour of a few important areas outside the city’s historic core—places we would probably not have visited on our own. These included: