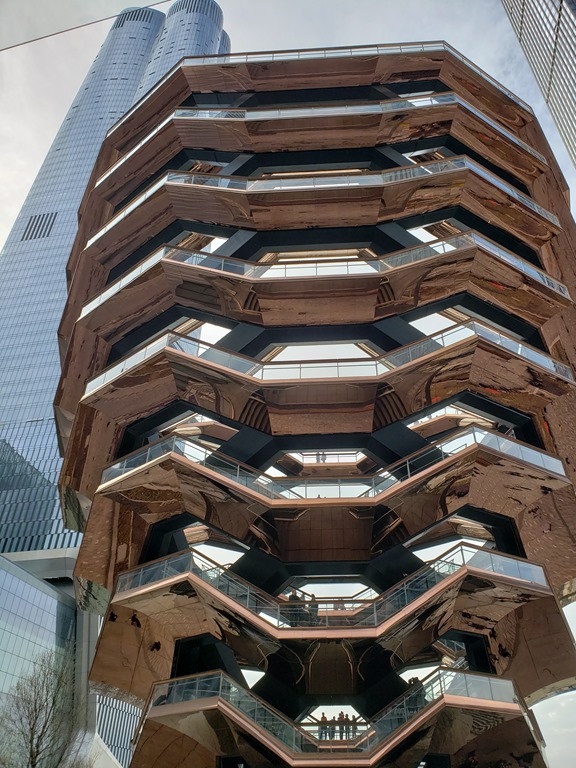 Hudson Yards is a group of outsized, angular high-rises in the massive Hudson Yards development. It has been oft criticized for its scale, lack of humanity, its proliferation of multi-million dollar condos and the marble- and chrome-clad, luxury shopping mall that caters to the one percent.

Even its public art, especially the copper-clad, 1,500-step, aerobic spiral staircase dubbed The Vessel has come in for its share of criticism. The populace, however, may differ with at least some of these reviews as The Vessel, when it was open, required long waits for the pre-booked tickets required to climb and take in the views from the giant StairMaster. 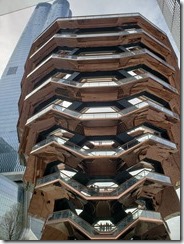 Even so, the 14 acres of public space and the massive, new contemporary art and cultural facility, called The Shed, has been singled out for acclaim. First is its architecture, with its tufted pillow-like, Teflon-coated dome, which can be retracted on giant wheels. Plus as a contemporary art and cultural center, it provides a venue for both indoor and open-air concerts. 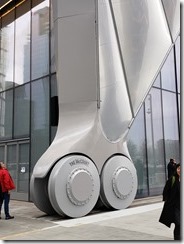 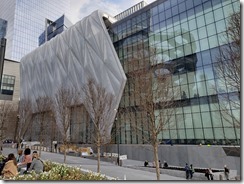 The Shed’s opening commission combined images created by abstract visual artist Gerhard Richter with music by composers Steve Reich and Arvo Part. It consists of two parts, each staged in a room with Richter’s art. The first room was lined with strips of Richter’s electronically-enhanced wallpaper interspersed with jacquard woven tapestries. A choir of perhaps 20-30 singers, dressed in street clothes, wove seamlessly through the standing audience, singing a choral piece composed by Part.

The second part of the performance, staged in a separate room, is certainly the more striking of the two. The audience moved into a seated area in the second room which was occupied by a small orchestral group on one side, a blank wall on the other, and two long walls, each sporting a set of relatively nondescript, rainbow-colored, horizontal lines. The focal point of the room shifted as the lights dimmed, the orchestra began to play Reich’s rhythmic, recurring piece and the blank wall lite up with a projection of Richter’s “Patterns” series. The projection began with one of the artist’s multi-colored abstract paintings. A computerized image of the painting of solid, colored, horizontal lines similar to the patterns on the wall. Then, with the music in the background, the image slowly and continually divided vertically into two mirror-image halves, with each cell becoming increasingly dense and highly stylized into abstract images, many of which are reminiscent of Indian art. Then, halfway through the roughly 30-minute piece, the progression reversed, ending up with the same image it began with. Overall, a beautiful, engaging and hypnotic experience that we found to be well worth the $25 admission. 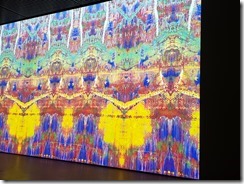 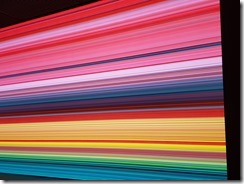 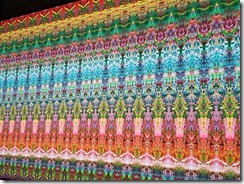 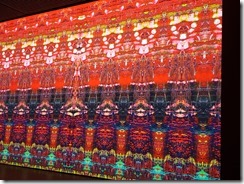 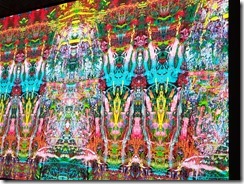