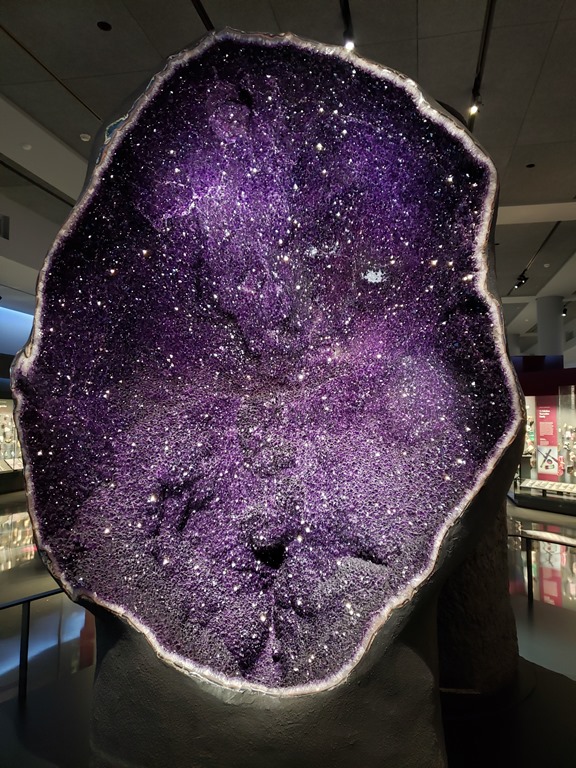 American Museum of Natural History, or AMNH, as it is commonly called, is located on the Upper West Side of New York City. It is considered one of the world’s preeminent educational, cultural and scientific institutions. This huge complex has over 25 interconnected buildings that house over 40 permanent exhibition halls, a planetarium, and a library.

Only about 3% of its millions of specimens and cultural artifacts are on display. Still, one needs many visits to fully explore all of its exhibited plant, animal, fossil, mineral, rock, meteorite, human remains etc.  Exhibits go into great detail to educate visitors about the things they are seeing, how they came about, and past/current threats to their environments. It is truly an amazing museum.

While fascinating to explore, we also find ourselves often getting turned around or scratching our heads on how to get to the areas we want to explore. Fortunately, the staff is good at pointing the way. And the museum has a free app that you can use on your cell phone to help you find your way.

In 2021, we visited ANMH primarily for its exhibition on minerals and gems. The obvious draw of the exhibit is the specimens themselves, from giant, shimmering geodes to small, meticulously cut diamonds and virtually every type of mineral and gemstone in between. 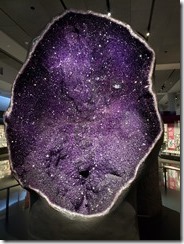 One can appreciate the exhibit in any number of ways such as in the context of:

You can appreciate the minerals for their practical uses such as the roles of:

Or you can just appreciate the beauty and the elegance of any of the wide range of precious and semi-precious gemstones, including both inorganic and organic (pearls, coral, amber, etc.), both in their natural states and after they have been cut and/or polished.

A College Course in Geology

The exhibit goes far beyond the utility, beauty, size and age of minerals. As a New York Times review portrayed it, it is almost a college course in geology.

The begins with a discussion of the origin of the first elemental minerals in the cores of stars. It then moves on to how others were formed in conjunction with solar systems and planets. Existing minerals continue to evolve and new ones continue to be created often through some combination of heat, pressure, and water. Examples include volcanic eruptions; tectonic pressures; thermal vents;  or even minerals being dissolved in and precipitated out of water.

It then goes into depth (sometimes too much depth for us) in discussing the chemical compositions and rationale for the different types of mineral classifications (both chemical and structural). It discusses the differences among and the hierarchy of:

In summary rocks are minerals and minerals have crystalline structures.

And it explains how different minerals have different combinations of properties such as:

A section of the exhibit focused on the optical properties of minerals. Color is determined by how different materials absorb, reflect, and refract wavelengths of visible light. Different parts of the same mineral can appear as different colors. Some minerals also absorb and reflect ultraviolet light and thereby appear iridescent, either as florescent or luminescent. What’s interesting is that rocks that appear as a bland grayish-brown under normal light take on vivid colors in ultraviolet light. Inclusions in a mineral can result in cats’ eye-like patterns. Gem cutters can split wavelengths in various ways to create sparkle and the perception of different colors.

Overall, the exhibit was a fascinating, if somewhat dense and pedantic examination of the nature of minerals.

The Big Bang and its Aftermath

Since the earth’s surface, at that time, was being continuously bombarded with asteroids and comets, it was far too hot for liquid water to form or for life to begin to take hold. This began to change about 3.5 billion years ago when the bombardment slowed and the earth cooled, water form and the first single-cell bacteria began to emerge (as evidenced by fossils).

One of the big outstanding questions is how the moon was created. Hypotheses include it being:

In any case, much more is known about the moon after it went into earth orbit. For example, while the earth continued to evolve through volcanic and tectonic activity, the moon stopped evolving about 2 billion years ago, when lava stopped flowing.

Much is also known about the synergy between the earth and the moon. This includes:

If these explanations are a bit beyond the realm of comprehension, the story of the moon is, so to speak, brought down to earth by an incredible series of photographs that NASA took of its moon missions. Everything from photos of the asteroid-scarred surface and remnants of its last lava flows to pictures of the earth rising over the moon’s horizon and close-up pictures of astronaut spacewalks and moon walks.

Continuing Evolution of the Earth

Another exhibit examines the recent and current state and the future of the earth, including:

The exhibit then discusses the continual changes in the earth’s climate and how natural causes cannot explain the current rate of change that has:

When we were last there in 2017, we explored another interesting exhibit that explored the many critical roles that bacteria plays in the human body. It gave a brief overview of the thousands of types of bacteria on the skin and in the mouth and then focused on the incredible variety and volume (about 100 million microbes per milliliter) in the gut. This bacteria (which makes up the so-called microbiome or community of micro-organisms that live together) is found through the entire gastric system.

Although each person’s microbiome is different, there are commonalities among people who live in the same geographies, have similar diets, and are exposed to similar environmental mental conditions. Microbiomes play critical roles in helping humans digest food and fight disease. They are also believed to play important, but much less well-understood roles in a number of other functions such as appetite (by “telling” the brain when to find food), moods, and sleep patterns (the microbiome directly produces 20 percent of the body’s serotonin). They are also thought to play a contributory role in weight gain and loss, mental health, and even autism.

In fact, experiments in transferring part of one individual’s microbiome to another is already beginning to suggest a new way to control a person’s food intake and ways to treat depression. Although little is truly known of the role of the microbiome, much less in how to use it to improve an individual’s physical and mental health, it shows enormous potential.

This exhibit is an adjunct to the museum’s Hall of Ocean Life. It provides reproductions of 46 rare illustrations that portray the first truly scientific efforts to understand the oceans some 400 years ago. These sketches portray the mystery and sheer beauty of dozens of amazing species and provide clues as to their anatomy, habits, and evolutionary origins. The large Ocean Life exhibit, meanwhile, provides an overview of thousands of species of vertebrates and invertebrates that populate different sections of the ocean, from near-shore estuaries and shallow coral reefs to the open ocean and deepest trenches, the interaction among these species and the impact of climate and climate change on all of them.