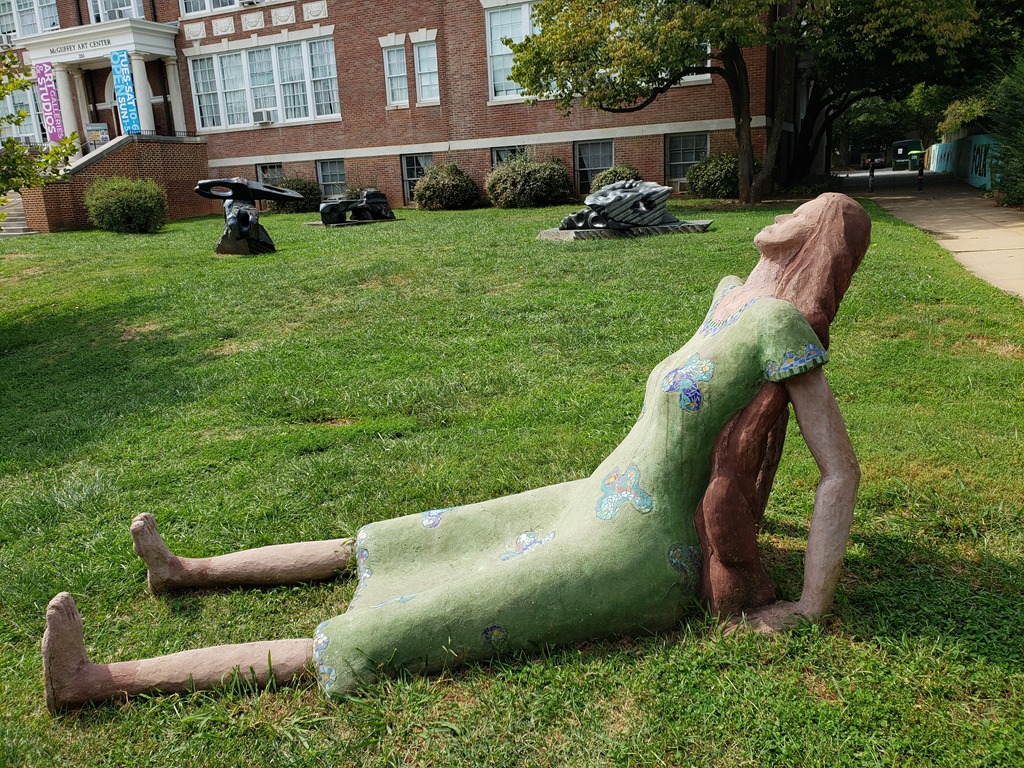 The Hudson Valley New York follows the Hudson River from Albany, down to Westchester. It is a beautiful area and has some interesting museums, sculpture parks and, of course, some wineries.

Art Omi in Ghent New York is an outdoor sculpture and architecture park. Unfortunately, the indoor gallery was between exhibitions during our visit. And the continual drizzle, wet grass, and mud limited our outdoor time. Still, we managed to take an abbreviated tour of the 300-acre park to explore some of their approximately 60 contemporary sculptures and 10 architectural models. Among our favorite sculptures were:

Richard Nona’s “Smoke”. Dewitt Godfrey’s “Picker”, Nari Ward’s “Scape Goat”, Donald Baechler’s “Walking Figure” and Donald Lipski’s “Sallie”. We also enjoyed a number of others which, since their names were not shown, we couldn’t specifically identify. Click here for better pictures of some of these and some of the park’s other sculptures. 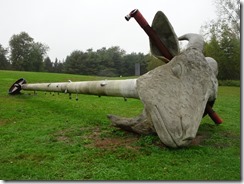 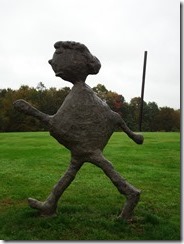 Although we did not make the long, muddy trek into most of the architectural park, we did explore Violo Sgo and Hans Tursack’s nearby “Transfers, and courtesy of our telephoto lens, Leven Betts’ Zoid and probably the biggest highlight of the park, Alex Schweder and Ward Shelly’s fun “ReActor”, a glass house propped on a single column that allows the house to rotate in the wind.

Dia: Beacon is a large, former Nabisco factory that was repurposed to house many large-scale contemporary installations from multiple artists. We found most to be totally incomprehensible. Some were quite engaging, even if we did not really understand them. These included Walter di Maria’s Truck Trilogy, with three, pristine, vintage Chevy trucks whose beds each held three stainless steel rods—circular, square, and triangular in different orders. Robert Smithson’s sculpture consisted of three different shaped piles of dirt, each with different shaped mirrors and a fourth pile of shards of broken glass. Among those prominent artists who are particularly well represented are: 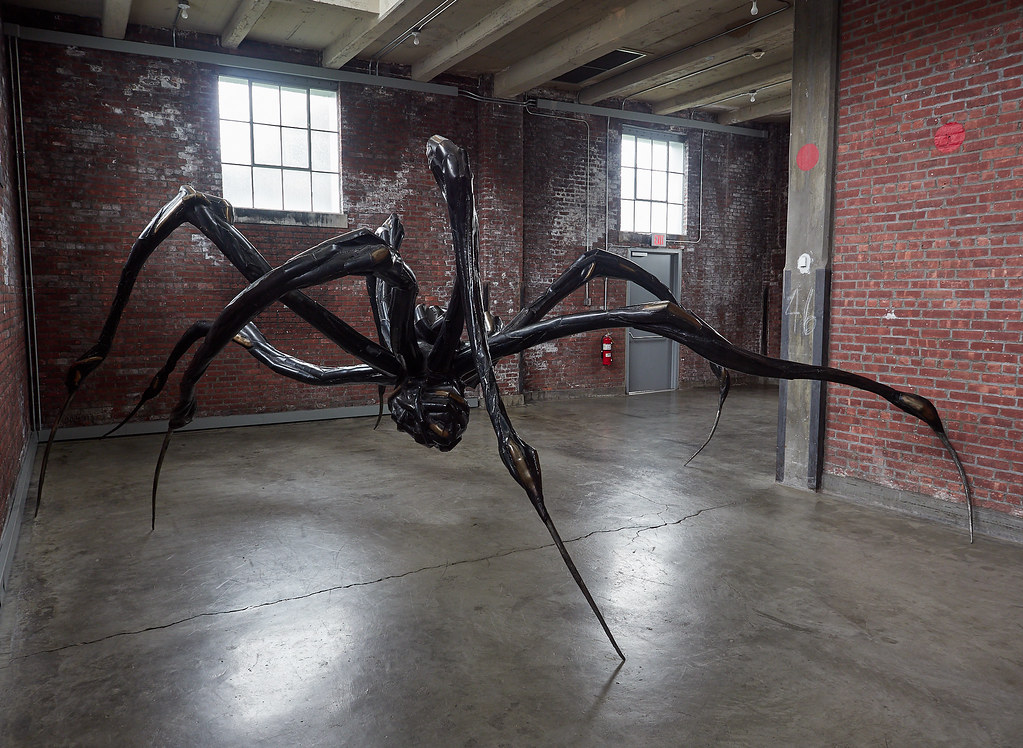 Our humor award, meanwhile, would have to go to Robert Judd. While his large-scale work included several wall-sized, black and white projections of pictures of trashed rooms, one piece received disproportionate attention. This was a panel of multi-colored neon tubes that flashed on and off in different combinations that ended in stick-figure images of men—including one hanging in a noose. Each figure was distinguished by a large neon penis.

Storm King is considered one of the best sculpture parks in the world. It is a huge, 500-acre facility with more than 100 modern and contemporary sculptures and commissioned installations. Clearly, the Gold Standard to which few can even hope to compare.

Although we remember loving Storm King, we didn’t recall just how much we loved it. We don’t even know where to start in describing the park whose vistas, with gentle hills, streams, small stands of forest, ponds, and Andy Goldsworthy’s undulating dry stone wall that cuts through the park.

The vast majority of pieces are spread throughout the park but it has a small gallery atop a hill that includes a handful of permanently displayed pieces, as from David Smith and Louise Nevelson plus temporary exhibits. When we visited, the temporary exhibits, both within the gallery and spread throughout the park, were part of the exhibition named INDICATORS: Artists on Climate Change, which includes more than a dozen artists’ portrayals of some portion of the issue.

Some of the pieces that we either found particularly striking or that we especially enjoyed are:

Although we greatly enjoyed these and many others, we were awed by a number of Mark Di Suvero’s monumental sculptures that are spread across and effectively dominate the open, South Fields section of the park. Among those we found most impressive were “Neruda’s Gate” and the huge, “Pyramidion”.

It had been a number of years since our last visit to Storm King. We will return more frequently.

In the past, we haven’t been that impressed by wines from the Hudson Valley. We hoped for a chance to change our hopefully outdated impression by visiting some wineries in the area.

Brotherhood Winery,  established in 1839, claims to be America’s oldest continuously operating winery in the country. Now owned by a Chilean company, it sources grapes from around New York State and sells wines from affiliates in Chile, Argentina, and Italy. It offers a wide range of wines produced from European varietals, native North American grapes, and fortified wines of which we tasted ten. We particularly enjoyed its non-vintage, semi-sweet Gewürztraminer whose sugar is balanced with nice acidity, and the floral nose and pear its off-dry (nicely balanced with acidity) 2017 Riesling. Our favorite of its reds was an Argentina grown and produced 2019 Maucho Malbec. We also enjoyed a couple of its specialty products including a mulled, spiced Holiday wine produced with a combination of red fruit and its fortified (14% alcohol) Cocoa di Vine, a chocolatey cream wine that is similar to Bailey’s Irish Cream.

Benmarl Winery. Although it claims that its vineyards, first planted in the 18th century, are the oldest in the country, it did not begin producing any of its own wines (and then, only in small volumes) since 1956 and did not begin commercial production until 2005. But despite its grape-growing heritage, it now has only 10 acres under cultivation and buys most of its grapes from Long Island and the Finger Lakes.

We tasted eight of the winery’s wines, finding three and a half to our tastes. We were especially impressed by the structured, light fruit of its 2019 Estate Cabernet Franc and the blackberry and tobacco of its 2019 Proprietor’s Reserve (80% Merlot, 13% Cabernet Franc, 7% Malbec) and its dry, slightly acidic 2020 Reserve Riesling produced from North Fork fruit. The “half” is for the white peach and honey of its off-dry 2020 Riesling (from grapes from Long Island, Finger Lakes, and the Hudson Valley).

Fjord Winery, a tiny (1,000 case) home-based operation was the surprise of our limited Hudson Valley wine tour. The winery, which is owned by Benmarl’s winemaker and his wife, has been growing a few acres of Riesling, Alberino, Cabernet Franc (and most recently a little Pinot Noir in anticipation of introducing a sparkling wine) grapes on land leased from an apple orchard for several years before producing its first wines in 2007 and introducing its own label in 2017. Although it currently buys most of its grapes from Long Island and the Finger Lakes it is expanding its own cultivation and expects to produce 90 percent of its own fruit (for a maximum planned production of about 2,000 cases within a couple of years. It currently sells out almost solely on the basis of its wine club and word-of-mouth, plus limited sales to a few in-state retail stores and local restaurants.

Of the seven wines we tasted, we enjoyed five. This began with the crisp, dry, 2020 Estate Dry Rose to its-off-dry (2.3 percent residual sugar) 2019 Riesling (from Finger Lakes fruit) and its own 2020 Estate Riesling (which has 2 percent residual sugar but tastes slightly sweeter due to its lower acidity). Although its 2019 Estate Cabernet Franc was a bit light-bodied and tart for our tastes, we were impressed with the fruit and body of its 2019 Merlot. We loved its 2015 Late Harvest Chardonnay whose production was almost an accident. The couple was so busy that harvest season that they did not get around to picking the fruit it bought from the neighboring Winecliff winery until a few weeks after it intended. Then, still pressed for time, it froze the grapes which ended up producing a golden, viscous wine with 22 percent residual sugar!

Millbrook Winery. The winery owner also owns Villa Pillo in Tuscany and Williams Selyem in Russian River. We were unimpressed by the Villa Pillo Sangiovese/Cabernet Sauvignon/Merlot blend and by the Millbrook-sourced and labeled wines (including the 2015 Cabernet Franc Special Reserve, which they claimed to be the winery’s premier wine). Our favorites were a 2017 New York State Merlot (sourced from the North Fork of Long Island) and by the 2016 Williams Selyem Russian River Pinot Noir, which had much less pronounced fruit than most Russian River pinots.

Blu Pointe (Newburg, NY) has a beautiful setting over the Hudson River. While it offers a range of dishes, seafood plays a particularly large role on its menu. We shared two large seafood-based appetizers for lunch: charcoal-grilled calamari with lemon saffron emulsion and roast peppers; and charcoal-grilled octopus with sun-dried tomatoes, fennel, peppers, and onions. While we generally enjoyed both, we would have preferred a less pronounced charcoal flavor. Given that we were there for lunch among wine tastings, we were not able to take advantage of their very impressive wine list, something we will certainly do if we return for dinner.

Captain’s Table (Monroe New York). Although we weren’t especially impressed by the split pea and ham soup or the watery vegetable broth in which the littleneck clams were steamed, both were acceptable. We also had a very big and very good cheddar cheeseburger with bacon and mushroom. And, although the onion rings weren’t homemade they were pretty good. The restaurant has a small, low-priced wine selection (from which Joyce had an Italian pinot grigio and a beer list that included a few craft beers, from which Tom chose an acceptable, although not especially complex Bell’s 2 Hearted IPA.

Opus Westchester (White Plains). is a nice boutique hotel. We were upgraded to a king executive suite which had a huge corner room, a sitting room, great bedding, and a very nice bathroom. A wonderful place to stay if you are in the area.

The Sleep Inn & Suites (Monroe NY) was clean and comfortable. But the soundproofing was a big turn off and we will not return. We could hear everything from the hall and the rooms next to us. This is a known issue to the staff and they are also puzzled as to how bad the soundproofing is for a fairly new building.

Mulino’s of Westchester is a classical, somewhat old-school Italian restaurant in Westchester where we had a very nice meal. It started with complimentary tastings of parmigiana cheese and salumi. Then we had two very good-sized entrees, both of which were very good. Although Joyce had to send back her first, overcooked salmon, the replacement was cooked perfectly, with asparagus in a caper, white wine, and lemon sauce. Tom was intimidated by and could not even conceive of finishing his sautéed veal scallops that were stuffed with cheese, herbs, and mounds of prosciutto and braised in brandy with shitake mushrooms, peas, and cream. Our wine, from a largely Italian list, was a 2015 Canneto Vino Nobile di Montepulciano.