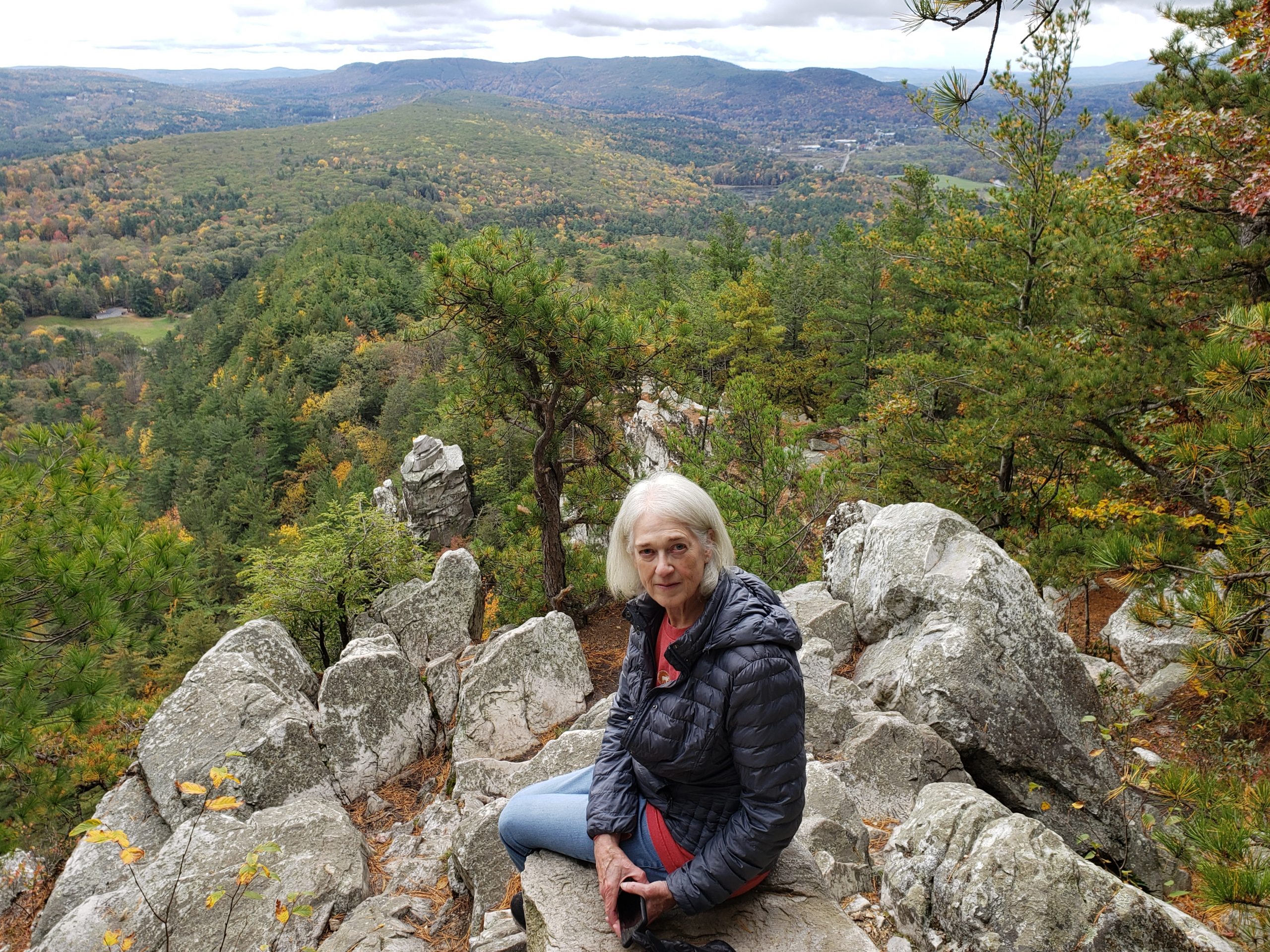 The Berkshire region is an area in the western parts of Massachusetts and northwest Connecticut. It is a beautiful area of rolling hills and includes part of the Green Mountains. We arrived in the northwest corner of Massachusetts’ Upper Berkshires via Vermont’s Route 100, the state’s unofficial Foliage Highway. The drive took us through North Adams, home to the giant Mass MOCA museum of contemporary art, into the always lovely Williamstown, home of Williams College and The Clark, one of our favorite small museums that has an incredible, world-class collection of Impressionist works.

We then drove down to the heart of the Berkshires around the towns of Stockbridge, Lee, Lenox and Great Barrington. This natural beauty of the mountains and forests combined with numerous cultural venues has been attracting artists, aristocrats, and tourists from New York and New England for more than a century. It also attracts us.  Here are 6 must-do things in the area.

1. Get Tickets to Tanglewood

Tanglewood is a beautiful large green area in Lenox where one can stroll year-round free of charge when there aren’t any events. But for us, we most enjoy it during the summer when the Boston Symphony Orchestra takes up residence. We, along with hundreds of others, lounge on the lawn with a picnic while listening to the BSO play live in the background. Some people have elaborate picnic setups with their friends. Candles, china, champagne flutes. Others, like us, pick up some food and wine and plop ourselves on the grass, taking in the lovely atmosphere. A nice way to spend a summer evening in the Berkshires.

The area also has a lot of museums.

Venfort Hall Mansion and Gilded Age Museum (Lenox) is a 28,000 sq-ft, 54-room Jacobean Revival-style mansion built by Sarah Morgan (sister of J.P.) in 1893. It was the last of six Berkshire “cottages” designed by society architect Arthur Ratch, who also designed 22 Bar Harbor “cottages” and 26 grand town houses in Boston’s Back Bay—all before he died at the age of 44. It was equipped with the most modern features of the day including electricity, gas, elevator, burglar alarm, and an electro-mechanical system for summoning servants to a particular room.

While the long-vacant building had greatly deteriorated over the many years it was vacant, it has been significantly, if incompletely renovated and refurnished by period antique furniture. The Morgan family, in fact, continues to donate occasional pieces.

The mansion and museum can be toured via a docent or a self-guided audio tour. The first two floors, which were occupied by the family, have been renovated and are open for visitors. The basement (which includes the original kitchen) and the third floor, which housed many of the rough 60 servants (30 of which attended only to Sarah) required to run the house in season, have not been renovated and are not open for tours.

While some of the rooms, especially the Great Hall (with its musician gallery), the Billiard Room (where the men adjourned after dinner, when the women were “relegated” to the parlor) and Sarah and husband George’s bedrooms were particularly grand, most were lovely.

We, however, were more interested in the Guilded Age Museum than in the mansion itself. Although the tours (guided or audio) barely touched on the life of the age, a few exhibits helped shed a little light on the era. There were, for example, pictures of Ratch’s five other Berkshire cottages with overviews of the families that owned them plus pictures and overviews of Bellefontaine , the grandest of the Berkshire residences. One exhibit mentioned the annual Tub Parade in which society women dressed in their finest gowns and decorated their carriages with the best flowers to parade around town in a show of glamour. And one exhibit mentioned Charles Dane Gibson’s creation of the elegant, self-sufficient Gibson Girls as a satire of Gilded Age society and social climbing. 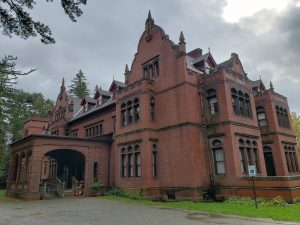 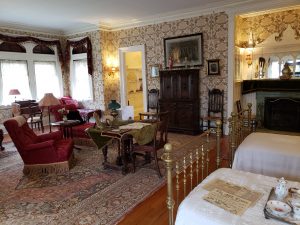 Norman Rockwell Museum (Stockbridge), where you can see many of Rockwell’s original paintings as well as special exhibits

Chesterwood (Stockbridge). This was the summer home and studio of Daniel Chester French, the sculptor who created Washington D.C.’s Lincoln Memorial and many other iconic monuments and sculptures. One can view models and final works of his bronze and marble art.

The Mount (Lenox). This is Edith Wharton’s turn of the century estate where you can tour the main house and stroll through the sculptures in its garden. It has exhibits that talk about the time period that she lived there.

Naumkeaq (Stockbridge) is a lovely estate that has public gardens and historic home. In addition to touring, it frequently hosts concerts.

Here are some of our favorite galleries.

Schantz Galleries Contemporary Art (Stockbridge).  It has one of the best art glass collections that we have seen outside of Tacoma’s Glass Museum. It claims to be the oldest art glass gallery in the country and carries works from more than 60 artists from around the world including: 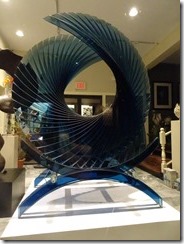 Other galleries more in our price range that we like to visit (and often buy a piece at) include:

Another of our favorite activities in this area is hiking.

Monument Mountain Trail. One can reach the 1,642-foot summit (Squaw Peak) via a 720 feet climb via three different routes, all leaving from the same trailhead. All three go to Inspiration Rock, a somewhat misleading name for a rock that commemorates the donor of the land, but is only part way up the mountain and offers no view. While all three trails meet at the rock, only one reaches the summit and the views.

Bash Bish Falls Trail. One can reach these falls via either Massachusetts (via a 0.4-mile trail) or New York (via a 1.5 mile each-way trail). We choose the New York side and were rewarded with a walk along the lovely (but dangerous) rapidly flowing stream that forms a continual series of rapids as it flows downstream. Although the views along the easy (roughly 300-foot elevation gain) trail is a reward in itself, the climax comes when you reach the double-throated falls. At 80 feet, it is the tallest single-drop waterfall in Massachusetts. Taking the stone steps down to the base of the falls provides a very different, and worthwhile perspective from a view from the overlook. You can either extend the walk (or take your car) by stopping at the Copake Iron Works Historic Site which can be reached from the road to the trailhead. The ironworks operated from 1845 to 1903. It took advantage not only of a vein of iron ore but also the local wood and limestone required to smelt the oar and the stream for power. Originally the area included an entire company town where the workers were paid in company script. Today, the site consists of an interpretive trail with 25 preserved sites (including the charcoal blast furnace) and the machine shop that now serves as a visitor center, with a movie and interpretive panels.

The Hickey and Peeskawso Peak Loop is a 2.4-mile trail with 670 feet of elevation gain. It has three very nice viewing spots near the summit. In addition to being a nice hike, it also has an interesting history. David Fields, a local resident, invited Oliver Wendall Holmes, Nathanial Hawthorne, and Herman Melville to take this hike. When struck by a thunderstorm, they took shelter in a cave and engaged in a vigorous discussion which Melville claimed led to the idea for Moby Dick. The hike also spurred a close friendship between Hawthorne and Melville.

The hike begins as a smooth, gradual ascent that becomes moderately steeper and rockier, requiring a fair amount of scrambling on the upper half of the Peeskawso trail. Devil’s Pulpit, a short, rocky offshoot of the trail is well worth the detour. The downward section of the loop (going clockwise) makes for a much less hazardous descent. 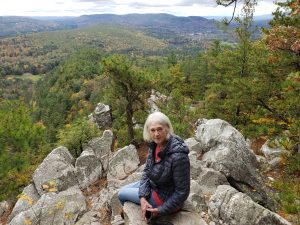 Olivia’s Overlook (Lenox) in the Yokun Ridge is a 2-mile hike up the 528-foot overlook. It serves as the trailhead for 6 miles of trails through the area.

The area has some nice B&Bs and inns. But most are pricy and have expensive cancellation policies. Therefore we have stayed at several chain hotels.

Courtyard Lenox. This is a fairly new place. During Covid, it is not offering breakfast at all. You can buy some food at the Starbucks in the lobby (perhaps that is why they are not offering food). The room was modern and fairly large, as was the bathroom. But the mattress was old and worn out. Strange for a new hotel. When we complained we were told that they were replacing mattresses as they wore out. How does a mattress wear out in a 4-year-old hotel? They must have shipped them in from another hotel. The lack of breakfast and the mattress are both turn-offs but the location is good.

Hampton Inn & Suites in Lenox, Massachusetts is a typical Hampton Inn. It was comfortable, clean, and had a decent breakfast. Our biggest complaint is the layout of many Hampton Inns. They have a mirrored closet between the bedroom and the bathroom. Both of us hit the mirror wall when we have tried to get into the bathroom at night due to the reflection. And why can’t hotels put a nightlight in the bathroom to help people who have to go at night? Oh well.