Dining in the Camden, Rockport, Rockland area has become a matter of habit for us. Since the region consists of far more tourist restaurants than it does “real restaurants”, we search for new options each trip, but, at least for dinner, tend to end up at our old favorites. On our 2021 trip, unfortunately, some of our favorites were closed on the days we were there due to staffing shortages. But that forced us to seek out new alternatives.

Primo is our primary mid-coast go-to restaurant. Chef Melissa Kelly focuses on fresh, local ingredients. After a tour of Kelly’s renowned herb and vegetable gardens, her chicken coop, and duck pond (her pigs have been moved to a separate part of the property), we always struggle to select from among the interesting dishes.

Natalie’s is located in the Camden Harbor Inn, a boutique Relais and Chateaux property. It is a lovely setting for enjoying a nice meal whether you eat inside or on its outside (heated) porch. While it does have an a la cart menu, we often go for its multi-course lobster tasting menu. The combination of the food, the ambiance, and the friendliness and helpfulness of virtually the entire staff always make our dinners there special. 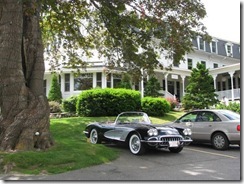 2021: As usual, we ate on the outside deck to enjoy the beautiful night. We settled on the a la cart menu this time instead of partaking in our normal multi-course lobster tasting menu. Tom had a nice 14-day aged duck with cabbage, duck confit, and blueberry sauce. But this time we were disappointed with the steamed lobster with wild rice and green apple. The flavors were bland and didn’t really work together. Still, the atmosphere and the service will bring us back in spite of the disappointing lobster dish. We enjoyed a St. Innocent Eola-Amity Hills Temperance Hill Pinot Noir with the meal.

2015: This time we ordered a three-course meal.

Each dish was paired with a wine selected by the Sommelier (a couple replaced on request when we were less than enamored with the wine pairing choice). This was all in addition to two amuse bouches and intermezzo between each course.

While all dishes were pretty good, we found only one–the swordfish–and the first amuse-bouche (lightly poached skinned tomato with ricotta and paprika oil) to be truly worthy. And then there was the memorable Biehirousse d’Argentel French sheep cheese. Few of the wines excited us. The exception was Joyce’s third choice (after she refused the first 2 she tried) for a dessert wine to be paired with the cheese course (Loupiac Goudit late harvest Semillon/Sauvignon Blanc from Bordeaux).

Although the meal did have a few high points, the highest was the level of service–consistently prompt, knowledgeable, and friendly from everyone who served us. Even so, the meal did not come close to matching the experience of our two visits. And for a total price of $340 (including tip and tax), we expected a lot more.

2013: We choose the three-course menu on this visit. After ordering a bottle of Chablis, we were served an amuse-bouche of lobster nage with salmon roe and fennel. The Atlantic Baking Company bread was served with three small mounds of butter, each for which we could select one of seven salts (we did truffle, porcini, and merlot–interesting, if a bit gimmicky). Then we had two lobster dishes: a deconstructed lobster roll with pickled celery, saffron aioli, and shallot crisps, followed by poached lobster with sweet potato, artichokes, ramps, and a basil foam. Both–especially the poached lobster–were very good and probably amounted to the meat of 1 1/4-pound lobster per person. We had palate cleansers between each course–a peach cream with coriander and fennel and then cherry-peach sorbet in a glass with Prosecco. We both also had the same dessert: a cheese plate with three Maine kinds of cheese: a very good brie-like soft, bloomy rind Prix de Diane, Parmesan crisp, a Gruyere beignet, and panna cotta. The food was good and the service knowledgeable. The only fault was the length of time between courses. Three hours seems a bit much for a three-course meal, even with all the intermezzos.

2011: A special birthday celebration and experience at Natalie’s is summarized in more detail here.

2021: While we didn’t eat here, we did stop for a glass of wine in this pretty location on the harbor. It has a choice of about 40 wines by the glass including 2018 Carson Scott Central California Coast Pinot Noir and 2018 Tiefebrunner Terentino Pinot Grigio which we sampled.

2018:  At this casual, seafood-focused restaurant, we had littleneck clams (steamed in dashi, miso, scallions, and a bit too much ginger for our tastes), rather tasteless fried oysters, and a nice naked lobster sandwich on a brioche bun. For our wine, we discovered a rather basic, but refreshing 2017 French Dominica Picpoul, produced in the Languedoc and made from Folle Blanche, a hybrid initially produced in the Cognac region and sometimes used in some cognacs.

2018: a casual spot at which we shared a lunch of quite acceptable order of fried belly clams with onion rings (both of which we ordered lightly fried, in contrast to the much heavier fry we saw from most of the other fired dishes we saw).

2021: This is a small store where you can buy grocery staples (including lobsters to go) and prepared “deli-type” food-to-go. But it also serves delicious food for dining in. After ordering at the register, you are called when your food is ready. You can eat at tables inside the store or at one of their outside picnic tables. We shared a 2- lb lobster and a huge pint of delicious fried belly clams. What’s not to like?

2018: Fried clams and a lobster roll that we ordered from a trailer across the street from their seafood market. Although there are picnic tables behind the trailer, we had another view in mind. We carried our lunch a couple of blocks to a bench overlooking beautiful Rockport Harbor. The food was pretty good and made even better when coupled with the view.

This is a small, extremely popular Asian restaurant and market in Camden. The market carries an amazing selection of specialty products from across Asia, including a number that we have trouble finding in San Francisco. The restaurant, as the name suggests, tends to specialize in rice, noodle, and other grain dishes, mushrooms, tofu, and chicken. Unfortunately, it was closed the day we were in Camden in 2021 or we would have returned.

2018:  We began with a nice coconut soup with mushrooms and chicken, followed by two main courses: pad thai with chicken and ginger chicken with mixed mushrooms. Everything was very good. Hint: Make reservations in advance. While they do have some walk-ion space at the bar, it filled very quickly. 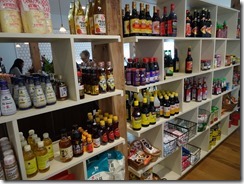 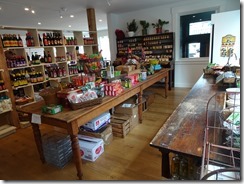 Rhumb Line is located at a shipyard that caters to and docks many of the city’s most luxurious sailing yachts. The restaurant’s patio overlooks these yachts, the harbor, and beautiful downtown Camden. Unfortunately, it remained closed in 2021 due to a 2020 fire. We kept it in our restaurant reviews in the hopes it will reopen.

Waterfront is a beautiful setting on the harbor with inside and outside seating. We started our lunch here with a dozen briny Pemaquid Point oysters, an order of perfectly done fried belly clams, and a lobster roll in which the mayonnaise attempted (but did not succeed) in hiding the fact that the lobster lacked taste. This brings up the great lobster roll debate: That between purists, who prefer their rolls (top-split, of course) naked (with plain unadorned lobster) and those who prefer lobster in mayonnaise. While we generally prefer our rolls with mayo, this runs the risk of too much mayo or seasoning or attempts to disguise older or less tasty meat. 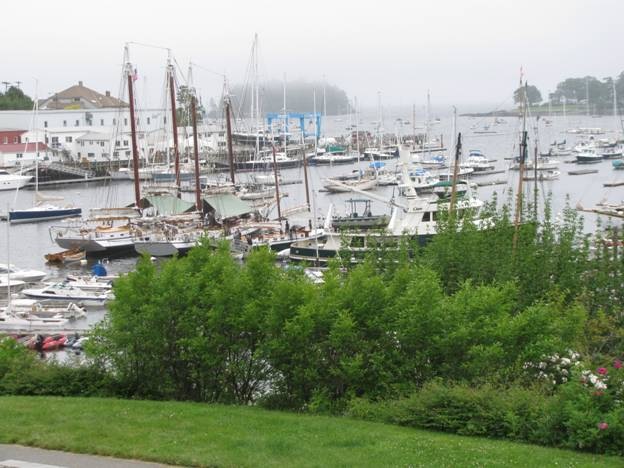