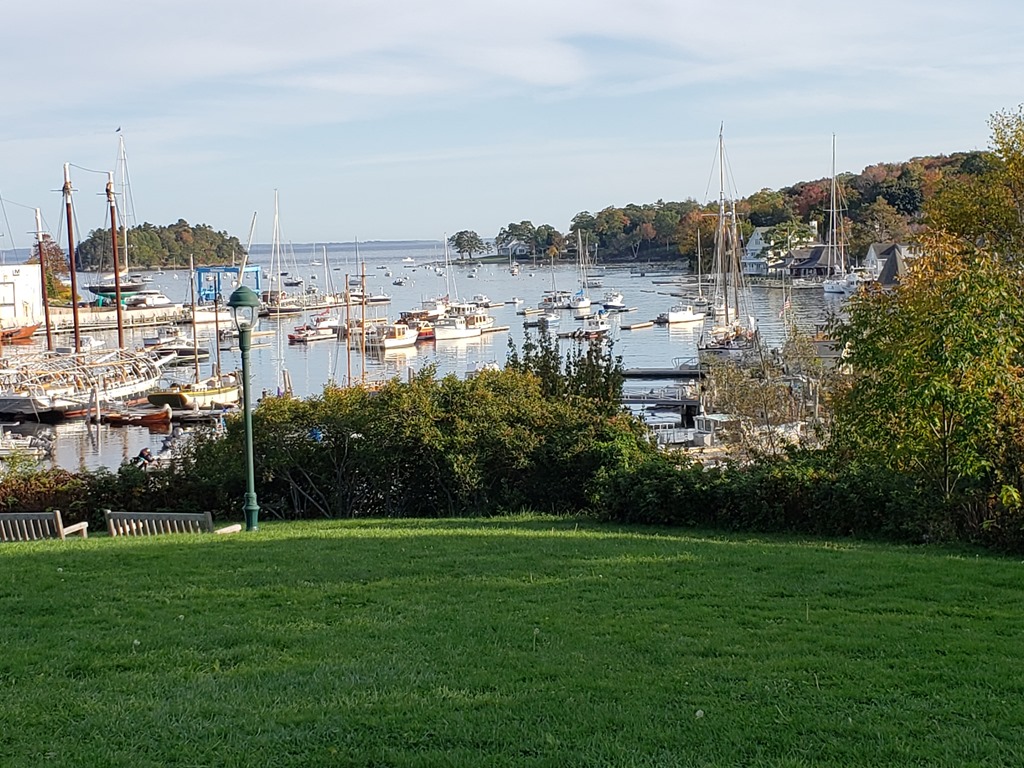 Although the Mid-Maine coast encompassed more than Camden, Rockland and Rockport, they are very close to each other and one of our favorite areas. Partly because they are charming towns in and of themselves (with the best restaurants and galleries east of Portland). Each has its own beauty, personality and offer lots of activities.

To us, Camden Maine is the prettiest town on the central Maine coast. It is also the place in Mid-Coast Maine were we spend the most of our time. Camden is also made for walking and browsing. While relatively small, it is loaded with restaurants, interesting shops, galleries, and a picturorous harbor.The town also has a millstream and a small waterfall that flows through the middle of downtown. 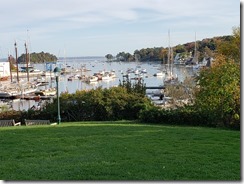 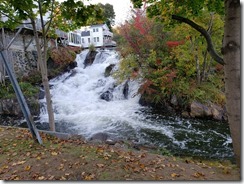 What To Do in Camden

We always like to take a walk past some of the pretty High Street mansions with beautifully-restored former Ship Captain homes (many of which have been converted into Inns) and churches. On our most recent trip, we enjoyed the home that combined a spirit of the Halloween season and a love of football, with appropriately attired skeletons kicking, passing and catching passes and admonishing oneself for missed catch. 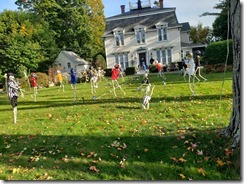 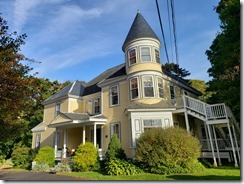 Take a spin through the Chestnut Street Historic District which contains a cross-section of the town’s architectural history, and of its transition from a shipping center to a summer resort community. 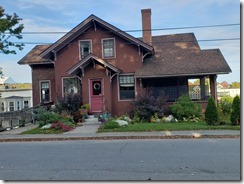 Hike in the Camden Hills State Park. It has lots of easy to moderate hikes that provide beautiful views.

And don’t forget to walk along and window shop in the pretty downtown. Several interesting galleries include the Carver Hill Gallery (with its display of Ted Keller’s “The New York City Paintings and Christina Thuasta’s abstracts) and the lovely turned wood bowls and weaved baskets of Once a Tree.

Don’t forget to get on the water. Although there is no shortage of ships that offer cruises. We went on the Appledore II, a lovely 86-foot schooner that was built in 1978. The ship splits the year between Camden and Key West. It is lovely and comfortable, and the crew was efficient, friendly and informative. We fully enjoyed the cruise, and the fact that it was a warm, sunny day certainly didn’t diminish our enjoyment.

We have stayed in many places in Camden over the years. But our favorite is the Hawthorn Inn. What’s not to love about this place. It is very clean, with large comfortable rooms and excellent breakfast. It is about 2 blocks outside the main part of downtown Camden but they have a back gate that is a short cut to make it even shorter. Breakfast is wonderful. It started with fresh fruit, then we had a tasty Greek quiche with what tasted like homemade crust and toast with blueberry or orange marmaladejam. Our room, (Rose) was very comfortable. Although the shower was small, it had great water pressure and got the job done. They do the little things that we don’t find everywhere like a night light in the bathroom and they even still have shower caps still. What’s even more impressive was that Lisa remembered that we had an issue with the morning light coming into our room through the curtains when we stayed here last (in the Carolina room) and she made sure the curtains blocked the light this time without us asking. Very delightful and friendly. If you can get a reservation, stay here.

We have also stayed at the Whitehall. This bed and breakfast is about a 10-15 walk outside the main part of town on High Street. The first room we were given had a bathroom the size of a postage stamp. We asked to be changed and the next room was much better. As this is an older renovated building, each room is slightly different, which means it is a crap shoot on what you might get. The new room was comfortable and the bathroom was much better. The breakfast is a little unusual with its food. All were small bites of various items. For example, avocado toast, some type of grain which changed daily, small bites of bite and other interesting small bites. Very different from what one might expect but very good.

Riverhouse Hotel and Inns. This is a more moderately priced place to stay. While not as interesting and as intimate as one of the inns on High Street, it is comfortable and serves a continental breakfast.

The Farnsworth Museum is a multi-building museum with a nice collection of American art starting at the 18th century. The works focus primarily on artists who lived or worked in Maine. Represented artists included Winslow Homer, George Bellows, Rockwell Kent, and Edward Hopper O’Keeffe, and Nevelson. Its Wyeth Center is devoted to all three generations of the Wyeth family’s artists—N.C., Andrew, and James. Although exhibits change, it has a number of N.C.’s paintings that interpreted American poems that represented the Revolutionary and Civil Wars and WWI periods. Another exhibit  included portraits that Jamie and Andy Warhol created of each other. Still another exhibited Andrew Wyeth’s Rockland Watercolors, Temperas and Studies (1940-1988) with a number of lovely works, a number of which traced their lineage through preliminary drawings. The museum also has a small sculpture garden and a nicely preserved 19th-century home (of which regular tours are given) of the home of the Farnsworths, the family that initially funded the museum.

The museum has also attracted far more and better galleries that one would expect for a small tourist city three hours up the Maine coast. Although Main, Elm and Winter Streets have a number of nice galleries, onene of our favorites is the Harbor Square Gallery which is an old bank building that was converted into a gallery. The space is as enticing to explore as the art itself. It has a broad selection of art, some of which is exhibited within the huge bank vault, and a roof top sculpture. Art Space Gallery, also on Main Street, features Maine artists exhibiting a diverse range of media including painting, sculpture, photography, and jewelry design. Also worthwhile stops are Caldbeck Gallery and, one more aligned with our tastes, the Gautschi Center. 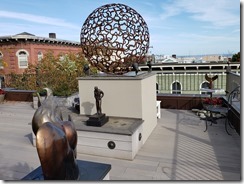 Rockport, a smaller harbor-front town between Rockland and Camden that has a lovely harbor. Its roughly 10-building “downtown” consists of a handful of well-regarded restaurants, a spa, a hair stylist, a photography gallery and little else. Pretty to see. 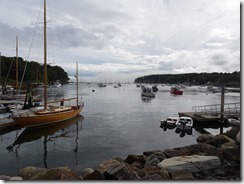 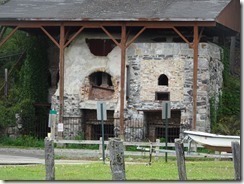 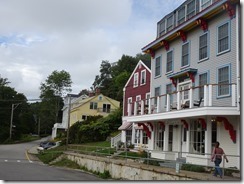