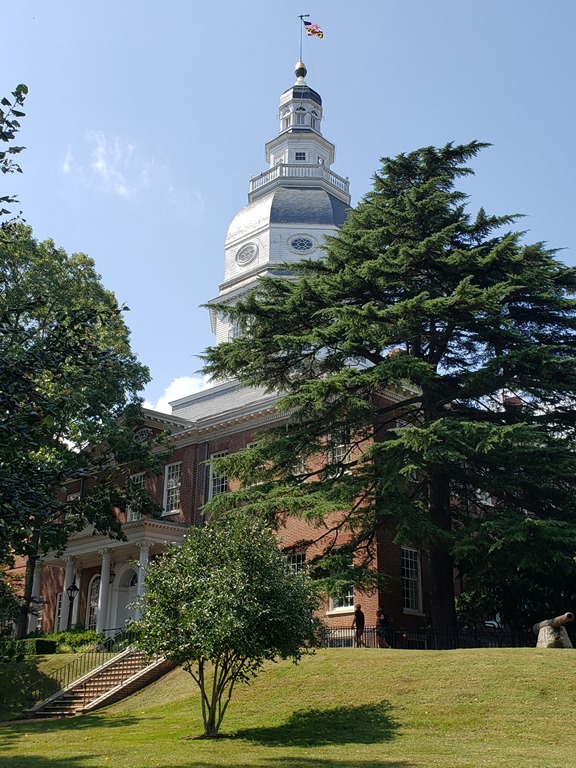 A group of Puritan families founded Annapolis Maryland in 1649 and named it Anne Arundel Town. Shortly after, it became the capital of Maryland. The town’s initial street pattern was laid out across 100 acres in 1674. The town assumed its current name in 1695 and was chartered as one of the first city in the colonies in 1708. Its beautiful State House, which was built in 1772 is the oldest in continual use in the U.S.  In 1783, it even briefly served as the National Capitol—becoming the country’s first peacetime capital. The Continental Congress officially ended the Revolutionary War by signing the Treaty of Paris in this building. And here is where George Washington resigned his commission as commander-in-chief of the Continental Army. It also has the largest wooden dome of any building in the country—capital or not. 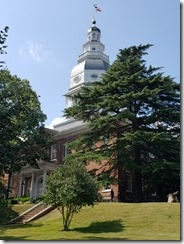 The city remains as vibrant today as it was in the late 18th century. In addition to being the capital of Maryland, it is also the home of the U.S. Naval Academy, is a center of the Chesapeake Bay fishing industry, is one of the most popular sailing centers in the country, and is a popular tourist destination.

Annapolis retains much of its historic charm. It has hundreds of refurbished 18th and early 19th-century Georgian buildings–more in fact than any but the largest American cities. It also boasts 14 other architecture styles including Romanesque, Gothic Revival, Victorian Gothic, Federal, French Empire, and Queen Anne. Dozens of these buildings date from the 18th century with more than 10 from before 1750. A few buildings are more than 300 years old, including some National Historic Landmarks. Several of these homes and their gardens are open for visits and tours. 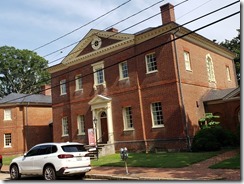 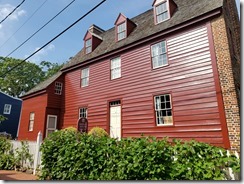 The city also has one of the best-preserved historic waterfronts in the country. It was one of the most important entry points into the colonies and retains a number of old warehouses, a 19th-century market house that replaced the original 1784 building in 1858, and a number of historic inns and restaurants. 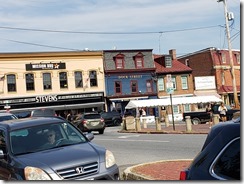 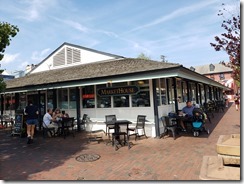 Although we planned to explore the city via a historic walking tour, none were being given on the two days we were in town. Nor did the timing of our visit allow us to explore the ambitious Annapolis: An American Story” exhibition that, when it soon opens will provide a comprehensive overview of the city’s 400-year history. We also had to skip the opportunity to learn the maritime history that has defined and aped the region and the city—a history that is examined in detail at the Annapolis Maritime Museum. The good news is that missing the walking tour and the Maritime Museum does provide an even greater incentive to return.

But while we did miss some of the learning experiences for which we had hoped, we did however have a chance to do something we had wanted to do since our first visit—gain a real understanding of Annapolis’ U.S. Naval Academy.

After showing id and clearing through security, we watched a 15-minute movie at the Visitor’s Center that explains the program that admitted students must endure. They start with “Plebe Summer”, a rigorous fitness and discipline program that tests the stamina and endurance of the best-prepared athletes and instills a camaraderie among the “plebes”. After completing this program, one becomes a “midshipman” and starts a four-year program of education in mathematics, engineering, navigation, military law, humanities, and ethics in addition to regular drills and participation in athletics. After four years of classes, they must pass one final trial–the “Sea Trial”, an incredibly rigorous physical strength and endurance test. Upon graduation, they receive B.S. degrees and are commissioned as junior officers, either an Ensign in the Navy or a Second Lieutenant in the Marines.

While one can walk around the grounds at will, it is well worthwhile to take a formal tour offered by the Visitor Center. The tour begins with an overview of the Academy’s founding in 1845 as a small, 50 student Naval School at Fort Severn. This was the foundation for the academy which was created in 1850. The campus, or Yard, as it is called, expanded from a mere 10 acres of land to its current size of 338 acres, primarily of reclaimed seashore. It now accommodates 4,800 students, a faculty of 600, and a curriculum of 26 academic majors.

To be accepted, students typically have to graduate within the top 20 percent of their high school classes, score an average of 1300 on their SATs, have a history of community service or some form of distinguishing achievement (such as being an Eagle Scout), and obtain a recommendation from their state’s senator or congressmen (each of whom have an annual allotment). In 2021,  only 1,100 were admitted out of a total of 18,000 applicants. Of these, 29 percent were women and 34 percent were minorities. Students receive four years of free tuition, room and board, uniforms, computers, books, and all supplies. They graduate with B.S. degrees and are commissioned as junior officers. All of this is in return for a commitment to five years of post-graduate service.

After passing the school mascot statue of “Bill the Goat”, the Lejeune Hall Physical Education Center, and the senior officers quarters (for those of a minimum rank of Navy Captain or Marines full Colonel), we entered the impressive Dahlgren Hall Activity Center. This large, high-roofed open space has ends are marked with an old ship (on which students used to train that now hangs from the rafters at one end) and a replica of the Wright Brothers B-1 Flyer at the other. 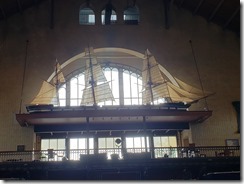 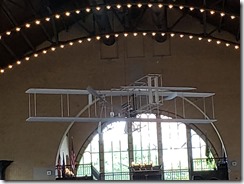 We then passed two of the many artifacts and monuments that grace the grounds. These included two, 29.5-foot surface-fired torpedoes that U.S. ships used against Japanese carriers and destroyers in WWII. Each one had a five-mile effective range, could travel at 40 knots, and carried the equivalent of 1,100-pounds of TNT. Also, the Centennial Memorial, marking the 100th anniversary of the academy with a statue of a nuclear sub shooting out of the water with dolphins (which are a symbol of the Navy) in the bow wake. 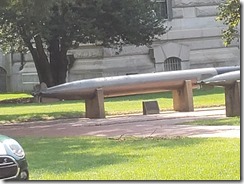 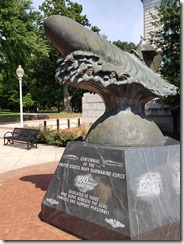 We then headed to the highlight of the tour—Bancroft Hall for the Noon Meal Formation. All midshipmen stand in formation at both ends of the staircase that leads into the Hall and the Mess Room. The Navy band plays the “Anchors Away” and “Marines Hymn”. Upon command, the formations march up the stairs at either end of the doorway (never through the center doors, which are reserved for graduates) into the mess in which they have only 30 minutes for lunch. How so many could get food and eat in 30 minutes is a mystery to us. 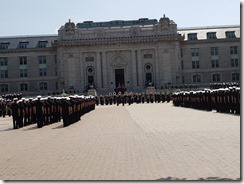 Before we entered the Hall, we learned a little about the massive building, nicknamed “Mother Bee”. In addition to the mess hall, the complex contains the dorms of all midshipmen, 5 miles of hallways, and its own department store. It also contains Memorial Hall, which was our next destination. 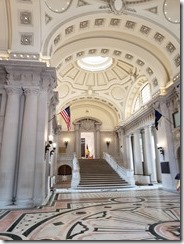 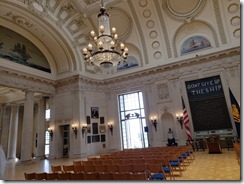 The Hall is used for ceremonies and important presentations. It is framed with murals of important battles and particularly noteworthy ships and a list of all graduates who had been killed in action. We then entered a mocked-up dorm room that provided an overview of each midshipman’s bed, desk, uniforms, covers (Navy for “hats”), computers, and so forth. Outside was a board of honor with pictures of then midshipman and much later as civilians of two of the academy’s most famous graduates, John McCain and first American in space, Alan Shepard. 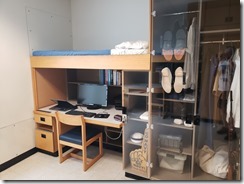 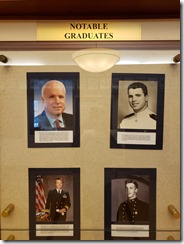 Outside we passed a bandstand and, across the way, a rough 20-foot granite obelisk that has a particular significance for midshipmen. Every year, the class that just completed its junior year must, as a team, boost at least one student to the top to place a cover over the pyramid top. Easier said than done since the column is covered with thick layers of grease. To add just a bit more challenge, as they begin to approach the top, they are sprayed with a firehose. All in all, it proves to be a roughly two-hour endeavor in which the audience takes far more pleasure than the midshipmen. 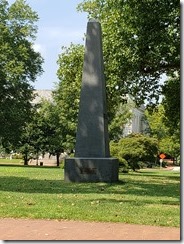 That led to our final stop, the newly re-bronzed-topped Main Chapel which is located at the highest point of the campus. Dedicated in 1908, the chapel has Tiffany-designed stain-glass windows and a 1,500-pipe organ. Between the two sets of pipes hangs a “Votive Ship” as a good luck symbol. 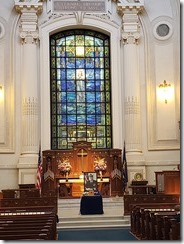 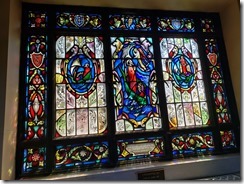 Then down into the crypt which is the new resting place of John Paul Jones. Jones sailed for and became a decorated officer in the navies of three different nations. He had an early death as a destitute alcoholic. He was modestly buried with the proceeds of the sale of his medals in a suburban Paris cemetery that had been paved over for a parking lot.

Then President Jimmy Carter (also an Academy graduate) arranged for the body to be exhumed and sent to Annapolis for reburial in the crypt. France constructed and sent an extraordinary black marble sarcophagus for his body. 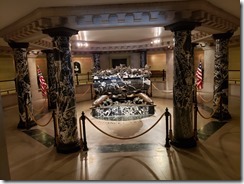 Although we had hoped to take our own independent tour of the campus and visit the museum and the grave of John McCain, we were running late at the end of the 1.5-hour incredibly informative tour. The good news is that we now have another incentive to return.

We only had time for lunch in Annapolis and ate at McGarvey’s Saloon & Oyster Bar. We shared a dozen and a half local, James Bay oysters (a fleshy warm-water variety with little of the flavor or minerality that we prefer). We followed up with more of the same oysters, this time prepared the way we do prefer warm water oysters—fried. These were much more enjoyable, albeit somewhat less healthy. While Joyce stuck with our normal lunch beverage of iced tea, Tom pleasantly downed his oysters with a local IPA.