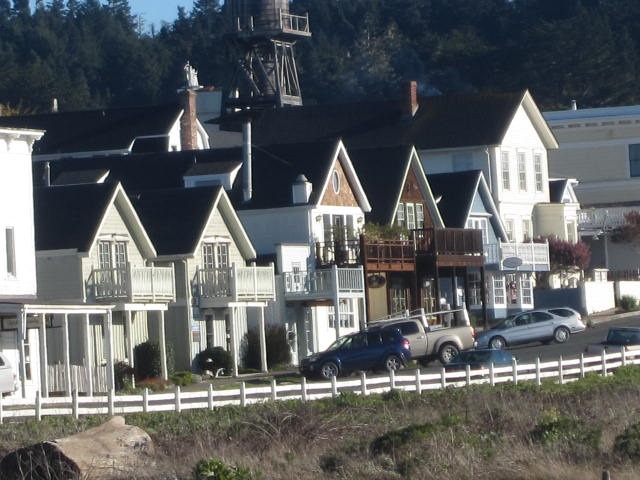 Mendocino on the northern California Pacific coast is a beautiful small historic town that attracts nature lovers of all kind. Actually, Mendocino isn’t a town at all—but an unincorporated slice of Mendocino County. But for convenience, we will continue to refer to it as a “town”. 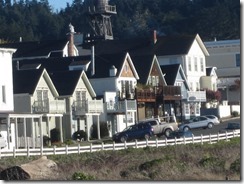 While we have visited Mendocino many times, we wanted to learn more about its history and took a fascinating tour put on by the Kelly House Museum.  If you have the time, we highly recommend it. Our tour began at the Kelly House. An influential merchant family built the home which is now furnished with period furnishings and hosts periodic expositions (in 2021 it had a collection of quilts with scenes of the town.) 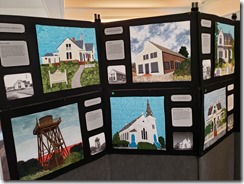 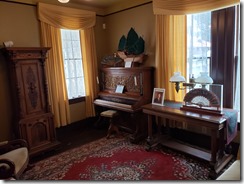 The Town that Lumber Built

The Pomo Native American people settled the area for thousands of years before Spanish and Russian colonists began arriving in the early 1800s in search of gold and lumber. As what has happened to many native people, the Pomo were rapidly displaced, overcome by European diseases, imprisoned, and eventually resettled in a handful of “rancherias”.

The area began to develop in earnest when men came to the area to salvage the cargo from the 1850 shipwreck of the Frolic. Although the Pomos had taken the ship’s cargo, the salvagers recognized the potential of large-scale harvesting of the area’s vast redwood forests. This drew another ship (the Ontario) in 1852 which brought people who built a mill (the largest of 40 in the area) and the town. William Kasten, who was the sole survivor of the Frolic’s shipwreck, claimed he had squatter’s rights to the peninsula. He sold an initial section (currently the entire area south of present-day Main Street) to the lumber company and subsequently sold sections to other early settlers. Milling the lumber fueled the growth of Mendocino from a native American settlement in 1849 to 1,800 people at its 1920 peak. While the mill was initially built near the tip of the headlands, it was later moved inland for logistical regions.

Mendocino’s lumbering industry grew to dozens of logging camps. Skid Roads (roads constructed of halved logs on which teams of bull oxen pulled carts filled with logs) were built to transport the logs to a point in the river where the water was high enough to float the logs to the mill. From the mill, the milled lumber was then carried via skid roads to the headlands. Men initially used a zipline-like set of wires and later aprons or chutes (the bases for which are still at the tip of the headland) from which milled lumber would be slid down to ships anchored in the bay. 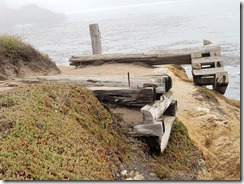 The town grew around the mill, which built homes for its employees.

Many Chinese also came to the area in search of “streets lined with gold”. They settled in one of the nation’s first Chinatowns (just south of present-day Main Street) and worked as cooks, launderers, and laborers. Our tour guide told us how one family, in particular, saved enough money (versus sending most back to relatives in China) to build a store at which most of the Chinese shopped. Their son, Look Tin Eli, ended up as the subject of California and U.S. Supreme Court rulings defining the rights of Chinese settlers as citizens. He founded a nationally recognized Chinese bank and the first Chinese-American shipping company. He also led the effort to keep San Francisco’s Chinatown in the center of the city after the 1906 quake, rather than having it moved outside the city. This effort included the commissioning of a U.S. architect to build a faux-Chinese-style building that became a model for other U.S. Chinatowns.

Unfortunately, the mills closed in 1938 when the stands of huge, first-growth redwoods had been largely depleted. This, combined with the Depression, threw the town into its own deep depression which lasted for more than 20 years.

Mendocino’s Rebirth as an Artist Community

This led to the story of Amy Lou Packard, a University of California Berkeley-educated artist whose parents arranged for her to assist and be mentored by Diego Rivera and Frida Kahlo. She ended up falling in love with the bluffs around the Mendocino in the 1960s and worked to establish the depressed (and therefore low-cost) town as an artist community. She successfully worked with then-Governor Ronald Reagan to block a major development thus preserving the artist community. The combination of the scenery, the quaint old town, and the art, in turn, attracted tourists whose money helped to rejuvenate the town.

The Mendocino Arts Center complex houses a theater, a number of artist studios, and a gallery that highlights works across many media, of its resident artists. The town high school, across the street from the center, demonstrates the school’s own commitment to the arts with a room that houses a large mural and a “wall of art” that showcases some of the art produced by its students. 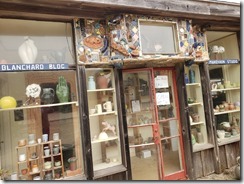 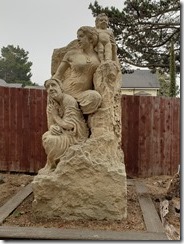 Although 26 of the town’s oldest buildings were destroyed in an 1870 fire, today a number of historic buildings are still standing. Some of these are: 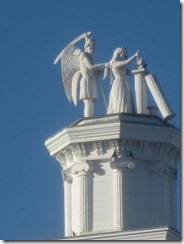 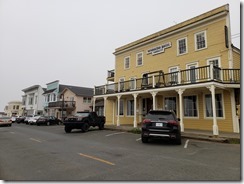 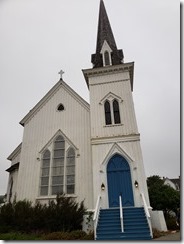 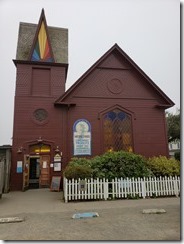 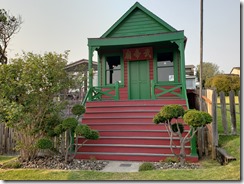 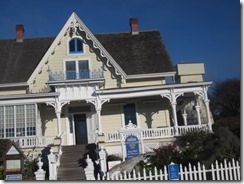 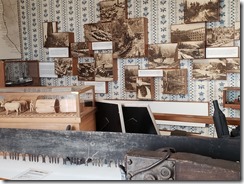 The city’s dozens of water towers make for iconic symbols of the town. Although they now serve primarily as decoration or have been repurposed as quirky housing units, they were built with an important purpose. The town, and indeed, much of California’s North Coast, has relied on an aquifer as its only water source. The water towers stored water that was pumped by windmills affixed atop the towers. The town has more than 123 such towers in 1920 when the town had a population of 1,800 people (down to its current level of 950).

There were and are different types of towers. Some were open, some served as tank houses and some were combinations. They are of different heights and sizes and while most had a single tank, some had two. While some of these towers remain essentially as they were when built (although they lost their windmills with the arrival of electric pumps and are no longer used to store water), others have been shingled and fitted as small apartments, and others have been so expanded or incorporated into other buildings as to barely recognizable as water towers. Whatever their current appearance and use, they contribute greatly to Mendocino’s charm. 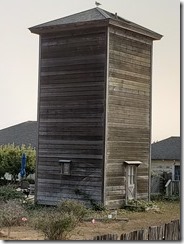 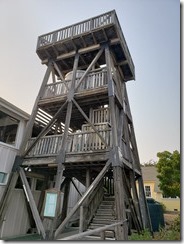 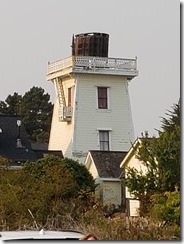 The town is almost as well known for its gardens as for its windmills. The majority of homes have actual gardens or at least flowers. Some are quite elaborate. Most are of informal English style, although a few are relatively formal and a number of others appear to have no design at all. Some are overwhelmingly green; others are dominated by flowering plants and flowering fruit trees. 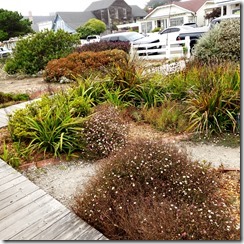 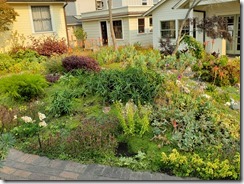 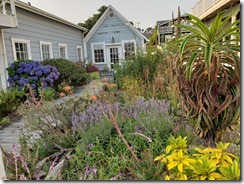 Nor are Mendocino plants and flowers limited to gardens. Many grow wild in open city lots and around the headlands that surround three sides of the town. This is especially true in the spring when the entire peninsula is in bloom. 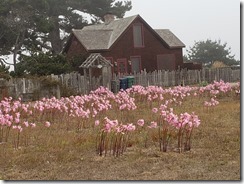 And speaking of wild plants, don’t forget the wild blackberry bushes that offer a tasty snack along many of the roads or the colorful (from green, to red and deep purple) display of Beach Saltbush and Sand Verbena that carpet the headland’s dunes. Whatever the style or color, they are almost as important as the old main street, the lumber baron mansions (now Inns), the headland, the few remaining wooden sidewalks, and the water towers in defining Mendocino’s unique character.

While Mendocino continues to be an incredibly beautiful destination, we do wonder about its future:

No matter what, we will continue to visit the area for its beauty and wonderful experiences.