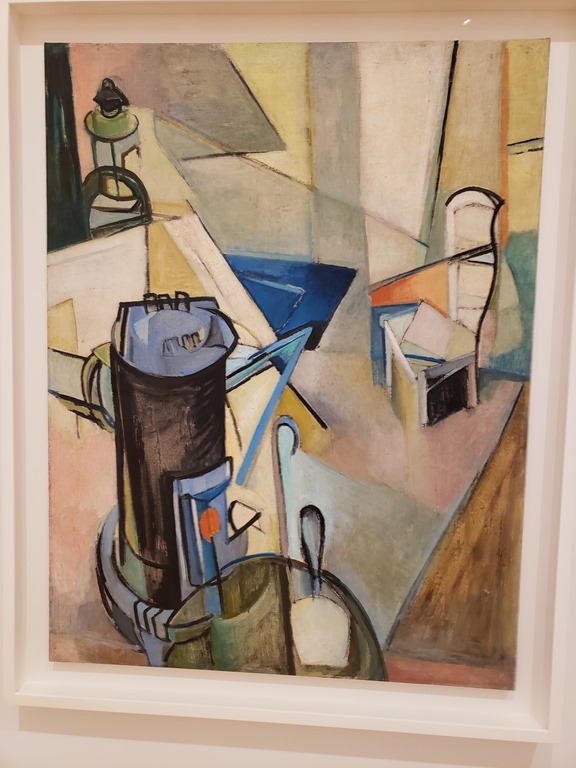 San Francisco Museum of Modern Art (SFMOMA) currently has an exhibit on Joan Mitchell (September 2021 – January 2022) called  Joan Mitchell: A Life Lived through Color. It traces the evolution of her art over 50 years from 1940 through her death in the 1990s.

Born in Chicago in 1925 and earning a degree at the Art Institute of Chicago School of Art, she spent her transcontinental career shuttling between New York and France.

The first of the several gallery exhibition begins with a couple of her early, Cubist-influenced works. 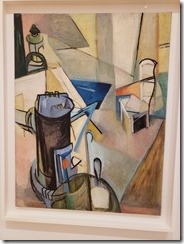 She then migrated to—and rather quickly beyond—Abstract Expressionism. She was, in essence, a landscape painter, creating not representations of physical landscapes, but her subjective and emotional feelings about and memories of the atmosphere of the scenes and the moment. These were represented not by rolling landscapes, trees of dramatic coastlines, but by vivid combinations of colors and textures portrayed in combinations of long, heavy brush strokes, dense color fields, and thin washes. 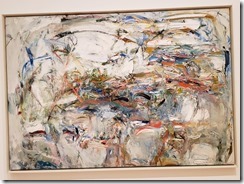 Subsequent galleries are generally organized chronologically. They trace her career through her first solo exhibition in 1952 with her light, subtle use of colors and forms, through an expanded palette of more vibrant colors and larger-scale, multi-panel works of the late 1950s and early 1960s and her squeezing or throwing paint directly from tubes and scraping and painting it into the canvas and shifting from her previously linear brushstrokes into longer, more freeform, more slashing styles. 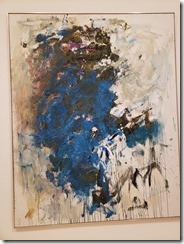 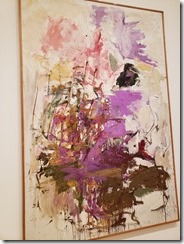 By the 1970s, she had begun incorporating heavy blocks of saturated paint, subtle washes, and bold lines into her work, using thicker, longer brushstrokes and an expanded palette that included greens, reds, and purples. These included combinations that never should work together, but that somehow do. 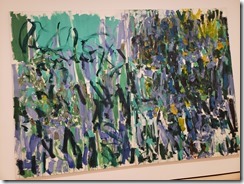 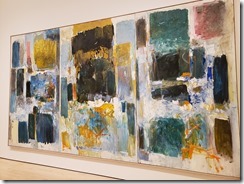 While poetry and music always exerted strong influences on her work, this work became more explicit in the 1980s, as with her direct collaboration with poets and composers, including by creating art that expresses the themes of the poetry. Music also began to play an increasingly direct role as a sister and friends died and she herself became increasingly aware of her own mortality. This took the form of paintings that attempted to portray the emotional texture of music on canvas and the use of dense, concentrated, and interwoven forms in large, multi-canvas pieces. 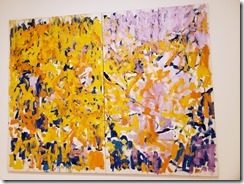 This stage also included several homages to here spiritual hero, Van Gogh, including a series of sunflower paintings. By the late 1980s and early 90s, her brushwork became even bolder, her colors more intense, her contrasts more overt and her emotions even more expressly. 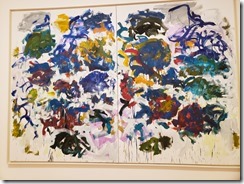 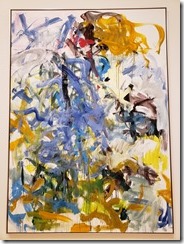