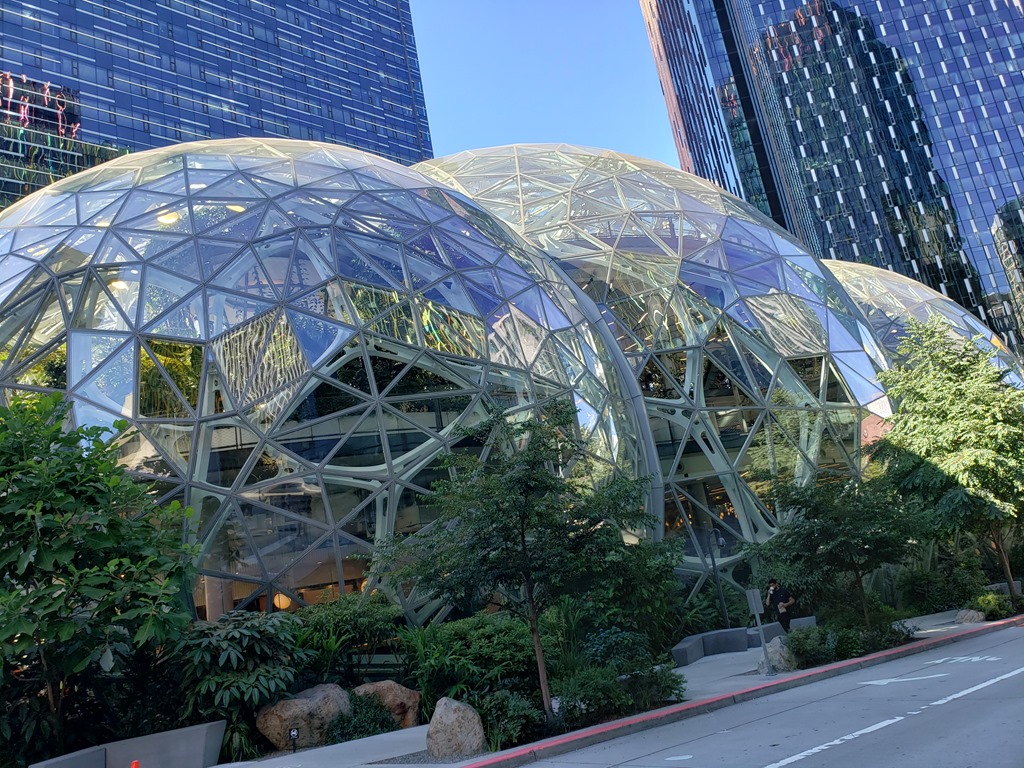 Seattle Washington is another one of our favorite large U.S. cities to which we have not revisited for too many years. Our 2021 trip allowed us to get back to the city, where we wandered around various neighborhoods.

Since we don’t spend much time shopping in stores, we focused our downtown stops on architecture and art. We visited the Seattle Art Museum which provided a high-level overview of world art with several particularly interesting Chinese and Japanese pieces and several pieces from contemporary Washington State arts and the intricate elevator gate from the old Chicago Stock Exchange building. Our visit also managed to coincide with two temporary exhibitions, one a retrospective of the work of a woman Aboriginal artist and one on a particular phase of Claude Monet’s work. For more details on the exhibit, see our blog on Seattle museums.

We also made stops at the following:

Seattle Center was originally built as the home of the 1962 World’s Fair. It is dominated by the 604-foot Space Needle. The tourist, arts, and educational area also retain other remnants of the fair including the:

The center is also home to two cultural and arts centers (Museum of PoP and Chihuly Garden and Glass, which we explore in more depth in our Seattle museum blog.

Seattle’s waterfront area is beautiful. In addition to just watching the ferries on the water, we particularly enjoyed two sites:

Pioneer Square was the first city settlement. While very historic, it has always been pretty run down. This is especially true now that homeless encampments have popped up here during Covid (as in all major West Coast cities). Among the most interesting sites are:

While we spent much of our time in the above very touristy areas, we also wanted to explore some of the city’s near-in neighborhoods. Although we did have a couple of specific destinations in some of these areas, most of our explorations entailed semi-random walks intended to gain general, impressionistic views of the different areas. Our self-directed neighborhood walks included:

The Queen Anne area of Seattle is a mixed residential and commercial area. It includes Seattle Center (discussed above) and provides a contrast to many of the central city’s more contemporary buildings and feel. Developed in the late 19th and early 20th centuries, Lower Queen Anne is characterized largely by older multi-family buildings while Upper Queen Anne is largely older, well-maintained single-family homes. Highland Ave, and especially the area near Kerry Park, which provides panoramic views of the city, the bay, and Mt Rainier, has some particularly upscale homes and apartments. We spent one afternoon just walking the pretty neighborhood and exploring a couple of its restaurants, plus another day devoted almost entirely to Seattle Center. Unfortunately, however, our other primary planned stop, the Bill and Melinda Gates Foundation Discovery Center, which provides interactive exhibits and guided tours of the foundation’s multiple philanthropic ventures, was temporarily closed due to the pandemic.

This younger area, and especially the blocks around 12th Avenue and Pike and Pine Streets, have more than its share of popular, trendy, and often loud bars, restaurants, and breweries. While we were there on Sunday and Monday evenings, many of the area’s meeting places and favorite stops had large crowds.

We mostly focused around Valley Street, Fairview Ave, and Lake Union Park in this area–the areas bordering the pretty lake and its leisure boat marinas. These streets are home to a number of upscale restaurants such as Daniel’s Broiler and Duke’s Seafood and some fun bars, such as the large, almost block-long Flatstick Pub with its indoor miniature golf and “duffleboard” courses. (Duffleboard is a form of tabletop shuffleboard played with pucks and handheld “pusher” cues on felt-covered tables with miniature golf-like obstacles.)

The south shore of the lake is largely dedicated to Lake Union Park from which you can swim, kayak, and canoe. It is home to the Seattle Museum of History and Industry, the Center for Wooden Boats, a historic boat wharf, a Model Boat Pond, a water fountain through which children run and ride bikes and scooters, and beautiful views over and across the lake.

Belltown is an area just north of Pike Place Market area. It consists largely of newer, relatively upscale multifamily apartments and condominium buildings. We did run across a particularly interesting building in our wanderings, a brick building on the corners of Second Ave and Lenora whose brick façade has been carved in bas relief with historical images and stories.

Madison Park is largely a residential neighborhood on the Eastern edge of the city that is on the shore of Lake Washington. Although we were drawn to the area by a restaurant, we used the opportunity to explore the city’s Japanese Garden (pretty, but a bit of a disappointment relative to those in San Francisco and even Portland) and a small corner of the Washington Park Arboretum and Botanical Garden. Although we would have also liked to visit the city’s Asian Art Museum, it had not yet reopened from the pandemic.