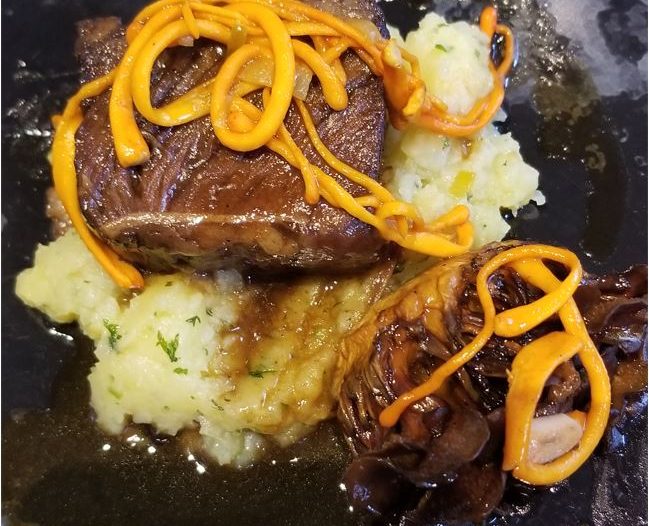 It has been too long since we have been able to enjoy an in-person dinner that paired food with wine due to Covid. But they started reappearing in the San Francisco area.

San Francisco’s Vault Garden teamed up with the Vine Connections (an importer that specializes in Chilean and Argentinian wines) that paired a five-course dinner with wines from the Andes. Throughout the meal, Elizabeth Butler, Vine Connections Director of Wine, provided a very interesting commentary of the wines from Chile and Mendoza and how many of the geographies were similar to some of California’s own wine regions.

We started off with the food paired with wines of Chili. And what a start it was.

The innovative appetizer was Asparagus and Avocado Carpaccio. It contained goat cheese, tarragon, and spring onion.  Not only was it a beautiful presentation, but the blend of flavors was also spectacular. The wine was a perfect compliment: a 2018 Chilean Amayna Sauvignon Blanc from Chile’s Leyda on the Pacific Coast. The slightly salty, lemony minerality of the wine worked beautifully with the slightly bitter raw asparagus and the richness of the avocado and goat cheese. We didn’t leave a single bite.

The next two dishes and wines sounded interesting, but we found both to be somewhat lacking.

The small Pork Pate dish with shaved ham and stone fruit jam served with parker house rolls and some nice pickled, whole-grained mustard was nondescript. The 2019 Chilean Bouchon Pais Salvaje from one of the country’s southern-most wine regions of the Maule Valley has a very interesting story. The Pais grape has the distinction of being the first European grape brought to the New World. Missionaries in the 16th century brought it due to the hardiness and high yield of the vines. While many of these vines were replaced with those with varietals that yielded higher prices, seeds managed to find their way into nearby forests and began growing among and in the trees next to the vineyards. The grapes are 100% organic, 100% dry-farmed, and 100% wild. But although the story is interesting, we were less impressed by the very light-bodied wine and strawberry-like flavors—somewhat similar to Gamay. While the wine did work with the pork, we found neither to be especially interesting.

We then moved onto Argentinian wines.

The third course and wine both sounded wonderful. The Roasted Pork Agnolotti was tasty and perfectly cooked. We were, however, somewhat disappointed with the pomegranate reduction which seemed to have broken down during the longish trip from the kitchen to the outside tables.  The paired wine, a 2017 Tikal Natural, is a blend of 60% Malbec and 40% Syrah. It is organically and biodynamically produced in the Uco Valley near Mendoza. It was lighter than we would have hoped. Our glasses had some bret in them (which we generally do not like). Our dining companions, however, did not pick this up. Perhaps our wines were poured from different bottles.

The dinner and wine hit another high point with the entrée. The food was a very hearty, very well prepared Slow-Roasted Beef Shortrib with Maitake and Cordyceps mushrooms and Cordyceps jus. Talk about feeling like you died and went to heaven! It was very tender and very flavorful. A deep-bodied, high alcohol (14.5%) Argentinian Cabernet Sauvignon accompanied the food. The 2019 Mendel Cabernet Sauvignon was grown at a very high altitude of almost 3,500 feet in Argentina’s Lujan de Cuyo region. It was aged in a combination of new and neutral oak barrels for 12 months. It tasted of cassis and spices and, especially given its youth, surprisingly low tannins. (Remember, Southern Hemisphere grapes are harvested in spring rather than in autumn of the year.) While the low tannin and acid will limit the wine’s aging potential, it will remain very drinkable and will develop more complexity over the next few years. Our table felt that it paired equally well with the previous dish too. And here is the best part: it is a steal at a mere $24-$27 retail price!

Dessert was another high point that came by way of New Orleans. A plateful of sinfully good Sweet Citrus-Dusted Beignets served with three different complementary accents—lemon curd, rhubarb jam, and a pistachio emulsion. Now if only we had a wine to go with them but our wines were all gone.

Although we had a few qualms over a couple of the dishes and the wines it was, overall, quite a nice meal and a nice exposure to a handful of South American wines.

For more on wines from Chile and Argentina, check out our blogs from when we traveled there: