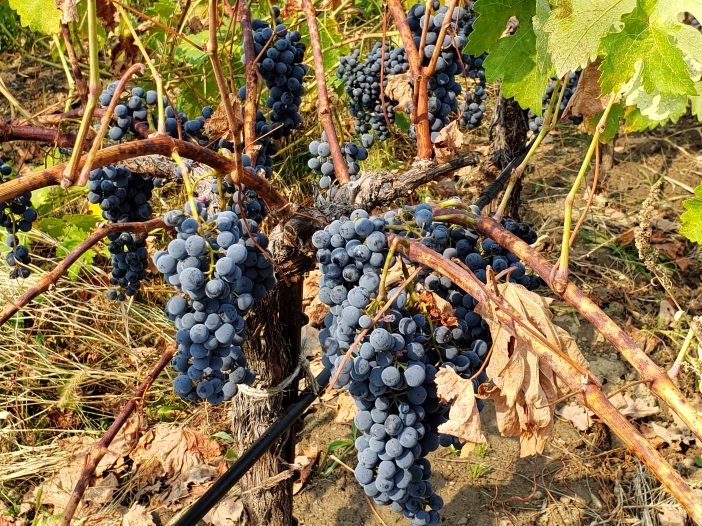 When we go to Oregon for wine tasting, we usually go to the Willamette Valley. But after an early 2020 Oregon Wine tasting that took place in San Francisco, we wanted to branch out in our knowledge of Oregon wines. Craving a limited (and safe) car trip from San Francisco during COVID, we headed to the Rogue River Wine AVA region. Although we typically skip winery and vineyard tours, we took a deeper dive into three wineries there that were particularly well known for their organic and biodynamic farming processes. As expected, the tours ended with tasting some great wines.

The Rogue Valley AVA is in southern Oregon and is about a 6-hour drive from San Francisco.  It isn’t as well known as other Oregon wine regions. It only has about 20 wineries that are located in three adjacent, but distinct river valleys (Illinois River Valley, Bear Creek, and the Applegate River Valley). Each valley has different microclimates. The soils are also diverse and include metamorphic, sedimentary and volcanic soils. The area can grow grapes that do well in both cool and warmer climates such as Merlot, Cabernet Sauvignon, and Sauvignon Blanc. It only became an official wine appellation in 2001.

The Applegate Valley AVA is approximately 50 miles long and follows the Applegate River. It has longer, warmer days, larger “diurnal shifts” (the difference between day and nighttime temperatures) and shorter growing seasons (which result in higher acidity and lower alcohol levels) and more granite in its generally alluvial soil (which provides higher levels of acidity and minerality) than other wineries in the Rogue River Valley. We took tours of 2 wineries in the area.

Cowhorn is a pioneering, organic, and biodynamic Applegate Valley winery and farm that is named for the cowhorns that are stuffed with lactating cow manure and special herb mixture. It is then made into a tea that is sprayed on the vineyards to stimulate microbial activity in and regulate the ph balance of the soil and stimulate the roots just as the vines are coming out of their winter dormancy.

A husband and wife team of former Wall Street financial analysts (Bill and Barbara Steele) who planted the vineyard in 2005. Bill focuses on planting and tending to the crops (25 acres of grapes plus contiguous crops of vegetables–especially asparagus–and lavender) while Barbara helped design and manages a state-of-the-art winery and tasting room. The winery has one of the world’s few buildings (and the first tasting room in the world) to meet requirements for the “Living Building Challenge” certification, which is is a step above LEEDS Platinum certification. It requires, among other things, the use of locally-sourced, recycled, carcinogen-free materials; net water efficiency; and a minimum (which the building significantly surpasses) of Net Carbon Zero energy efficiency, net Positive Water.

Bill took us on a tour where he explained the nuances of the farm’s soil and microclimate, the synergies among the various crops, the importance of the cool climate in producing small berries required for bigger, richer, rounder wines, his focus on ph (typically around 3.5 for all varietals) in yielding ageable wines with nice acidity) and the winery’s preference for whole cluster fermentation (at least for those clusters whose stems have the appropriate woodiness) among other details of the biodynamic farming process.

We then adjourned to the small, lovely tasting room where we tasted the winery’s current wines of which it produces a total of 3,000 cases (not including grapes—1,500 cases worth–that it sells to neighboring wineries). These consist primarily of Syrah along with a combination of other grenache, viognier, and white Rhone-style blends. While we certainly enjoyed Cowhorn’s 2019 Marsanne-Roussanne Rhone blend and its 2016 Grenache, we were entranced by a number of its award-winning wines including its 2019 Spiral 36 (a blend of Viognier, Marsanne and Roussanne), 2016 Grenache, 2015 Sentience Syrah, and our favorite, the 2015 Reserve Syrah.

Troon Vineyards was initially planted in the very rural Applegate Valley in 1972. It now produces about 8,000 cases of 14 Southern French varietals in vineyards that are managed with a fascinating combination of biodynamic and scientific farming practices. Its irrigation system is connected to the winery’s “tea” (brewed from the compost mixture) that is tailored to each of the nine stages of the biodynamic process. The water and tea mixtures doles out precise quantities of water only to those blocks of vines that require it The most interesting aspect of Troon’s winery is its diversification from its traditional stainless steel fermentation tanks to the type of large (accommodating about 8,000 tons of grapes apiece) wooden casks that are more common in Europe; and especially its small, but growing use of terracotta clay amphora which is similar to, but impart more favor than concrete “egg” fermentation tanks.

After a tour of the vineyards, the pretty, still-in-progress landscaped gardens, and the winery, we adjourned to the tasting room and patio to taste several of its current-vintage wines and a delicious plate of local charcuterie, cheeses, jams, and mustards.

We started with its 2019 Estate Piquette (a refreshing, low-alcohol, high acid wine produced from Tannat, Sauvignon Blanc, Primitivo, Vermentino, Marsanne, and a number of single varietals and blends, including some of its (non-Estate) “Kubli Bench” wines (which include some grapes from Cowhorn Vineyards).

We especially enjoyed a number of blends including its 2019 Kubli Bench Estate Rose (a refreshing combination of Tinta Roriz, Primativo, and Grenache), 2017 Estate Cuvee Pyrenees (made from Malbec and a relatively rare U.S. planting of Tannat), 2018 Applegate Valley Cotes du Kubli Rouge (Syrah and Grenache) and our unanimous favorite, a 2019 Kubli Bench Estate (a blend of Riesling, Vermentino, and Viognier).

We then crossed into the southern end of the Rogue River Valley.

We only stopped at one winery here, and what a great stop it was! Irvine & Roberts Vineyard is unusual for the region in that its location is between two steep mountains which provide the drainage, minimal sunlight and cool ocean breezes that the family’s friend (Willamette Valley pinot pioneer, Ken Wright) told the surprised owners that the site, which originally contained the family house, appeared to be ideal for growing Pinot Noir. Soil tests proved Wright to be correct. The winery focused exclusively on Burgundy grapes (Chardonnay, Pinot Noir). More recently, it began producing Pinot Meunier, from which it produced a couple of years of single-varietal wines and which it plans to use in a forthcoming line of sparkling wines.

We sat on the beautiful patio overlooking the 36 acres (on its way to 50) of vineyards that line the steep hillside. Here,  owners Dionne and Doug gave us an overview of the winery and an elaborate tasting of wine, accompanied by a plate of local charcuterie, cheeses, jams, and house-made crackers. (Dionne also graciously gave us the recipe for the crackers made from local seeds which we especially enjoyed).

We began with a tasting of the winery’s 2017 and 2018 estate Chardonnays and Pinot Noirs before proceeding to some of its limited production wines. Dionne and Doug explained the unique site and microclimate as well as the vineyard sites, fermentation process, and barrel mix for each of the wines we tasted. We especially enjoyed the 2018 Estate Chardonnay, 2018 Convergence (a barrel-select Chardonnay), 2017 Clandestine Pinot (4407 clone on a separate root stock). But our overall favorites were the elegant 2017 Elevation Block Pinot Noir and 2017 Pinot Meunier.

And what is wine tasting without food? We ate at 2 places during our trip, both of which provided safe outside dining during COVID.

River’s Edge Restaurant is in Grants Pass. We dined on the pretty, three-tier patio overlooking the river with another couple of friends. We shared two very nice Oregon wines from the reasonably-priced wine list: a 2018 Del Rio Pinot Gris and a 2017 Archery Summit Willamette Valley Pinot Noir. We had two mediocre appetizers (fried oysters and flatbread with tomato sauce, mozzarella, and arugula) and two very good, generously sized entrees—wild-caught pan-seared scallops served on coconut rice cakes with lemon beurre blanc and hoisin drizzle (with asparagus and carrot curls) and wild, honey soy-glazed, cedar plank Colombia River king salmon with whipped potato and asparagus. Dessert was a fresh wild berry crumble with ice cream. We enjoyed it so much that we vowed to return again.