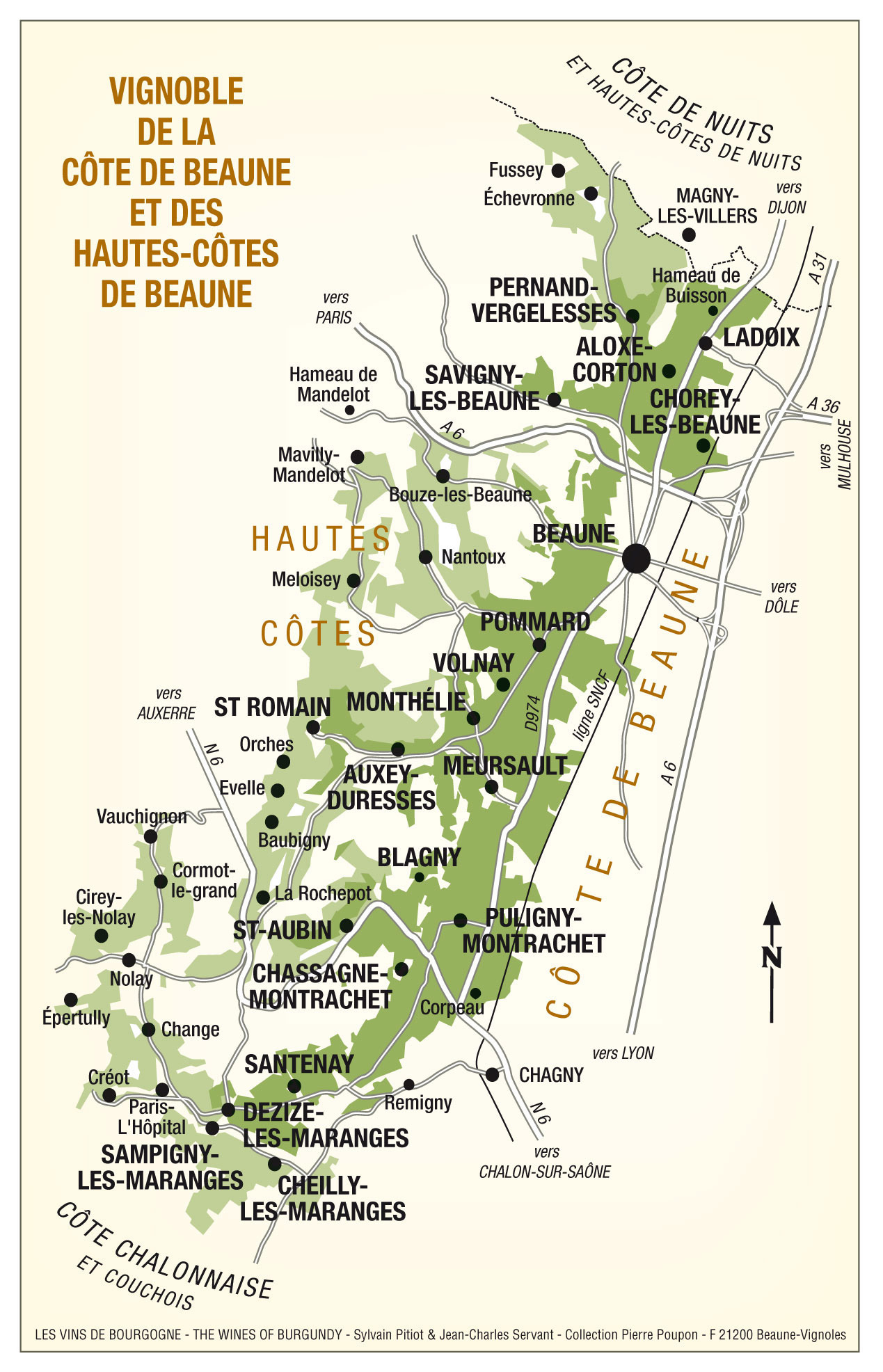 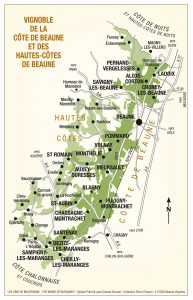 The main purpose of our trip to Beaune France was to visit the Cote de Beaune Burgundy wine region.

We spent one day in the area on bikes: electric bikes to be precise. This was our first time on electric bikes. We rented them to explore about half of the 22 km “Voie des Vignes” bike trail. The lovely trail avoids main roads by following little-trafficked roads through the region’s vineyards and is a joy. The route is clearly marked, at least through the town of Meursault, where we lost the trail and ended up on the road before we found our way back into the vineyards. We biked through a number of quaint lovely wine towns and through beautiful post-harvest, autumn vineyards whose leaves ranged from green, through yellows, through vivid reds and purples. And as a bonus, the trail is relatively flat, with few hills (although the electric bikes made fast, easy work of the few hills we did encounter).

But enough about the trail and the bikes. How about the appellations and the wines?

We biked straight down from Beaune to Puligny-Montrachet.

This appellation addresses our preferred taste profiles for both white and red Burgundies. The whites tend to be minerally, with a green apple-like tartness and acidity, while still having a creamy finish. The reds tend to be opulent with a combination of red and black fruit, leather and in some cases, a bit of musk. We stopped at one of Puligny-Montrachet’s premier wineries:

It was then time for lunch and a chance to taste a couple of other Puligny-Montrachet Premier Crus.

Then, well-fortified for our return bike trip to Beaune, we made selective stops at some of the appellations we passed on the way down.

We stopped at Moillard-Grivot where we had an incredible tasting. We began with whites, all of which see at least 12 months in oak. We started with Village wines from three neighboring areas to portray the differences among central Cote de Beaune locales. These were two 2016’s a Saint Roman and a Meursault, followed by a 2017 Puligny Montrachet, a richer, more complex, more buttery wine that is pretty much at the top of the Village chardonnay spectrum. Moving up to the Premier Crus, we began with the 2016 Saint-Aubin (Saint-Roman and Saint-Aubin are both satellites of the more highly regarded Meursault and Puligny-Montrachet appellations) and the more highly regarded (including by us) Chasagne-Montrachet “Le Grande Montagne” 1er Cru (which has a toasted nut flavor and is more buttery). Where can you go from a wine like this? To a Grand Cru, of course: a fresh, wonderful, still ageable 2007 Chevalier-Montrachet, one of Burgundy’s seven Grand Cru appellations.

We then went on to sample a few of the winery’s pinot noirs, one from each classification. We began with two Pommards—a somewhat acidic, 2015 Pommard Village, followed by a more interesting 2012 “La Platiere” 1er Cru. Then to the piece-de-resistance, a 2011 Corton Les Marechaudes Premier Cru, an incredible wine from a tiny appellation that lies on the border of Cotes de Beaune and Cote de Nuit and is the only one in all of Burgundy to be classified as Grand Cru for both its white and red grapes.

Our host explained that while the soil was the primary determinant in a wine’s classification, a number of other factors are also considered. These include the number of vines per meter, the number of grapes per vine, the sorting requirements, the time spend in barrels, the percentage of new versus neutral barrels and many others—and the incredible multiples for the cost of land in progressively higher classifications.

Volnay is primarily a red Pinot Noir wine region. It produces more feminine wines that are lighter, more elegant and aromatic. As these are less our style, we biked through the town without stopping for any tastings.

Pommard is an iconic Burgundy village that produces big, masculine reds. We tasted several wines from this area:

By then, we were beginning to approach closing, not to speak of dinner time. We engaged the motors of our electric bikes, entered our destination into our GPS and hit autopilot (figuratively, if not literally) for our return to Beaune and a leisurely dinner with, of course, more wine.

We must, however, mention two other Cote de Beaune appellations. Although we didn’t have time to visit them, we did have some memorable wines from the areas.

The Chassagne-Montrachet region is the appellation just south of Puligny-Montrachet that is known for its chardonnays and pinot noirs. Although we didn’t have the time to visit this highly regarded region, we did taste two 2015 chardonnays on our trip. We had the Domaine Bernard Moreau Chassagne-Montrachet Village-designate wine at a restaurant and The Moillard-Grivot Chassagne-Montrachet “Le Grande Montagne” 1er Cru at the Meursault-based winery. While the wines obviously have different levels of complexity and different price points, both were among the best of the relative classifications of Cote de Beaune chardonnays that we had tasted.

Cote de Nuits is another area that we didn’t have time to visit, but we did visit a few of the region’s wineries on our previous visit to Burgundy. We also tasted a number of the region’s wines at tastings and at meals. These included wines from some of our favorite of the area’s appellations such as Nuits St-George, Chevrey-Chambertain, Vosne-Roman and St-Denis. This trip’s samples included tastes of:

That was about it for this trip. We look forward our next trip for another shot at its wineries.