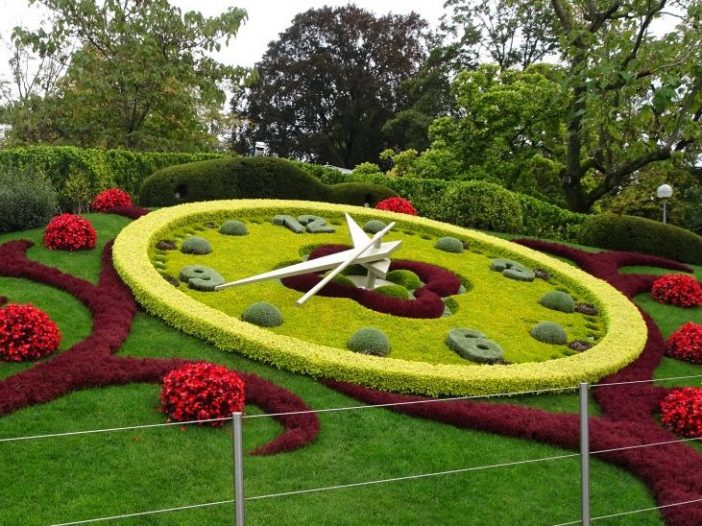 The importance of this global, cosmopolitan city belies its small size of fewer than 200,000 residents. Although Geneva is a second-tier financial center, its more important role is as the headquarters city for more than 250 international organizations including the United Nations and the International Red Cross and Red Crescent (the latter of which was founded in Geneva). It is also home to one of the world’s leading scientific laboratories, CERN (the European Organization for Nuclear Research).

Our first goal in visiting Geneva was to arrange a tour of CERN. We discovered this is a devilishly difficult task as they receive two times more guided tour requests than they can handle. We failed in our multiple several attempts to score a tour. Although one can visit the permanent exhibits without a tour, we didn’t realize that the exhibits were closed on the day we were there.

Geneva was founded as a Roman settlement in 58 BC. It was subsumed into Burgundy as an autonomous body in the Middle Ages. To learn more, we took a walking tour which started at Place Berthelier. Berthelier was most responsible for driving Geneva’s 1815 entry into the Swiss Confederation rather than having it affiliate itself with its arch-rival, Savoy (a Duchy occupying northwestern Italy and southeastern France). The Place is also a site of a clock tower that is on a remaining section of the city wall.

We progressed to Place d’Neuve (New Place). This is the home of the Geneva Opera and has statues of Henri Donant (the founder of the International Red Cross and Red Crescent and later, the driver of the adoption of the Geneva Convention) and of General Guillaume Dufour (who won the Swiss Civil War and designed much of the urban plan of current Geneva.

From there we went to Parc des Bastions and the Reformation Wall. The Wall is a rather austere early 20th-century monument to the founders of the Reformation that ironically honors reformers (especially Jean Calvin) who insisted that the city’s previous religious monuments be destroyed. It was at this point that we learned of Geneva’s prominent role in the Protestant Reformation and the idea than man’s relationship with God is personal, rather than through the intermediary of the Catholic Church. Also of the city’ history of accepting religious refugees.

Then to the Cathedral of Saint Peter, which, ironically, was where Calvin had been the pastor. Ironic because the protestants do not believe in cathedrals and do not belief in deification, even of Christ’s initial apostles. So in at least partial rectification, Calvin insisted that the former paintings and adornment of the cathedral be removed to create the austere interior that characterizes the current church. All ornamentation was removed except for in the Macchabees Chapel which, apparently, was used as a storeroom and left as it was, until it was eventually restored to its original appearance.

Old Town is centered around Place du Bourg-de-Four, Geneva’s oldest square. This traditional main square was the city’s central marketplace during the Middle Ages. It is built around a fountain and lined by the original Renaissance-style Town Hall (now the seat of the canton) with its Tour Baudet tower, the Palace of Justice, the Arsenal (which originally served as a granary and now houses the city archives), and a number of 16th-and 17th-century buildings, many of whose ground floors are occupied by restaurants and galleries and their upper floors by residences. Among our particularly noteworthy stops here were:

The tour ended near the spot where Lake Geneva ends and the Rhone resumes its journey into France’s Rhone Valley. Our two stops here are Geneva’s iconic fountain and the city’s lovely floral clock. Here we learned that Switzerland’s famous watch industry did not develop natively. Immigrants—such as French Huguenot’s fled France’s religious persecution—brought their craft here and created one of the industries for which Geneva and Switzerland are best known.

Geneva’s North Bank is lined with upscale resort hotels and have access to the city’s most popular beach and, further inland, to the city’s primary business and commercial district.

Cite Internationale is the home of many of Geneva’s international organizations and NGOs. As we were there on Sunday, most of these facilities were closed. So we ventured out on our own, beginning at the pretty Palais des Nations. This fountain-laced public square is the center of the International City. It contains the poignant Broken Chair monument which symbolizes the fragility and strength of civilians trapped in war zones and the need to come to their aid.

This leads directly to the Depression-era building that was intended as the headquarters of the League of Nations and now serves as the European headquarters of the United Nations. While the complex and the park, with its sculptures and its monuments are usually open to the public, it was closed that day.

Two of Citi’s facilities were open.

Tiffany Hotel is a contemporary hotel in 19th-century building in the Arts District. The hotel is a 15-minute walk from the train station. We were upgraded to a suite due to our status with Expedia. The elevator is very small and only holds 2 people without suitcases. The room was comfortable and we were happy to see power plugs by the bed.