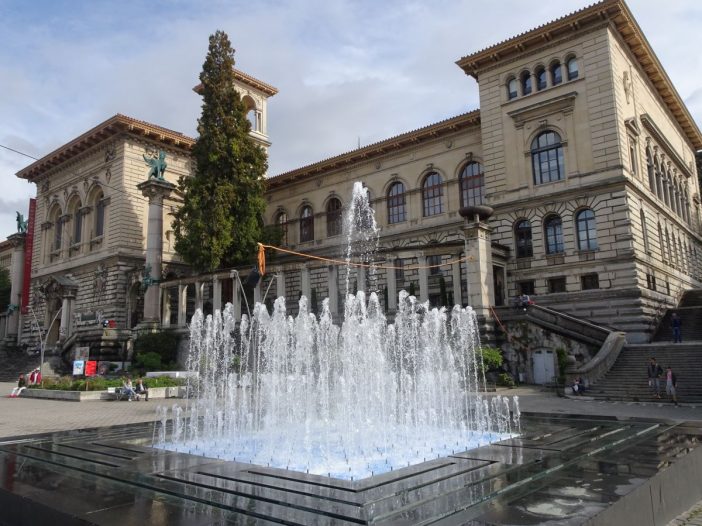 Lausanne Switzerland is one of Switzerland’s cultural and intellectual centers. It is also in the center of the country’s Vaud wine region, right between two of its premier areas, La Cote area (known for producing steely white wines, mainly from the Chasselas grape) to the west and Lavaux (known especially for its famous Dezaley vineyard) to the east.

Lausanne started on the lakefront as a Roman settlement in the first century. The city moved about two kilometers off the lakeshore to higher, more defensible ground. The city’s Old Town, with its well-preserved buildings, is located here. We began our exploration of Lausanne here. Among the primary sites are:

North of the city is Fondation de l’Hermitage. This beautifully landscaped park (complete with a huge Neo-Gothic villa) is home to a gallery with more than 800 French paintings, with a particular focus on Impressionist and Post-Impressionist works.

Our visit coincided with a special exhibit that used the entire museum to examine how artists use shadows to create moods or impressions, or use them as symbols or merely for artistic effect. It traced the use of shadows in portraiture back to Rembrandt, and more recently to Warhol. Others used shadows to create feelings of fear or foreboding or to create a mood in which a work can be interpreted.

The exhibits showed the use of shadows in all styles of art, from realism, through impressionism (Monet) and cubism (Picasso), to surrealism (with Munch a particular master in its use) and conceptualism (Duchamp). They showed shadows’ use in media including photography (especially with Steichen and most interestingly, Man Ray), cutouts (Christian Boltanski), and as fascinating sculptures in which a seemingly random, 3D assemblage of weird shapes pieces of wood come together in the shadow of a man. Other artists, such as Warhol and especially Sol LeWitt took more of an analytic approach to examining the effect of different types of styles in a series of works. LeWitt, in particular, pulled together 28 different images of a sphere with light shining on it from different angles.

Unfortunately, not much explanation was in English. Joyce’s French was a little rusty so we lost a lot of meaning in our incomplete translations. Also, the exhibit was not at all what we were expecting from the description we read of the museum’s permanent collection.

Ouchy is the city’s original port district and fishing village. While it maintains a number of its original buildings, it has evolved into a lakeside resort. It has a pleasant boat harbor, a pretty lakeside promenade with lake and mountain views, a nicely landscaped park, and a number of resort hotels, including the Hotel du Chateau d’Ouchy. The hotel is a fabulous, 12th-century castle that had been incorporated into an 1890, Neo-Gothic castle. It has been repurposed into a luxury hotel.

Ouchy is also home to the Olympic Museum. While we were unable to visit the museum, we did briefly explore its nicely landscaped gardens that are decorated with statues that commemorate Olympic sports and notable athletes.

Another interesting-sounding museum that we were unable to visit is the Collection of de l’Art Brut. It contains a collection of art produced by untrained, often emotionally-troubled, “marginal” citizens that Jean Dubuffet collected and donated to the city.

We stayed at the Hotel Des Voyageurs. The property is close to the Lausanne-Flon metro stop. Although it is close to the train station, it is also a bit uphill. But the hotel provides free Lausanne public transport to make getting around easier. This 3-star hotel felt more like 4 stars and the old town location was perfect. The staff was very helpful and the room was very comfortable. Probably the only thing missing from a great stay was the lack of a bathrobe. Breakfast was included and was mostly cold items. They did have scrambled eggs, but they were mostly tasteless.