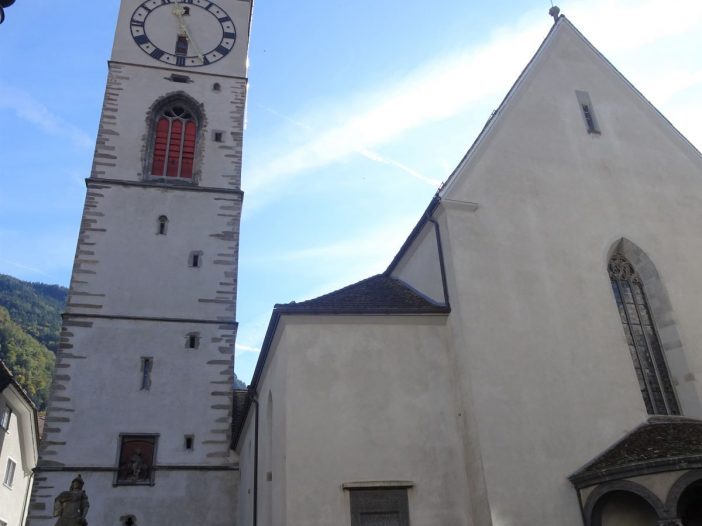 It wasn’t supposed to work out this way. We originally planned to spend a day in Zurich Switzerland, followed by a day in St. Moritz and another day on an end-to-end train trip (from St. Moritz to Zermatt) on the Glacier Express, one of the most iconic and scenic train trips in the world.

We didn’t realize that the Express gets fully booked so early. Apparently tour groups reserve a large number of seats, which leaves us mortals with a limited selection. We snagged the last 2 seats a month in advance but it required us to change our itinerary to a one night stay in Zurich (with only an hour to explore the city) and a detour to the town of Chur. There we caught the Express for a portion of its route—a roughly six-hour journey from Chur to Zermatt. While not ideal, the change gave us two extra days for a previously unplanned stop in Beaune France, in the heart of Burgundy. But more on that here https://www.activeboomeradventures.com/2020/01/06/beaune-france/.

Chur Switzerlan is a small town in the Swiss Alpine region. It was founded 5,000 years ago and is the oldest town in Switzerland. We had an hour layover before boarding the Glacier Express and we put it to a fast tour of the pretty little town.

Although we saw little remains of its ancient history, a stroll through its shopping and Old Town Districts did provide some interesting sites. These included:

This iconic train trip has operated the same route since 1930. They call it the longest short-distance train ride as it takes about 3 times longer than normal trains to travel similar distances. It is one of the most scenic rides in the world and is well worth trying to grab a seat.

Things to know about the Glacier Express

Although the entire route is beautiful, it traverses several particularly spectacular areas:

Just discussing the most dramatic sites, however, doesn’t do justice to this beautiful ride. Virtually the entire trip, other than when you are in tunnels, presents you with some combination of steep, sheer cliffs, tranquil mountain valleys, deep gorges, lovely rural villages, rushing mountain streams, and snow-flecked and capped mountains. It comes at you from both sides of the train, in seemingly random order. The biggest drawback is that too many views are into the sun (at least when we traveled). The window reflections made it tough to get good photos. And heck, even the best pictures could not do justice to the beautiful scenery.

However, the brochure indicated that the train is rolling out some needed changes including:

We left the Glacier Express in Zermatt Switzerland. This pretty mountain winter resort town virtually lies in the shadows of the iconic, 14,692-foot Matterhorn and 38 other 13,000+-foot mountains. The town is accessible only by train. It is very pretty with flower-decked, three-to-five story balcony buildings and hundreds of shops, galleries, and restaurants. The main street of the pedestrian-only town (except for electric buses and cabs that zip around it) has layers of multi-story condos along with a network of streets and walkways that thread up the mountain across the river. The town also provides convenient access to surrounding towns and mountains via a network of trains, cable cars, and cog rails.

Matterhorn views are everywhere, from the center of town and on many of the mountain trails. It is easy to see and a joy to look at, but hell to climb. With dozens of attempts to scale it, the first successful attempt did not come until 1865 (by Edward Whymper) and even that ascent took four lives. And while it is not climbed quite regularly, it has already claimed more than 500 lives.

We were told that the Five Lakes Trail is one of the most popular hikes in the area. It was all we could hope for. Leaving from Zermatt, we took the cog-railway from the “Sunnegga” station about 7,500 feet up the 15,200-foot Monte Rosa. We emerged from the cog-rail train to tremendous views of the awesome Matterhorn (views that seemed to follow us practically the entire trail), as well as about a dozen other 15,000-foot mountains and several glaciers. Although the trail itself is only about 6.5 miles, the side paths to some of the lakes, and in the case of Lake Sellisee, to the opposite side of the lake for the ideal view (see below), adds about two additional miles. It entails a roughly 1,500 feet in elevation gain, with perhaps a couple hundred more on the detours.

The trail promised and delivered five lakes. We had three favorites:

The least inspiring lakes were Grindjisee Lake and especially the Leisee Lake (which is closest to the railway stop and therefore more crowded with running children and dogs).

The hike, however, offers more than lakes and mountain and glacier views. When we visited in mid-October, the Swiss stone pines that managed to grow in the mountains sandy, scree-covered soil were turning bright yellow. These pines are quite different from the evergreen pines with which we are most familiar. The area, meanwhile has adopted the agile and resourceful marmot as something of an unofficial mascot. The city has a bronze statue of a marmot family on its main street and the first section of the trail has about half a dozen wood-carved marmot statues, each with interesting tidbits about the large (relatively 5 kg) rodents, their habitat, and their lifestyle.

Overall, it was a very good introductory hike with more views of the iconic Matterhorn (not to speak of other rugged mountains and glaciers), than you can imagine.

The Hotel Pollux is a 4-star hotel about an 8-minute walk from the train station and on the main road in Zermatt. The beds are the normal firm Swiss beds and nice, soft pillows. The room had a hot water pot for tea, bathrobes, and slippers. Breakfast had a wide variety of meats, cheese, cereal, fruit. The scrambled eggs were a little weird. Little pieces of chopped up eggs that were dry. Sausage and bacon were available. They have a sauna in the basement that you can use and a one-person jacuzzi tub.