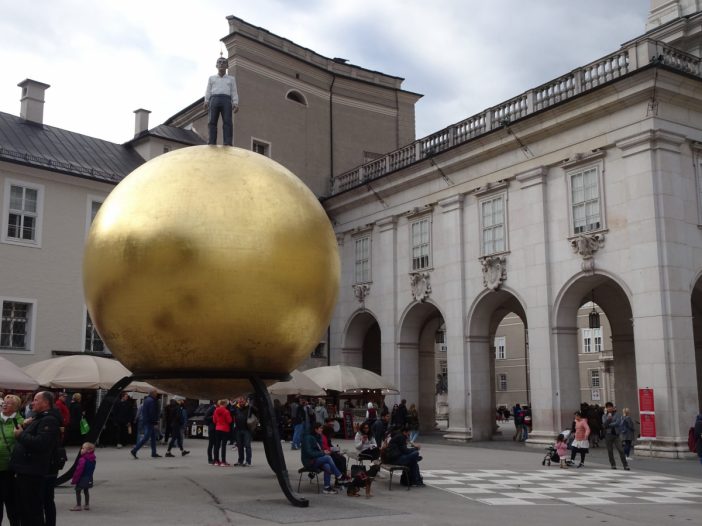 Salzburg Austria is a beautiful Baroque city that is particularly famed for being the birthplace of Mozart and the site where he composed many of his works. More popularly, it is the site of the movie, The Sound of Music.

The city is divided into three primary parts:

As usual, we took a free walking tour. Unlike many of the other free walking tours in other cities, this one was limited to the number of participants and was run by one person versus a company. Gerhard, our guide, was very good. The tour focused on Old Town, but it also covered a few of New Town’s most interesting sites, It did not visit the fortress.

An Augustinian monk St. Rupert founded Salzburg in 696. The city grew on the left bank of the river as a religious center with a number of monasteries and nunneries. These religious facilities occupied most of the higher-situated land between the river and the Monchsbuerg (the nearly vertical mountain to the south on which the fortress was located). Merchants took over the lower elevation land.

The city was an independent, religious kingdom. Its population and wealth grew rapidly due to its proximity to some of the region’s largest salt mines. This changed in 1803 when Napoléon captured the town. He closed the university in favor of establishing Munich as the Germanic education center and transferred most of its salt income to Vienna. In 1816, Salzburg agreed to become part of Germany.

Old Town is the city’s prettiest and most tourist-dominated destination in the city. Most of the tourist traffic is on the lovely, shop-lined Judengasse and to the south, which is dominated primarily by churches, monasteries, nunneries, and other religious-affiliated institutions.

Salzburg’s Old Town has remained largely a religious town though much of its history. Today it is overwhelmingly Catholic. A portion of government-collected taxes, in fact, go directly to the church. Today, many people (especially the younger people) are opting out of the church so as to avoid paying the yearly Catholic tax. Other religious options are limited. The city’s first Protestant Church, for example, was only built in the 1860s and remains the only one.

Among Old Town’s primary churches, monasteries and other religious organizations are:

Old Town’s major and longest street, Judengasse, runs parallel to the river. It is between the river and the churches, monasteries, and nunneries that occupied the higher ground. It is connected to the river to the north and to the religious sector to the south via a number of lovely passageways.

The street consists of commercial establishments on the ground floor and residences on the four to five higher floors. While this necessitated long climbs up narrow staircases, space was so tight in the confined quarter that they had few alternatives.

While the street is charming in and of itself, it is made even more so by the intricate wrought-iron brackets that hold equally intricate signs that identify the shops (a practice that was necessary when few people could read). Current businesses have to incorporate their logos into the old signs (see the McDonald’s sign).

While one could stay occupied walking up and down the lovely street (and dodging the other tourists), the area also has a number of interesting sites, including Mozart’s birthplace and the original City Hall.

Most of the parts of Old Town north of Judengasse that are not currently religious still had their roots in Catholicism. Church-related organizations, for example, founded and named many of the currently secular facilities and squares. Many of the squares that were not are named after saints.

The Festival Hall, of course, played a big role in The Sound of Music. In the movie, the hall was where the von Trapp Family Singers were persuaded to give their first public performance and from which they staged (no pun intended) their dramatic escape.

In other words, they left Austria, without opposition, before the Nazis even occupied Austria. No dramatic escape, no hiding behind gravestones in Saint Peter’s cemetery, no nuns disconnecting German automobile starters, and no long, dangerous hike through the Alps to Switzerland. Not quite as dramatic as the movie, but the reality isn’t always as dramatic as Hollywood makes it out to be.

Wolfgang Mozart was born and lived the first 17 years of his life on Old Town’s Judengasse. He then moved to New Town where he lived till age 25. While Mozart was popular among Salzburg society during the early stages of his career, few of the city’s residents knew of Mozart during the height of his career (after he left the city) and he was relatively all but forgotten over the next couple of generations thereafter. There were no recordings of his work.

The city did not begin its obsessive love affair with the artist until 51 years after his death when the city proposed erecting a statue in his honor in 1842. Ironically, the public recognition resulted from a controversy over placing a statue of someone other than a saint or an archbishop in a spot that had been occupied by one.

Mozart’s statue and birthplace, however, are just a couple of Old Town’s many Mozart-related sites. These include:

We visited a few sites on this side of the river:

Makatplatz, a square that is primarily known for the reconstructed home (and now a museum) in which Mozart lived for 15 years. We learned how Mozart’s father, Leopold, a bookbinder who later pursued his passion as a musician, taught his son Wolfgang and daughter Nannerl to play violin and piano respectively and toured as a family musical group. That was until he decided to focus his attention on fostering the career of his highly talented son. The success allowed the family to move from its cramped 100-square-meter left bank home to this more spacious 300-square-meter flat on the less populous right bank. The father, meanwhile, wrote a famous book on learning to play the violin that is still used today and another book cataloging his son’s musical scripts.

Although we did not visit this 11th-century fortress, it dominates the heights surrounding the town. It was built to protect the town during the wars between the traditional Roman Papacy and the Holy Roman Empire. It subsequently served to protect and serve as a place of refuge for the city’s successive generations of archbishops. These archbishops continually expanded and remodeled the fortress through the 17th century, when it generally reached its current state.

Hotel Goldener Hirsch is part of Marriott’s Luxury Collection Hotels. It is an upscale hotel that is in 2 historic buildings in the UNESCO area of Salzburg, right on the main walkway. Upon entering the lobby, one is warmly greeted. As a Marriott elite member, we were given a chocolate bar and then led to our room where they had to explain some things. The hotel had been recently renovated and reopened (they are still finishing up some things). Yet a few legacy things still existed. One was the light switches (which they claim were a legacy but were going to be replaced). To turn them on, you either turn the knob left or right, fast or slow…whichever works. We often gave up.  The new toilets are “washer” toilets with a remote control for the cleaning process (we did not use this feature). But try to find the button to flush? Well, it took a few minutes. And the button stuck so we had to call in help (who came with a screwdriver) to release the button so that we could flush. Yes, they are still working out the kinks. Then there is the espresso machine in the room. Thank goodness they gave us instructions on how to get hot water from it. Where is a normal hot pot that works easily? That all aside (and not enough to stop us from returning), the room was wonderfully comfortable and huge. The beds, the pillows, the slippers, bathrobes….wonderful. We had a deep tub (which we didn’t use, a shower, double sinks, magnifying mirror, and, yes, more chocolate on our pillows and chocolate with the in-room coffee/tea. The doubled pane windows kept out the street noise. As the AC didn’t seem to cool the room sufficiently, we opened up the windows in the shower/tub area which kept the whole space cool. The room had motion sensors under cabinet lights which illuminated when you made your way to the bathroom at night or when you just walked by them. A very welcomed addition. Good wifi and good space. This is the place I want to return to if ever in the area.